After #GenCon50 we now have a copy of the Gods and Goddesses by Sara & Aaron Hübrich from Jetpack7/Conceptopolis (there is a 5th edition & Pathfinder version). And it is a beautiful book with a listing of 16 fantasy deities, cleric domains, paladin oaths, new spells, and many other useful creatures & magic items. 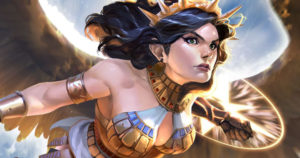 On our drive back, we were talking about the book, and thought it was a neat idea to find out which Deity would win in a battle. GOD WARS!

Since there are 16 of them, it was logical to take each of the Deities and have a Battle Royale with single elimination bracket method to determine an ultimate winner. I’m thinking of making each fight the best 2 out of 3, just to make sure it’s fair. 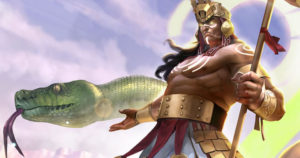 So that’s the idea, and I am setting up some brackets right now. I’m not sure if it should be totally random, and I’m going to go through and see if I can put stronger contenders against the weaker ones in the first battles.

It should be a lot of fun to run through this. If you have the book/pdf already let us know who you think will win the final battle. And maybe afterward, if this goes smoothly, I can pit the winner against some of the 5e Gods that I’ve homebrewed/converted from ‘Deities and Demigods” over the years.

You may remember them from the Kickstarter: http://www.tribality.com/2017/02/10/gods-and-goddesses-kickstarter

If you weren’t part of the Kickstarter, you can still order a book or pdf here: https://conceptopolis.com/product-category/books

Here is a series I started on Deities & Demigod conversion many a moon ago. It has been shelved, but I hope to jump back into it when life things settle down more.

Dealing With Difficult Topics in RPGs