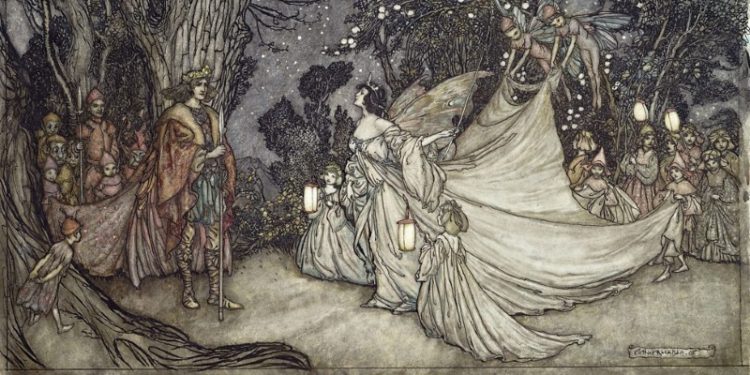 I’ve written a whole lot about the fey and Archfey here in Tribality, and I’d like to package it all into a PDF for your delectation. There’s just a few little problems. First off, the Archfey Patron is not in the OGL, and I don’t really want to deal with the DM’s Guild for this (for a whole set of reasons that I’m not going into here). Secondly, I don’t actually like several features of the Archfey Patron, as I have discussed at length in the past. My solution is to create a new warlock patron called the Fey Highlord, serving the same story role but with a different set of mythic themes.

Your patron is one of the fey Highlords, or one of the Eldest. Discuss your choice of a Fey Highlord and your character’s relationship with the Highlord with your DM, as this can have a major impact on the story and your experience of the game. Many Highlords replace one or more of these features, including individual spells on the Expanded Spells list. Other Highlords offer exclusive Eldritch Invocations.

Fey-Friend
At 1st level when you choose this Patron, fey influence makes you something more than mortal, if still less than fey. You can use your Charisma modifier in place of your Dexterity modifier for initiative checks. You can choose to affect beasts and fey with your spells as if they are humanoids. When you are the target of an effect that affects your creature type but not fey, gain advantage on any saving throw you make against it.

Law of Hospitality
Also at 1st level, you are both protected and bound by the laws of hospitality. There is no magic older than this: that the host must protect the guest, and the guest must do no harm to the host. Even the vilest of the Unseelie honor such a rule. If you breach hospitality, you lose all Pact Magic slots for 1d10 days, and all Eldritch Invocations for 1d6 days. If you are the victim of a breach of hospitality, the violator receives a bestow curse effect and fails the saving throw. Creatures with Legendary Resistance can still choose to succeed instead. This spell does not require Concentration, and you choose the nature of the curse on the creature.

Fey Fortunes
Starting at 6th level, you can lightly touch the tapestry of fate. When you complete a long rest, roll 1d20 and record the number rolled. You can replace any attack roll, saving throw, or ability check made by you or a creature you can see with this die result. You choose to do so after the die roll.

Record the die roll result that you negate. You can replace any attack roll, saving throw, or ability check made by you or a creature you can see with this die result. You choose to do so after the die roll.

Mantle of Glamour
Starting at 10th level, you are mantled in glamour like the Highlords themselves. You can weave this mantle about yourself as part of a short or long rest. While the mantle remains, you can replace any Dexterity saving throw you would roll with a Charisma saving throw.

As a reaction, you can end this mantle to deal psychic damage equal to your warlock level + your Charisma modifier to a creature that makes an attack against you.

As a bonus action, you can end this mantle to regain a Pact Magic slot when all creatures affected by the spell succeeded their saving throws against it or were immune.

Fey Soul
Starting 14th level, your soul becomes more deeply entwined with the fey and the Hidden World. You cease aging and can’t be aged magically.

While a creature within 60 feet of you is charmed or frightened by you, you can add 1d8 to your spell damage and weapon damage rolls. Gain this damage bonus no more than once per turn per creature.

I have not explored compatibility issues between this Patron and the alternate Patron features I proposed in the three Archfey Patrons articles, linked above. That’s the next step (and the compelling reason for you to eventually pick up a PDF that I plan to release, ahem). I’m also still working on a Favored of the Highlords feat; here’s what I have so far.

Favored of the Highlords
One of the Archfey has granted you great favor. Increase your Charisma score by 1, to a maximum of 20, and gain the appropriate feature below.

Two down, twelve to go. Feat design is hard, and spare time for this project has been at a premium for the past few months. (If you’d like to see one of the other things I’ve been working on, the Kaiju Codex is available from Rite Publishing on DriveThruRPG.)

I’m interested in critique of the Fey Highlord patron, but if you think I should not bother and publish all of my fey-related content through the DM’s Guild, then you’ve missed the point (that this is about expanding into a full third-party setting that I plan to publish), and you can keep that to yourself. I’ve tried to emphasize a different set of mythic notes here than the Archfey Patron does, because it’s hard to break away from a pre-existing text: the imagination is drawn to its gravity.

The Law of Hospitality feature is as much a restriction on the warlock as it is a benefit, but it’s such a part of Celtic and Greek myth (among a whole lot of others) that I just couldn’t pass it by. Fey-Friend and Fey Soul particularly explore the ways that any extended contact with the fey changes mortals, so I would retain these features even for contentious or unknowing warlock/Patron relationships. Fey Fortunes is both better and worse than the Diviner’s Portent feature – better in that you don’t declare this feature until after you see the die roll (oh yeah, it turns out I’ve been playing that wrong as my tiefling Diviner, whoops), and worse in that you get just one initial roll, so there are going to be days where this feature doesn’t give you a lot of freedom to maneuver.