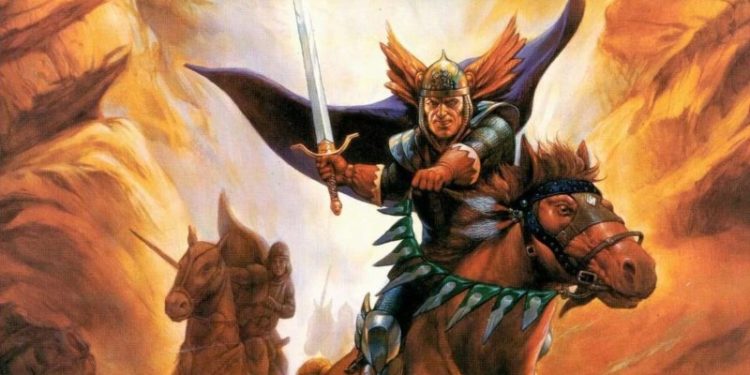 After a few weeks of talking about other things, I’m ready to tackle the next stage of the fighter in D&D, which of course means Advanced Dungeons & Dragons, Second Edition, as well as the Complete Fighter’s Handbook, Player’s Option: Combat & Tactics, and Player’s Option: Skills & Powers. If that makes it sound like I have a lot to cover today… well, yeah.

The rules of the Player’s Handbook fighter are so similar to the post-UA 1e fighter that I would almost think about posting a link to the Part Two article and calling it a day.

Pretty minimal change, as I said. No real thematic shift, because the fighter’s theme can’t shift. Or they’re not willing to dig in and really explore what the fighter can be in a definite way. Whichever.

The first of the 2e splatbooks – inaugurating the whole tradition of class splatbooks, in fact – is the Complete Fighter’s Handbook. In addition to roleplaying guidance and kits for fighters, it expands 2e’s combat rules, weapon proficiency rules, and so on. It’s a lot of patches and new subsystems on a game that had been out for, oh, several hours by that point. I’m going to try to hit the high points, but this touches enough parts of the combat system, in its mad quest to make 2e AD&D more simulationist, that it skates closer to being a new half-edition than one might expect from a splatbook.

The less said about the 2e crafting system found in this book, the better. (I am not one for saying less.)

The majority of the kits here are more like 5e’s backgrounds with minor tradeoffs, but a few of them are just a hot mess of balancing enormous mechanical advantages with roleplaying disadvantages. Cavalier kit, I am looking at you. Also, a lot of these kits get into allowing paladins or rangers to specialize in a weapon, as the core feature of the kit. A warrior class with a kit is 2e’s initial answer to a lot of 1e’s classes, because not only does this include the cavalier, it also has samurai, gladiators, berserkers (steer clear of this kit, their berserk effect is a hot mess), swashbucklers, and so on. I appreciate the reminder that all of these things fall under the fighter rubric, but they all seem to land on either “hilariously overpowered” or “+3 to one kind of reaction roll and -3 to another.” The only general boost is that kits grant warrior types bonus nonweapon proficiencies, and I am always a fan of that.

Oh, and just so I’ve acknowledged this, the kits come from a place of absolutely phenomenal 1980s white cishet privilege. The conversation has moved enough on this that even starkly retrograde new releases don’t go where this does with its assumptions of Western-European-as-default.

A lot of the book gets into single-class campaigns or even single-kit campaigns, and there’s a collection of archetypal personalities to help distinguish characters in such a setup. This is pretty strong material, as it’s actually about helping players present more memorable and compelling fighters.

Next we get into new combat rules, which is mostly collections of situational modifiers and new maneuvers that fighter-types might want to try. There’s a ground-up revision of approaches to weapon proficiencies, suggesting that someone realized giving fighters just four starting slots and asking them to spend two on weapon specialization (because you are just playing wrong if you could specialize and don’t) means that fighters have no real breadth of choice. There’s also specialization in fighting styles, which is sort of hilarious in making single-weapon fighting a better defensive style than weapon-and-shield, great weapon fighting faster than single-weapon, shield fighting just becomes a crummy version of two-weapon fighting… in short, every style’s native strengths are tossed out.

There’s a lot more here, but taken together it’s just the low-hanging fruit of supporting fighter-heavy campaigns in other cultures, and for campaigns that crave deep simulationism. There are rules for jousting, weapons and armor for less technologically advanced settings, rules for damaging armor in the course of a fight, rules for each possible kind of head cover (“no cover” is like saying “I hope the DM doesn’t remember the Called Shot rules”), and so on. Some of the maneuvers are cool, if you’ve already decided that 1e or 2e are for you.

This book is more about a variant of core and corner-case combat mechanics than anything specific to the fighter class. I can scarcely imagine anyone committing all of these rules and fiddly modifiers to memory, but then I think I have a Player’s Option-era DM screen around here somewhere, so TSR knew it too. On a positive note, there are some rules that try to make one-on-one duels more exciting to watch. It’s more or less a tabletop version of Street Fighter.

The one section that does directly discuss the fighter is the recapitulation and revamp of weapon proficiencies, which veers ever closer to being a feat system. Not that the style specializations weren’t already a feat system, mind you.

The point, then, is that all of these are Warrior proficiencies, and most of them are also Rogue proficiencies. It’s hard to see how even the best of these (Ambidexterity or Iron Will) could compete with stacking more and more weapon mastery. I don’t think anyone has missed my feelings on this, but man, late 2e design is just a hot mess.

This book offers a point-buy approach to class features, and every class chooses from the same slate of kits – which ultimately makes kits more like 5e’s Backgrounds than like 5e’s subclasses. (In case you haven’t been hanging on every little release from WotC for the past couple of years, I mention this because Mearls has compared 5e’s subclasses to 2e’s kits – but then he was talking about the kits of the Complete handbooks, not the Player’s Option series.)

Anyway, as you might expect if you’ve ever looked real hard at a point-buy system for races and/or classes, you can guess that this is awfully easy to powergame, by picking drawbacks that don’t hurt and dropping benefits you don’t expect to care about. The best I can say for it is that you can use what’s here to make an entirely passable barbarian class. Just about all of the optional features presented here could leaven the fighter’s near-absence of interesting features, and this is great if you know you’re getting into a war epic or a domain-management game. One wonders why these things are class features and not nonweapon proficiencies, though.

Having said that, there’s a wildly more interesting game implied in Player’s Option rulebooks than the game ever explores. Hand out more class-building points as major quest rewards, or as part of completing a challenging training montage. Maybe create a way to dip into other classes’ options as a further story reward. Suddenly 2e is a game with organic character growth. This also takes a ton of pressure off of choices made at character creation. Didn’t buy Leadership, because you never thought you’d get an army to lead, but now you’ve survived a few major battles and it makes sense for you to gain that feature? Hey look, we have a mechanism for that! No more campaign-long buyer’s remorse!

The non-standard features that you can trade off to buy highlight a lot of different emphases to customize the fighter, and if repackaged cleverly, you have a great subclass system on your hands all of a sudden. Movement speed, d12 hit dice, increased resistance to spells or poison, benefits to every element of mass combat and domain management… the fighter shifts from an Everyman to properly representing the breadth of concepts that the class description always claimed.

Thanks for coming with me on this journey through 2e. I have no doubt in my mind that there are Dragon Magazine articles and other variant fighter options that I’m overlooking; the one I know about is Dark Sun’s Dragon Kings supplement. I wonder this kind of thing a lot, but – if you played a Dark Sun character from 1st level to Dragon Kings epic level, please tell me about it in the comments, because I would absolutely bet that less than 1 person in every 300 sales of that book got any use out of it beyond an interesting read. Let’s be real, though, fighters were not the interesting part of that book! Preservers, defilers, and psionicists are where it’s at in Dragon Kings.

Injustice 2 and the RPGification of Other ...