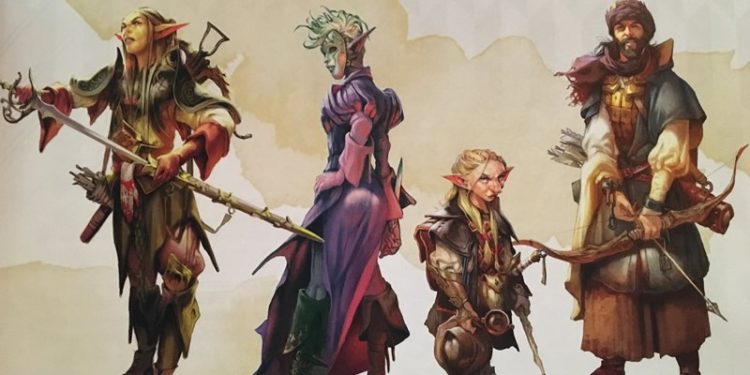 Today I’m taking my best shot at the ranger and rogue subclasses of Xanathar’s Guide to Everything. With seven in total, I may have to be a bit briefer than my usual. Or not. I’ll find out as I write, I guess!

Barbarians and Bards | Clerics, Druids, and Fighters | Monks and Paladins | Rangers and Rogues

The additional flavor text for rangers says, “A relationship with civilization informs every ranger’s personality and history.” That’s an awfully broad brush – the rejection-of-civilization idea here and in the Views of the World table fits almost none of the rangers I’ve seen people play. I’m so not a fan of the idea that rangers – more than even druids – have some superiority complex over cities.

This is particularly perplexing for the Monster Hunter, who is all about taming the demon-haunted wilderness. Those cities are the points of light that give the ranger anything to protect. I’ve criticized decades of ranger class design for making them a walking hate crime, and this is the same but different. (The fact that American politics is now wrapped up in telling the rural population that people in the cities aren’t real Americans doesn’t help my outlook here.) The Homelands and Sworn Enemies tables are not especially inspiring either, to my mind.

Oh, and if you think I don’t have strong opinions on ranger subclass design, you must be new around here. I published my own! (With help from Tribality Publishing, that is.)

Hey, a subclass that has seen use at my table! In its UA incarnation, at least. At low levels (5th and below), it didn’t really sell itself as all that separate from a Hunter, but I think the player has had a good time. One of the interesting things about all three of the subclasses is that they expand the spellcasting options, as the Hunter and Beast Master notably didn’t. Five bonus spells known is not a joke when it comes to the ranger’s tiny number of spells known.

This definitely brings the skirmisher side of the ranger to the fore. It grants some early heavy hitting, improved spell selection, and near-total dominance in a situation that might be common. It’s surprising how much emphasis this puts on weapon attacks. If I hadn’t been following this since its UA debut, I would have expected more manipulation of shadows, sort of in line with the Way of Shadows monk. Overall, I think this is fine, though that might change in either direction over the course of play.

Back in 3.x when the Horizon Walker debuted as a prestige class, it was about exploring ever more exotic locales – that is, adding more and more terrain masteries. The first five levels are natural terrains appearing on the Material Plane, while the last five levels are (nominally) supernatural terrains appearing outside of the Material Plane. Thematically, they’re great; mechanically, well, it kind of depends on how good your a la carte selections are. The 5e Horizon Walker subclass… isn’t that. This is the planar warrior, more suited to life in Sigil (that’s with a hard G, as in goat and .gif, because the Planescape designers were sadists). Anyway.

This looks to me like the bleeding edge of acceptable power level. It matches Gloom Walker’s situational dominance with… not-situational dominance. This is great at what it does (that is, raw damage output), and it does it in almost all common circumstances. Overall, Ethereal Step is not much of a defensive option compared to Iron Mind or the Hunter’s 7th-level options (which are themselves underwhelming in a lot of cases). By ranger standards, then, maybe a bit fragile before 15th level. That damage output, though…

Here I just want to say that I think this is a stupid concept for a subclass. It says on the tin that you do what literally every other character class does, because this is D&D, fer cryiin’ out loud. Also, there’s literally a subclass called Hunter already – what part of the Monster Slayer’s theme did the Hunter not cover?

Okay, this is the ranger that goes deeper on defense than damage output. It’s interesting to see what that even looks like. The answer is, of course, blue-decking, though it could be a lot more obnoxious about that than it is. Slayer’s Counter is probably the most aggravating feature here, form the DM’s point of view, and even that is in bounds for a 15th-level subclass feature. Mechanically, I like what I see here, and I’d just call this ranger the Inquisitor to negate my nitpicking of the nomenclature.

The generalizations that the opening flavor text makes about each class continues its string of applying to a minority of all rogues. In this case, it’s the emphasis on acquisitive drives – sure, that’s on point for the Thief, and probably the Arcane Trickster and Mastermind. (But not Nate Ford, so your argument is invalid.) It fits some Assassins (who are here for the contract’s payout, not the target’s treasure), and some Swashbucklers, especially the piratical ones. Inquisitives and Scouts? Uh no.

That said, I like the Guilty Pleasures table just fine. The Adversaries and Benefactors tables, though – these are solid fucking gold. These tables rip off Blades in the Dark’s character connections in the best possible way. Literally every class should have something exactly like these, as a core part of character creation. These are doing the work that Bonds were created for, and they establish setting and clarify your position in that setting. This is an A++ topic for a PDF to expand upon.

Also, this is another area where I did a bunch of design work in the misty reaches of the past. Here are my long-ago takes on the Inquisitive and the Mastermind. I’d love to be the kind of person who would be utterly unbiased by this, but I am only human. Well, humanoid. Bipedal and largely sapient, all right? It’ll have to do.

This is the one for being a detective, and for hyper-specializing in a subset of rogue skills.

Overall, the Inquisitive turns contested skill use into combat viability in a way we mostly don’t see outside of grapple builds and subclasses. I can’t quite make up my mind that I love what goes on here, but I am enough of a fan of the characters it’s trying to model that it would be hard-pressed not to go for it, if I were playing a rogue with decent Int and Wis. (Oh, right, that’s the other thing – the Inquisitive is multiple-attribute-dependent as hell, because it’s so skill-dependent. So that’s why most versions of Holmes tank Cha so hard…)

I love me some masterminds, though they are super hard to play in a game if the other players aren’t explicitly invested in you doing that. The Leverage RPG and Blades in the Dark go deep on mechanics for that leading/supporting rogue role. So how ‘bout 5e? (Yes, I know that the Mastermind was first released in the Sword Coast Adventurer’s Guide, but I didn’t write a breakdown of that book, so here we are.)

I like the features available here for antihero or lovable-scumbag styling. It goes lighter on the leader/support function than I’d like to see. You’ve got Master of Tactics and… everything else is fairly selfish in style. Information-gathering through Insightful Manipulator is good, though the information is not the most broadly applicable, and Soul of Deceit is great for being the guy who takes the fall and goes to magic interrogation for awhile (another key theme of BitD’s Spider playbook). All told, I think I’d like to see a second feature at either 9th or 13th that is a bit less situational and more leader-like.

This is the ranger that is not a ranger. If you want a non-spellcasting ranger, this is (probably) the best offer you’re gonna get from WotC. Also, it’s a good way to fit a rogue into a campaign centered on a tribal or rural society.

Ultimately the Scout is a slow build, but it’s a worthy non-spellcasting ranger. I might wish for something in the vein of Favored Terrain to help cover the ranger niche, but it’s not the biggest deal. If you’re especially good at perfect positioning on a tactical grid, those early levels look a good bit better. I like this pretty well, and in the right campaign frame, I’d play it.

This is a front-line melee rogue – one of the only roguish archetypes to explicitly care about melee, in fact. This is a concept I always wanted to play in 4e; there were some rapier-friendly powers that looked like a lot of fun to me. A friend of mine – hi, Jeremiah! – played a variation on it in our 4e Eberron game, and he had a good time with it. Also, there was this game, you probably heard of it… 7th Sea? Yeah, you could wrap up most of that whole game in this subclass.

The main thing I want that I’m not getting is explicit support for bucklers or cloaks as off-hand defensive tools. Is that super-specific and not supported elsewhere in 5e? Sure, so what? It’s in the name of the archetype. You’re strong in both melee and social scenes, but you’re not getting the +3d6 or double Sneak Attack that we see in XGTE’s other archetypes.

Whatever else I might say about the ranger and roguish archetypes in this article, their gameplay loops in combat are clear and I admire that. Gloom Stalker is probably the weakest on that point, since you can’t control some of the things that make it special, while Swashbuckler and Inquisitive are probably the strongest. (Horizon Walker is the most potent, but optimal play takes a lot of careful judgment calls.

Next time around, I’m going to do my damnedest to finish the subclasses of XGTE.

TagsarchetypemastermindrangerreviewsroguescoutsubclassxanatharXanathar's Guide to Everything
Previous Article