Today I present Saernott Isles – a fantasy area of that you can use for a one shot, as part of the Rikirta setting, or link it to other settings.

Geography : Tropical climate. There are 7 islands, each 5-30 miles across. The two largest islands have active volcanoes in them.

Many of the trees on the islands have red-purple foliage, that reflects green-blue from torchlight.

There are many Sahuagin (Faction-Demons) Humid all year round. Using magic in the water in this area seems to quickly attract them.

Interior has jungles and dry volcanic regions. Caverns below the surface have portals to Underworld. 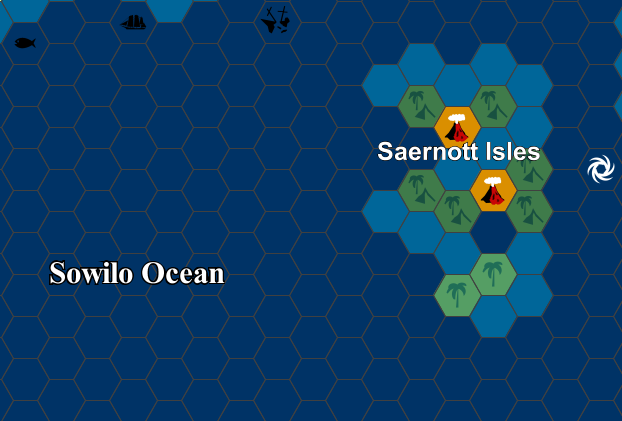 Adventure Hooks for Saernott Isles
– Sahuagin in the area have increased raids against all ships.
– Arcane guild requires some minerals only found near the volcanoes.
– A great explorer related to the PCs went missing near the southern isles.
– The prophesy tells of the ancient ones leaving their essence in the isles before moving on beyond the stars.