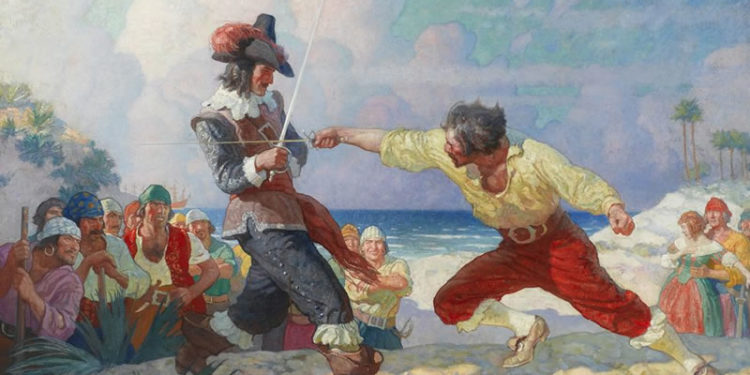 Characters who have a martial focus are often left without as many options in combat as those who have some magic at their disposal, especially if you are trying to play a more swashbuckling swordsperson. I’m looking at providing some additional combat actions for my players on top of those already found in Chapter 9 of the Player’s Handbook. There are additional combat options provided in the Dungeon Master’s Guide (see bottom of article) you can offer to players for more options during a turn. In addition, I’ve opened up the following actions for my players to take on their turn for playtesting.

BIND WEAPON
When you take the Bind Weapon action, you make a melee weapon attack contested by the target’s Strength (Athletics) or Dexterity (Acrobatics). On success, you bind your target’s weapon. While bound, you and your opponent may not use the bound weapons or move. On their turn, your opponent may use an action to attempt to free their weapon with a opposed Strength (Athletics) check or Dexterity (Acrobatics) check, or they can drop the weapon. If the creature does not free or drop their weapon, the creature can not move. While binding your opponent, you suffer the same limitations, except that you may end the bind at any time.

This could work well for players who like to control the battlefield and want to tie up an opponent versus unleashing maximum damage during a turn.

TACKLE
When you take the Tackle action on your turn, you can attempt to tackle a creature after moving at least half of your standard movement in a straight line towards your target. To tackle, you roll an unarmed attack roll. On a hit, the target takes the unarmed attack damage and both you and the target are knocked prone. If the creature is larger than you, you have disadvantage on your attack roll. You cannot tackle a creature that is two size classes bigger or smaller than you.

Similar to Overrun and Shove Aside, this action let’s a player try to get an opponent prone at the cost of being prone themselves.

THROW SAND
When you take the Throw Sand action on your turn, you can hurl sharp or stinging particles at a creature you can see within 5 feet of you. This cloud of particles could be from your inventory, such as a bag filled with glass shards, or from the environment, such as kicking up sand or embers. As an action, you must make a ranged attack to throw particles at a creature and being within 5 feet of a creature does not impose disadvantage on the ranged attack. If hit, the creature has disadvantage on attack rolls until the start of your next turn. The target must also succeed on a Constitution saving throw (DC 8), or is blinded until the start of your next turn. Once blinded, a creature may spend an action to clear its eyes of the particles and end the condition.

I really wanted to call this Blind, but it is better to keep in under powered when compared to the level 2 Blindness/Deafness spell. I’ve had a player who is better at range use this action in combat instead of trying to Disengege and it worked out for the party.

This risks getting into the complicated grappling rules of past editions, but if a player already has their opponent grappled, this could come in handy.

I tired not to step on existing spells or battlemaster maneuvers. Also, some of these might be incredibly under or overpowered. Please share your feedback in the comments below.

Additional Combat Options in the DMG

On top of the options found in Chapter 9 of the Player’s Handbook, p.271-72 of the Dungeon Master’s Guide provides the following additional new combat options for you to consider.

I’ve provided most of these as options in my current and some past campaigns. Having a player climb onto the back of a huge monster can lead to some fun moments in combat.

For newer players, I would keep the options to the Player’s Handbook, but if a players wants to be creative keep these in your back pocket. For experienced players who stick to melee heavy PCs, you might want to provide some notes on other stuff they can try out during their turn.

That’s it for this week on the Campaign Trail. If you haven’t had a chance, please check out our new Seas of Vodari website as we inch closer to our Kickstarter campaign.