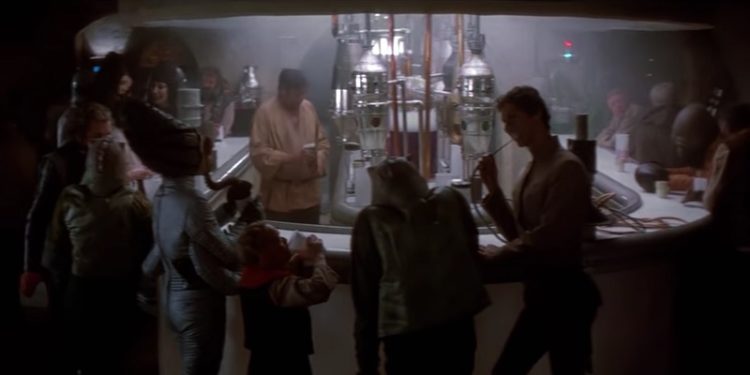 (Author’s note: Sorry I’ve not been publishing articles lately. I’ve had an eventful few months with stolen laptops, having to move home unexpectedly, massive travel time, and being under the weather. In any case, I have a new laptop that’ll allow me to get articles written.)

(Nearly) Everyone’s been introduced to a game with the penultimate classic of “You are in a bar.” But what if these types of character introductions could be made to be more exiting, interesting, and unique? With a bit of care and planning, GMs, with the help of their players can make it something more! Read on:

How do I help to make this memorable? If you look at “Star Wars: A New Hope,” the first part of the movie is Luke Skywalker’s character history along with his mentor Obi-Wan Kenobi. Yet, when they flee, in order to get out off the planet, they end up in a seedy spaceport bar with Han Solo, a scene that’s fondly remembered almost a half century later. The point here is even the most boring scene can be changed up by making the scenery and the characters in the scene different than what one would normally expect.

2 Figure out why are they’re here

This is where cooperation between the players and the GM/ DM is vital. In the list above several of the introductions are reliant on the fact that they are together in a single location due to the same circumstances at the same time. Each player could be there for a different reason, yet even among the diverse histories that caused them to get there, they are all there together. The DM could even play individual sessions with each of the characters to get them all in the same location.

3 Figure out why they want to work together long term

A party who has no reason to stick together will simply end up going their separate ways after the circumstances that brought them together end. Maybe the reason why they’re working together is because they want to help each other out. On the other hand, maybe one (or more) of the party members have ulterior motives and wish to betray them at a certain point. It could be that over time they found out that they were compatible and by helping the others out, they are able to further their own goals. Or maybe they’re too cowardly, incompetent, or squishy to venture out on their own. Maybe they know more than they’re letting on and by sticking with the group they have a better chance of surviving long term. While these types of things certainly won’t come out in an introduction, they need to be there in the character’s background(s).

4 Start in the middle of action

Instead of starting the players at a bar, in jail, as slaves, or whatever, consider having the players start in the middle of a battle, a skills contest, or whatever. This is a unique way of dealing with new players to a system. In this way the players can start to figure out the rules as they go along and the GM can call out the appropriate rolls to make. After the action is over, the scene can shift to how the characters know each other. A good world building exercise would be to start “I remember the first time we met. It was a/an (fill in the blank) and (X) detail is what I is the most vivid thing about the scene.” As the players each have their turn, adding onto the one(s) the previous characters talked about, giving more granularity or remembering something different, the GM might interject some details of his or her own into the mix.

5 Don’t forget about a character’s fit

Just like an employer wouldn’t hire anyone willy-nilly, neither should a party be willing to take on a new character for their party long term without understanding how they fit into its overall dynamic. The player also needs to understand how their introduction will shape their interaction for potentially the rest of the game. Will the new character have to fight the party before they realize they’re on the same side? Both the GM and the player need to consider a few different factors when deciding on a new character. Will the new character cause needless drama in the form of racism or classism because of its race or where it’s from in the world or how wealthy it is? How will the new character’s background interact with the existing player character’s? Will encounters be more difficult because the new player decided to choose to play a rogue rather than a mage or a druid instead of a paladin? What skills and abilities do the new character bring to the party that they would not otherwise have?

I hope these tips have given you something to think about and will think about using them the next time you have party or character introduction you need to make.