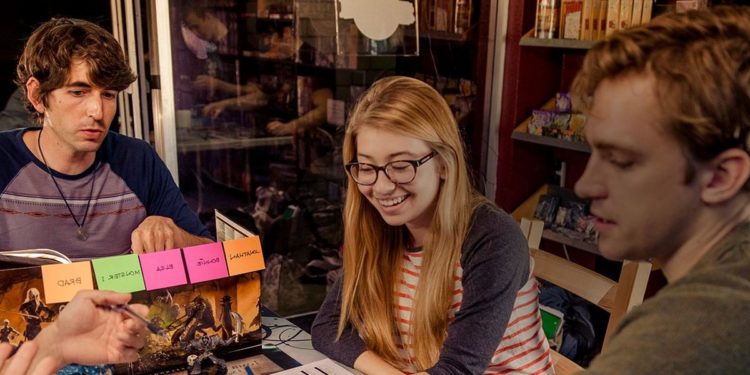 The eternal conflict… Will you play using Theatre of the Mind (TotM), or by using a grid to better symbolize movement? There are mixed opinions about both of them, and I have my very own one. So, before we start defining which of the two ways is better than the other, let’s talk a bit about how both of them work, their perks and cons.

Playing with a grid is more exact

This is one of the main arguments people say when talking about why the grid-based method both for exploration and combat works best. And they are right. By playing with a grid, you can measure each square as 5 or 10 feet to make it more comfortable during play. Most spells, weapons, movements as well as creature sizes are measured in multiples of 5fts to make life easier for us. If you get a dry erase grid, you can even draw terrain or more interesting things for the players and enemies to use. However, this leads us to the next point:

Grids and their tendency to limit imagination

Grids are 2d surfaces you can use for tactical combat or exploration… But what if this place your characters are in also has interesting places you can reach in a 3d space, like the top of a tree? Having played for more than two years with my actual group of players, I can’t remember many times any of them tried to climb to the roof of a house, position themselves on top of a tree, or similar things until I showed them it was an option with a dexterous assassin. Are they to blame for that? Absolutely not, kinda. Having seen different polls on the internet I can say these same things happen to a huge amount of players and DMs. That’s because by not being in your player character’s perspective your imagination is limited by what you see. You can always buy structures or build them yourself, but their costs are extremely high and take a huge amount of space in your house.

TotM gives you so much liberty you can make things appear

In contrast to what I was previously saying, Theatre of the Mind works in a very different way. Its only limit is your imagination and the DM’s descriptions of the place your character is in. In addition, players have a huge amount of liberties when using this method. When using a grid, you have to draw the interior of the temple the players are fighting in, as best as you can. However, if a player asks you when playing with Theatre of the Mind “Is there a column around here that seems weak enough for me to collapse?”, you can easily say there is one, even though that idea might not have crossed your mind, nor have you described it when they entered the place. But it makes sense for a column to be in a place like this, so why not? Take that same scenario to grid-based combat, and had you forgotten to draw a column that same idea might never have been thought out by the player, or would at least be less probable, as the column cannot be seen in the map.

So far, the only negative thing we have talked about Theatre of the Mind is the fact that it is difficult to measure distances when everyone is imagining its own version of the same thing. There is a solution to this, as I’ve seen many DMs and different Roleplaying games do: The Circles method (I don’t know what its real name is, but I like calling it this way). You make three circles, each of them inside the other, and position your player’s and enemies’ tokens or minis depending on how close they are in reference to a specific thing. Generally, as players tend to (or at least should) go together, they should be in the smallest circle, right in the middle. Each of the different circles, or “ranges” take 30ft to reach (or your full movement if you move more or less than 30ft, as this is an abstraction of the real distance). At the start of each of your player’s turns, recap each of the enemies’ and allies’ positions as well as any other important thing that might be taking place or the player taking the turn might consider important, and let their imaginations flow. 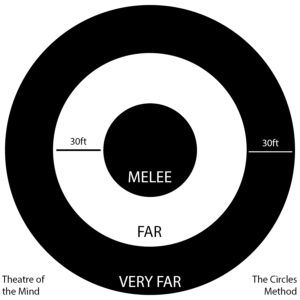 Another problem the players start encountering more towards high-level play is that lots of enemies can fly or at least hover some feet in the air. As I said before, this is very difficult to show in a grid if you don’t have the necessary equipment nor you want to buy it, like this stuff. To solve this inconvenience, what I usually do is place a die next to the creature (normally a d12 as they aren’t used very often) with the number of feet it is in the air divided by 5. For example, if a beholder is hovering 30 ft in the air, you can place the d12 with a 6 on top, which means it is 6×5 ft = 30ft in the air.

Leaving the drawn map in Grid

You want this combat to be exciting for the players and got a complex map in mind that is pretty difficult to describe by playing using TotM? You can draw it before the session starts. By the time the players reach the place on the map, you can show your prebuilt complex map and rejoice in their awe. Another good use is for when for some reason the map you took the time to draw will be used again in next week’s session. You can leave it like that and you won’t have to take the time to redraw it (which also might end up different than the one from the week before if you forget to add something). 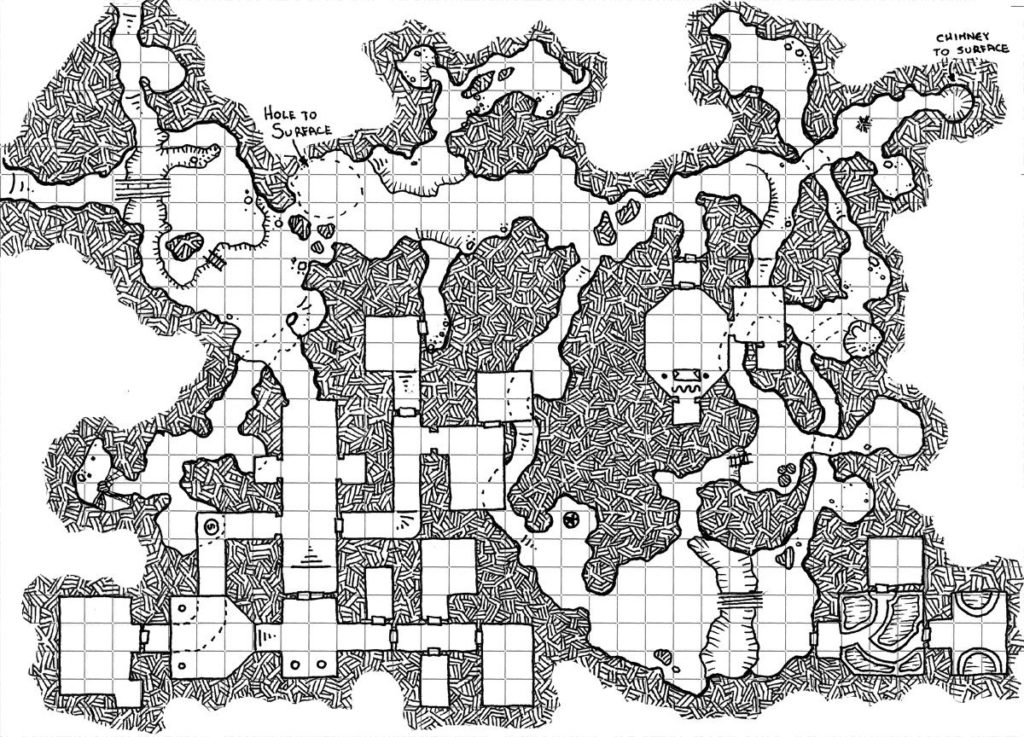 Players vs DM interpretation of TotM

Now comes the biggest problem when using TotM: interpretation. This is what has been making me take a step away from this method the most, as it can create trouble at your game if not described the scenario in a good enough way. Suppose you describe the scenario one of the players is in and that one (let’s name him George) doesn’t fully understand a specific detail, interprets it in a different way, or you as a DM forget to mention it. George takes his turn, which puts him at a disadvantage towards an enemy without noticing. Now you’ve got an angered player and a situation to solve as it wasn’t really George’s fault. This is where grids show their true colors as you can’t be more exact than that way when showing players’ and enemies positionings.

TotM is free, but there are inexpensive options for grids

Last but not least, playing with TotM means you won’t have to go look for a grid to play, meaning you won’t have to spend money on that, nor in minis if you want. As I’ve said in this post, there are cheap options for grids that are very good looking.

No matter which method you like the most, both of them have their ups and downs. I personally prefer grid-based encounters as I tend to forget to say details all the time, but TotM is totally my go-to for cinematic or quick encounters. So, to sum up, pick whichever you like the most for the situation you have at hand and don’t feel limited to only one of the two styles of play. Plus, if you love to collect and paint minis as I do, your players won’t get to appreciate them as much if you don’t put them in front of them as an enemy in a grid.

What’s your preferred style of play and why? If both, how do you apply each method?

Got some friends to play D&D with but they can’t decide what their classes and/or races for their characters should be? Or are you the player in that same possition? Click over here for quick classes and subclasses descriptions or here for quick races and subraces ones. This way, you won’t have to read the full books to have an idea for what to choose.

What Dungeon Designers can learn from “Bomb ...