Brief description of Races & Subraces (Ideal to Show to your Players) 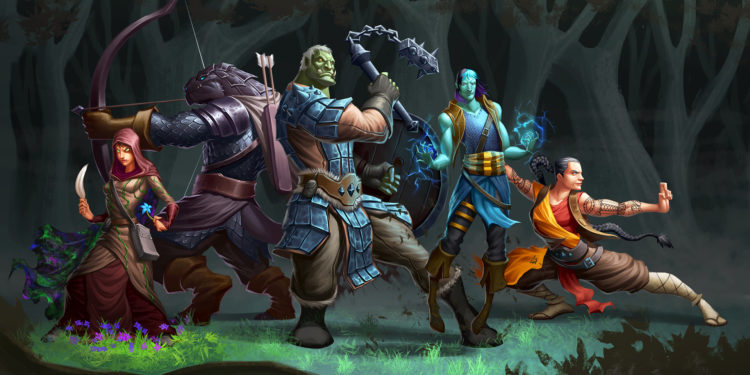 You’ve just got your class and subclass decided after taking a look at my previous posts BRIEF DESCRIPTION OF CLASSES AND SUBCLASSES, now it’s about time you choose a race for your game!

Most of these classes have these descriptions only when found in the Forgotten Realms Setting (Or whichever setting I specify). Take into account that their attitudes, places to be found, etc. may vary if played in a homebrew or different setting than the one listed here. However, the races tend to act or think in a similar manner, such as elves and their love connection to nature, or dwarves and their love to build stuff. I hope this can give you a general idea of which race you want to play.

Play a race because you like it, and alter it as much as you like and your DM allows it. Don’t be scared to try something different. Do you want to play a barbarian elf? That seems weird, but you can surely come up with a good enough reason for your character to have decided that path.

Without further ado, here are the official D&D 5e races:

Descendants of dragons, these draconic humanoids live in clans who they value more than their life itself. Depending on their color, they get a breath attack of a specific type, as well as resistance to that same type of damage in combat. They tend to be as strong as they are charismatic, just like their fellow ancestors. Even though they are covered in scales, they lack the tail and wings that make dragons so characteristic.

A Guide to Roleplaying Dragonborn >

Stout, short and hardworking. Those might be the best words to describe a dwarf. Having their race forged by the god Moradin, they were taught of the benefits of hard labor, perfection in their works, and the importance of their clans. Dwarves live their long lives with a spirit of good and justice, that may only be corrupted by greed. Their sturdiness allows them to be more resistant than other classes in combat as well as resist poison. They tend to vary depending of the place they are from:

Wiser than their mountain siblings, they also tend to be even more sturdy than them, meaning they are able to stand more hits before falling in combat.

The mountain and the labor in there has made them stronger. Their skin tends to be lighter toned as well as their stature a bit higher.

Greatly altered by the mind flayers, duergar distance themselves from typical dwarves in their traditions. They value hard work over any other thing. Due to their mental modifications, they are able to use certain psionic powers.

A Guide to Roleplaying Dwarves >

Elves are magical and gracious beings, as well as very close to being eternal. They develop many different attitudes during their life. When young (young being up to 100 years old) they have an adventurous and curious way of thought, making them go for adventures. By the time they reach adulthood their personalities change and become much more peaceful, but don’t discard the idea of going exploring until they become elders. They make for excellent artists and tend to be quite chaotic when it comes to laws. Last but not least, they don’t sleep but enter trances for 4 hours a day in which they remain semiconscious. If you are playing an elf, choose between the following subraces:

Eladrin are beings from the Feywild that look closer to how Corellon wanted the elves to look like. They can alter their looks in the same way seasons do. Depending on which season they choose, their abilities will be altered.

High elves are more studious and value art in a greater way than the other subraces. In addition, they master both longswords and shortswords, as well as shortbows and longbows.

Sea elves come from the sea and have big communities in there. They are able to breath both air and water, and can communicate with sea creatures in a similar way Aquaman does.

Shadar-kai are elves from the Shadowfell. They normally lack emotions and try to embrace strong emotions to stay alive, such as pain. Moreover, they can teleport up to 30ft becoming resistance to any damage until the end of the next turn.

Their intuition and keen senses are found to be the best among all elves, as well as their speed. Their training with weapons is similar to their high elves siblings, making them proficient in the use of longswords, shortswords, shortbows and longbows.

Drows were banished from the surface world for betraying Corellon, the elven god. That developed a hate from them towards the other elves. However, a very low number are indifferent about the quarrel and decide to go back to the surface in search for adventure. They are normally very charismatic and can master drow magic.

A Guide to Roleplaying Elves >

Gnomes are weird super positive beings. Their spirits shine even in the darkest nights. Great inventors, pranksters, and even better intellectuals. Living away from other communities they tend to live pretty normal lives in their about 500 years. However, just like halflings, curiosity is something that every one of them carries, as well as their impulsive behavior, creating excellent and many adventurers out of them.

They stealthily move through the forest, creating illusions to trick whoever gets close. Their affinity with animals let them communicate simple ideas to these beasts.

Rock gnomes are known as the best tinkerers. These hardy beings can create little gadgets or things with a specific purpose, to be used for commodity or to maybe get them out of trouble.

Gnomes of this kind aren’t frequently seen in the surface world, and even if they were there, their ability to easily camouflage with rocks would make them invisible at sight.

A Guide to Roleplaying Gnomes >

These beings combine the best parts of elves and humans, or so they say. They don’t really belong in either of both worlds, having to decide the community they find themselves more identified with. That’s the reason why they work excellently as ambassadors or wander off feeling excluded from all places, sometimes in the search for weird adventurers with whom they can find a sense of belonging.

A Guide to Roleplaying Half-Elves >

Halflings are isolated, cheerful people who love the commodity of their homes and communities. That’s the main reason most of them don’t abandon their birthplaces (shires). However, a strong sense of curiosity inhabits in most of them, leading these little folk to become adventurers or travel to other places. They are extremely agile, but as a result of their short legs, not as fast as the other races

These halflings can easily hide behind anything that is higher than themselves and tend to be more charismatic than the rest from their race.

Stout halflings have are similar in a certain way to dwarves. They are stout as their name says and have a resistance to poison.

A Guide to Roleplaying Halflings >

Half orcs have orc blood running through their veins. This makes them much stronger than normal people, as well as hardy. However, that also can make them act impulsively and savagely. They often live, or at least used to in orc tribes and may or may not feel the rage of Gruumsh within them (Gruumsh being the orc god). While many of them triumph as leaders in their tribe due to their high IQ in comparison with the others, others are exiled and go in search of jobs in communities or go adventuring. Their high endurance makes them almost impossible to fall in combat.

A Guide to Roleplaying Half-Orcs >

Well… I suppose you are a human, so you should know what we are good at. Absolutely nothing! Or more precisely, a bit in everything. Humans are quite more anxious and eager to adventure than the other races due to their short lives (in comparison with the others).

Ok, so you actually wanted to be a human that is good at a specific thing? Variant humans get to be a little better at something, while also getting a Feat at lvl1. They aren’t any different from the other humans in appearance or attitude, this is just a stats thing.

A Guide to Roleplaying Humans >

Tieflings take lots of forms and colors. They can have different kinds of horns and tails, as well as be from a great variety of colors. Nevertheless, they share some kind of curse. These are beings of infernal lineage due to a pact that someone in the long past made with Asmodeus (lord of Hell). They look mostly human, not taking into account the features described above. Even though they are mostly intellectual and highly charismatic beings, they tend to be received with mistrust by superstitious people.

The tiefling mentioned above are all connected to Asmodeus. In case you want your tiefling to be connected to another Lord of the 9 Hells, you can choose between these variants:

Tieflings connected to this lord can corrupt others both physically and psychically. Diseases and madness come from all who dare to confront them.

These people are searchers of secrets, as well as great spies and infiltrators. No truth can be hidden from them.

With their forceful personality, these tieflings act as great manipulators, filled with charm.

Great at illusions and thievery, as well as excellent at escapes and heists.

Tieflings whose connection is with the ruler from the Frozen Stygia are great both at combat and escape.

These beings are excellent both at gathering and safeguarding wealth, due to their greed.

Great with the arcane arts and the power that comes from wielding them.

Stronger than the other tieflings, believers in strength to rule it all.

Feral tieflings are a variant from the typical one (the one connected with Asmodeus) but do receive different spells and abilities. These range from spells such as Charm Person or Burning Hands, to have the ability to be winged and fly.

A Guide to Roleplaying Tieflings >