What Dungeon Designers can learn from “Bomb Chicken” 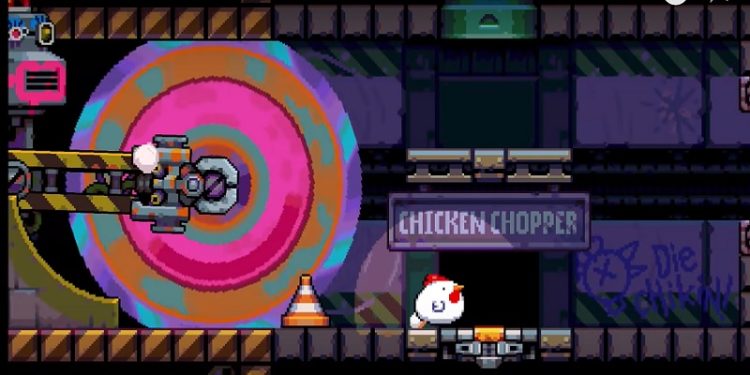 (Author’s note: this article is going to be somewhat different than my normal articles, being both gameplay review and interesting design features that GMs / dungeon designers can use in their games. To be fair, I did not actually play the game, but watched a walkthrough of gameplay. Also, Beware of Spoilers. You have been warned!)

Bomb Chicken is a Nitrome game on the Nintendo Switch last year. Its eponymous character, is a fat, bomb-laying chicken that was hatched in a fast food joint called BFC, presumably meaning “Blue (or perhaps Best) Fried Chicken,” likely a tongue-in-cheek reference to the real-world fast food giant KFC. BFC is a corporation that is manned by mindless drones who all seem to love eating said chicken, presumably because of the blue goo they’re fed.

The gameplay is something like a twist on classic 2D platformers such as Super Mario Bros combined with the Bomber Man mechanic. Instead of dropping bombs in front of the character as in the Bomber Man game, the chicken lays bombs instead of eggs, stacking them one on top of another to reach places it could not ordinarily reach, as the chicken can’t fly. The chicken can also push her bombs in order to open sealed passages and defeat enemies. Similar to Super Mario Bros, most enemies can be defeated by jumping down on them and which propels her into the air, though some of them are invulnerable to all attacks. Furthermore, some enemies respawn at an alarming rate, so care has to be taken when dealing with them, as one hit from any enemy or trap causes the chicken to lose a life. When she dies, her existence ends with a satisfying “pop.” Between sections of gameplay there’s an area with a giant chicken idol that allows your lives to be increased by one by trading the blue gems you collect (presumably the solidified essence of the blue liquid the chickens are fed). Each time you get a new life, the number of gems it asks for increases.

The game’s opening screen (after the screen telling you that Nitrome programmed the game) shows chickens wandering around a mezzo American style pyramid and workers eating (presumably) fried chicken. Once you hit “new game” the opening scene has a drone taking an armful of eggs to a room with an armful of boxes containing eggs. One of the eggs falls on an idol, which drips blue goo onto it, causing the egg to grow and hatch full-grown with the ability to lay bombs.

Just like Super Mario Bros, there are lots of tubes to travel through throughout the game, as well as collapsing platforms that can hold your character’s weight for a time before collapsing and resetting. Throughout the game, there are door operating switches. Some of these switches if pressed, will allow an area to remain open indefinitely. Others will only hold the door open for a set period of time, so you have to place a bomb on it in order to get through the area. There’s also spikes, arrow traps, and, in the final part of the game, the blue goo that empowered you to begin with will kill you by forming spikes. There are a few lava levels with levitating lava balls just like the Super Mario games too. Just like Bomber Man there’s lots of bricks to blow up. If you do so in the proper order, you can avoid dying. There are a few areas that are reminiscent of old school RPGs that limited your sight, so you can’t see the entire screen at once. The game’s first real “boss” is essentially a giant puzzle where you have to outrace a saw that’s chasing you, so you have to activate switches quickly before it can catch up to you, similar to the famous “escape the giant rolling boulder” scene in Indiana Jones and the Temple of Doom.

There are several types of enemies in the game. The first are the mindless drones that wander the area, which are easily dispatched by jumping onto them. Then there are pygmies that grow out of the ground, replicating rapidly once they’re dispatched by bombs or by jumping onto them. They’re also spear wielding savages that charge to the end of the area where they’re confined to if not killed. There are a few varieties of bats: one a standard purple bat that are encountered constantly flying, as well an upgraded version that is stationary until your character. There are a few types of plants. The first is a stationary spiky plant that shoots up a stream of projectiles. Think of these as the piranha plants in Super Mario.  Then there’s these slimes with a spiky top to them which bounce around the levels, which later on become fully enclosed, making it almost impossible to defeat them, but a perfectly timed bomb can do so. The second boss is a giant one of these such creatures, but instead of bouncing, it has legs. In order to attack, it spins and throws things out of its eye socket at you. There are floating skull-ghosts that can be dispatched momentarily, but soon reform to be able to attack again. Finally, there are these floating masks that can only be stunned, not killed. The final boss is a giant chicken sitting in a pool of lava, obviously the source of the blue goo that’s been fed to the chickens for the restaurant.

The one thing that I liked about the game is that in its simplicity, it allowed its character to do what it needed to do. Want to kill that monster? Bomb it or hop onto it. Need to get to that ledge? Build a pile of bombs and hop in. Need that door destroyed? Make a pile of bombs and push it to the door. Need to get to that inaccessible gem? Wait a few seconds and bounce the bombs off of bumpers in the level. Need to keep weight on a switch? Place a bomb on it. Need to open a chest? Bomb it. Even the mechanic of gaining more lives at the chicken idols was based around putting a bomb into the base in order to sell the gems you’ve acquired.

What does that teach dungeon designers? That they need to think about more simplistic solutions to their problems. Think about the following things when designing a dungeon.

I hope you enjoyed this review and idea mining of the Bomb Chicken game. Maybe next time you’re designing a dungeon you can use these ideas to make your dungeon more coherent, simpler, challenging and organic.