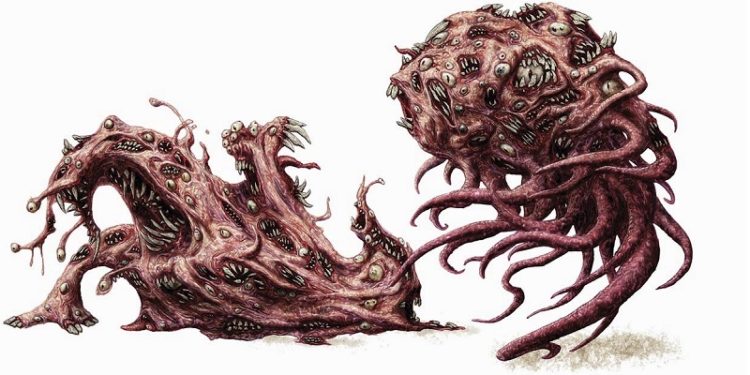 (note: when reading this article, the advice herein applies equally to oozes, jellies, in addition to the titular slimes, though I won’t always call it out in the article, so as not to be repetitious.)

When most people hear the words “slime” in the context of a RPG game, they feel that these enemies, for the most part, are beneath their notice. Yet these creatures, for all their similarities and simplicity, are awesome if they are used properly and can be used to challenge even the most powerful of characters.
Slimes, oozes, and jellies – and even such things as gibbering mouthers, mudmen, and mimics – are amorphous due to their unique lack of anatomy, these creatures range from mindless eating machines to tricky shape-shifters or something in- between, depending on their exact type. Their creation stories can be varied: everything from a psychic phenomenon from emotions coalescing into the ooze in the case of the Emotion Ooze to natural phenomenon dating back to the creation of the universe to horrors from another universe to a scientific experiment or magical experiment gone awry to a miscast spell (as in the case of the mustard ooze). They can serve the roles of everything from distraction to dungeon cleanup to deadly enemies to assassins. Among the reasons these enemies are omnipresent in games is because of their versatility. 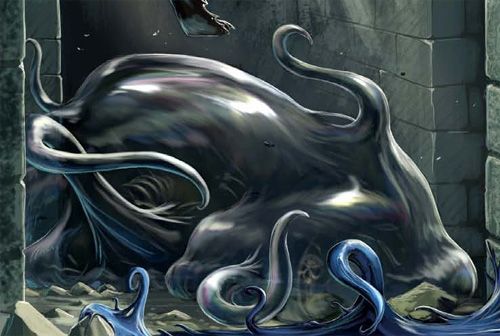 Generally speaking, slimes, oozes, and jellies have the following traits:
(Note: these traits are based on D&D/ Pathfinder. Individual rules for your specific system may vary)
Amorphous: Slimes, oozes and jellies lack discernible features, allowing them to “flatten” themselves out to get into the tiniest of places. This makes them similar to the real world cephalopods and hagfish.
Mindless: immune to all mind-affecting effects (charms, compulsions, illusions, phantasms, patterns, and moral effects). Even ones with rudimentary intelligence may be highly resistant to such.
Blind (but have the blindsight special quality), with immunity to gaze attacks, visual effects, illusions, and other attack forms that rely on sight.
Immunities: poison, sleep effects, paralysis, polymorph, stunning, flanking, precision-based and critical attacks. Some may be immune to piercing and slashing weapons, as well as damage based in some elemental damage.
Vulnerabilities: Depending on the specific variety, though if they are immune to one type of elemental damage, they’re usually vulnerable to its opposite. For instance, some oozes may be infused with negative energies, thus making them vulnerable to positive energy based attacks.
Special Damage: Many slimes, etc. have the ability to deal acid damage to objects.
Skills: Many Slimes are quite observant, having ranks in perception, climb, and are quite proficient in using their bodies to slam or en.
Weapon / Armor Proficiencies: Natural weapons (slam attack, engulfing attack), no armor.
Slimes, oozes, and Jellies eat and breathe, but do not sleep. 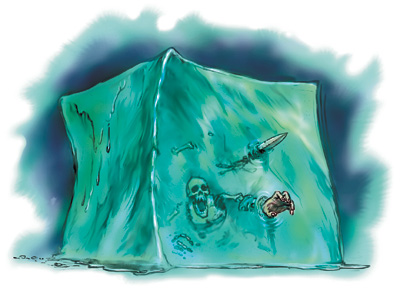 Due to their multitudes of creation myths, there are a variety of ways to challenge your players/ NPCs. Note, not all of these ideas / abilities may be  from D&D/ Pathfinder. 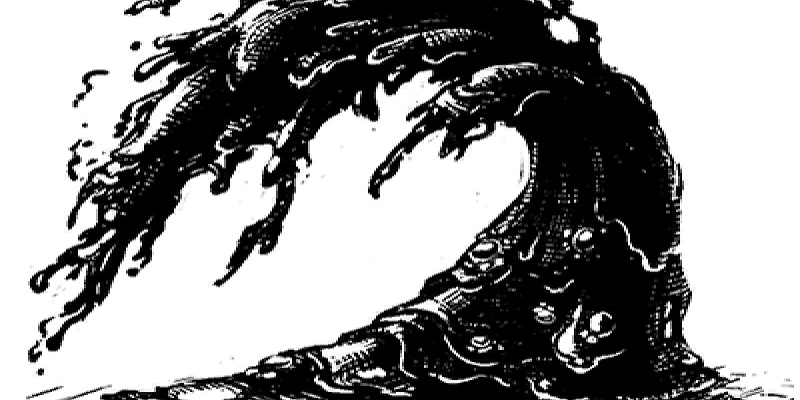 I hope these ideas on how to make slimes a more integral part of your game were interesting and useful.