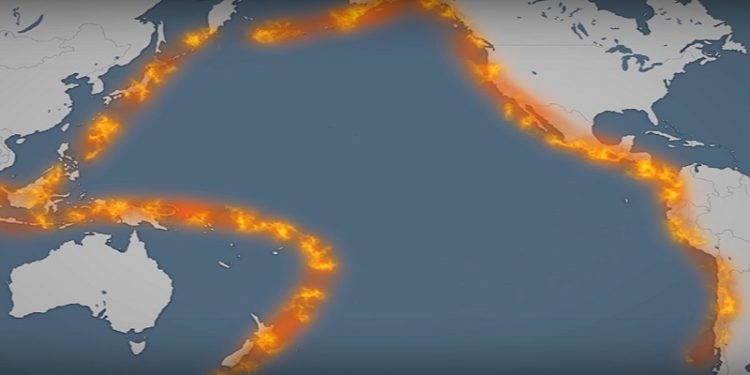 (A/N the picture for this article is the Ring of Fire. All the red marks on the map represent volcanic and/ or earthquake activity.)

In real life, the Ring of fire is a major area in the basin of the Pacific Ocean where tectonic activity such as earthquakes and volcanic eruptions occur due to the intersection of several plates.  However, it’s a good starting point for a campaign idea. Read on:

This idea is a thought experiment that has 6 goals 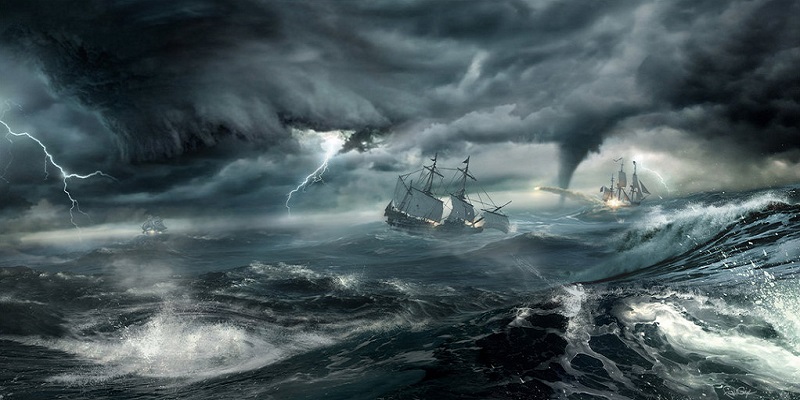 The setting is the Ring of Fire in the Pacific Ocean from Japan’s latitude, about 37 degrees north to about 37 degrees south of the equator. Further west of Japan is an area known as The Endless Dark, an unmapped and dangerous expanse of waters that is constantly shrouded in darkness (more about this later). In this setting, neither the Eurasia continent nor Africa exist. If one were to continue north of the 37th parallel, the waters would quickly become colder and impassible with ice. The air is so cold, it also forces any flying mechanisms or creatures to the ground. Continuing south past the 37th parallel south, the continent of Australia has been shattered due to a cataclysmic event and the remnants make up an impassable barrier known as “The Dragon’s Teeth” where the waters are so rough that no boat can pass. The area is also fog bound so that airships that enter get lost and eventually end up in this same area. The Pacific Ocean itself, unlike the real-world counterpart, is home to a great number of islands collectively known as “The Thousand,” though the actual number is unknown, as they appear and disappear with the tides. Also, due to the severe volcanic activity, an island can spring up from the ocean at any time (though unless it’s a dragon turtle [several of which are known in this setting]) it’ll take some time to cool and be populated with life. America exists, but beyond the mountains seems to be largely vast stretches of grasslands and impassable desert. South into Mexico and South America are known for their immense rainforests and swamps. 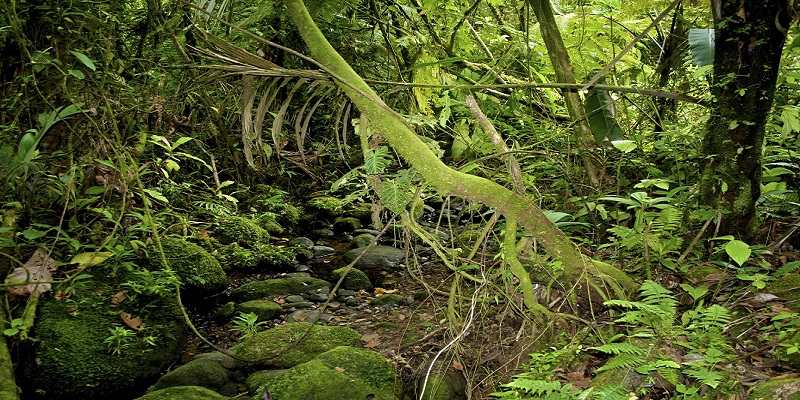 ‘In the beginning’ would be the start to most cosmologies. Unfortunately, the true beginnings of the world are so far in the distant past, that no one really knows how things started. It could have been a simple wish gone wrong (or right, as fate may have it). It could have been one of a nigh-infinite number of parallel dimensions. Or it could have been crazy powerful (and large) space dragons that brought it into existence. It could have been as a result of the gods designing it and dying off or being killed. Whatever the case, the world’s origin was lost to the annuls of time. All that is known is how things are now.

In this world there are no gods. Instead there are forces like the force of fusion activity that forms the sun or a black hole. Implacable. Undeniable. Unchangeable. While these forces have a rudimentary intelligence, it’s more akin to an instinct to have their “wills” fulfilled than anything personable, anything that the PCs can interact with, kill, or change the mind of. Also note, even though these forces are powerful, they are limited in the scope of what they can do. They are set up almost like a “paper-rock-scissors” game. The forces controlling everything are as follows: 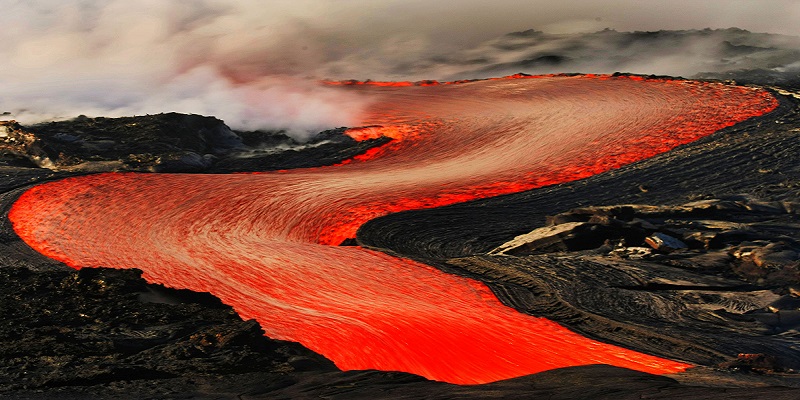 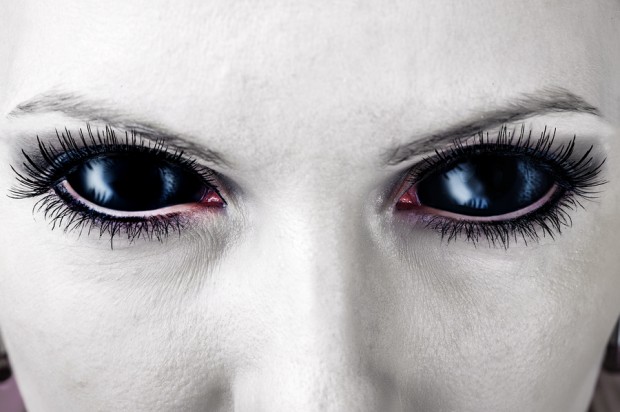 ^ It should be noted that The Storm provides the animation, though any of the other forces can provide the materials. For instance, you can have a golem made of stone (which would be made of the Lava’s/ Magma’s materials) or bone (the Endless Dark’s Materials)

Design notes: Due to the way the cosmology is set up currently, there is no afterlife at least the way that most people think of it. As such, there are no outsiders, there is no heaven or hell, no angels or demons. There are also no therianthropes (such as werewolves, wererats, etc.) in the setting, as it wouldn’t make sense with the cosmology, with the added fact that many of the races are bestial in nature.

As I wrote this, without thinking about the color scheme, I inadvertently produced the colors of Magic the Gathering, without the White (plains) color. If you wanted to as an alternate force, you could say that healing and protection could be based in the Infinite (or Limitless) Light. Maybe it exists, but not many people know about it, and it’s introduced as a plot point to discover what it is, how to access its power, and find out why people don’t know about it anymore. It could also be an easy way to introduce devas/ angels into the setting. 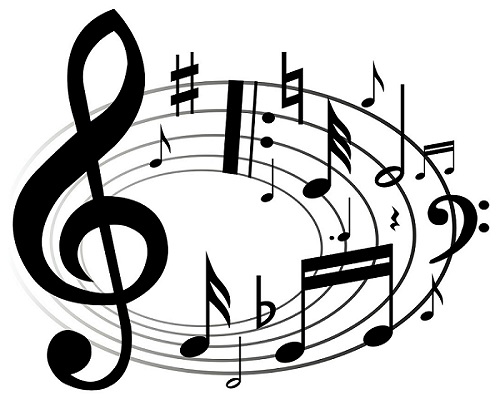 As was stated in the setup to this thought experiment, humans, elves, half-elves, half-orcs, halflings, and gnomes do not exist. This is to help the feel of the world be completely different from other settings out there. Having said that, it doesn’t mean that the world is lacking diversity. It may be even more diverse than a campaign based around these stock fantasy tropes.

Please note that there is going to be homebrew content in these links. Because this is a thought experiment done for fun, I am not all that concerned about balance, however you may be for your game(s). Before accepting anything for use in your campaign, make sure to read it and understand if it’s appropriate for your game.

Also note that while some of the creatures are typically played as evil, due to the different cosmology, they can be played as a blank slate.

The Japanese isles are home to a variety of unique creatures that can be used as player characters. Players have Oni mages , (homebrew) and kitsune (homebrew), pandafolk, hengeyokai, and Spirit Folk and Nezumi to choose from. This setting’s Japan’s culture is the honor-bound culture as seen in feudal Japan, complete with ninjas, and samurai, but mixed with some of philosophical ideology of China. 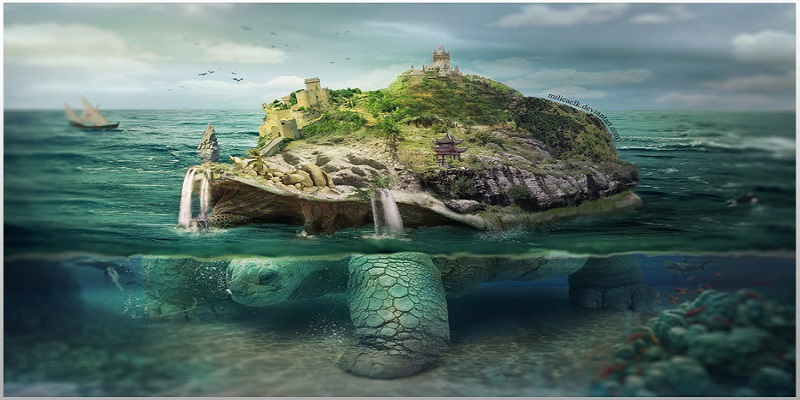 The Thousand islands are home to many people, among which are tribes of goblinoids, including bugbears many of which are barbarians fighting petty wars over a – though there are a few notable tribes that seek peaceful coexistence with others in the area. Then there are the wandering tribes of hobgoblins, and goblins that have become known for their piracy. It should be noted that a very few goblins have broken from their brethren and become civilized, but are usually are treated poorly and openly discriminated against, though there are some who have become well known for their inventiveness and machinery.

Then there are many dragonborn in The Thousand that make up much of the civilized peoples of the islands. Unlike many of the other races in the Ring of Fire, they have figured out how to get along, even with their traditional enemies – dragonborn of other ancestries. There are multiple examples of dragonborn with different ancestry and producing offspring with abilities of both parents, albeit at a weaker level. (From a game design aspect, Dragonborn would be the “Humans” of the Ring of Fire, being both the most peaceful, as well as the most numerous. The different subspecies could be akin to the different cultures present around the world.)

Mingled in with the dragonborn and few civilized goblins, there are the rare pantherfolk, and batfolk (both of which can be found here), as well as self-aware automatons+, and aarakocra  which serve as underpaid (or sometimes unpaid) help such as farm workers, cooks, maids/ butlers. They are also utilized as spies, assassins, and messengers. Because of these latter roles, they are viewed with suspicion, but due to their integration in society, aren’t openly discriminated against.

+ Note: even though these *are* called Warforged in other campaign settings doesn’t mean there was a war that they served in. Their history is simply connected to The Storm’s powers of animation, regardless of what materials they’re made of. 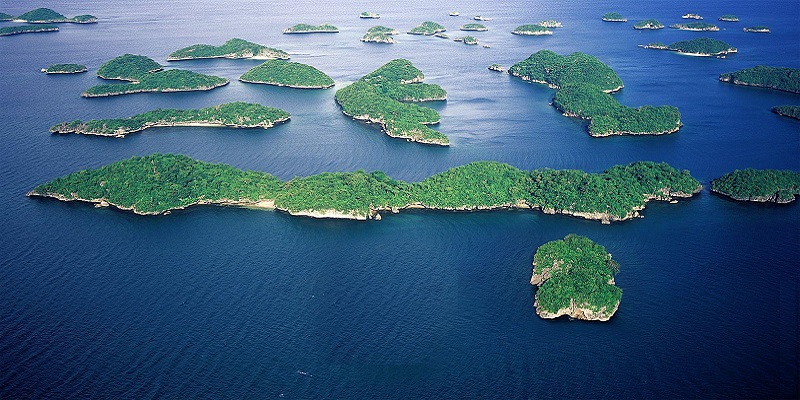 North America is home to Wolffolk / Wolfkin and Foxkin tribes (both of which can be found here) that live much the way Native Americans lived, subsisting off the land, following herds of buffalo. Over the mountains, in the American Southwest, there are horse riding Lizardmen herding cattle, and a few Minotaurs riding horses or riding lizards wandering the barren landscape.

Much of Mexico and South America are rainforest and have a society much like the Aztecs. There you will find Yuan-Ti Pureblood, and their guards. Sometimes they’ll work with the Tabaxi, and Bullywugs (homebrew) in the area.

Sometimes the forces will seek to get things done and in order to “push things along” they send a representative fully formed from nothingness as an extension of the force’s will, though the creature so formed will have memories, skills, abilities, as if it had lived as long as it thought. These representatives are the genasi, specifically the following types:

Note:  the force’s will communicated to them through their dreams and waking visions. While genasi do have “free will,” it’s very hard to escape the reason for which they were made. Because they come into existence fully formed for a specific mission or purpose, there are no genasi lands, and it’s rare (though not impossible) to find multiple genasi traveling together.

I hope this start to a campaign setting has given you some fuel for thought. Next time we visit this topic, we’ll discuss (among other things) the class changes, monsters and plots.

Sail the Seas with Ghosts of Saltmarsh ...