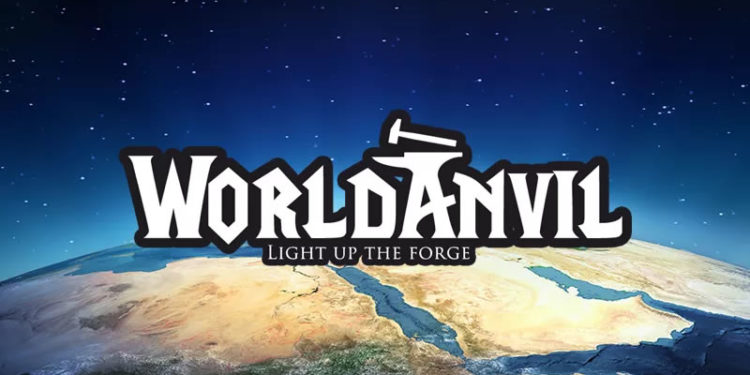 Many GMs around these parts are also dedicated world-builders, so today I’m looking into World Anvil, a browser-based world-building toolset. They’re advertising on Tribality, but I don’t believe that has affected what I want to say about them in this review.

The short version of what goes on here is that it’s a very dolled-up setting-and-campaign wiki. I’ve been storing and presenting tabletop campaigns in wikis since 2005 or so, though mostly the super minimalist PBWiki/PBWorks. This is the other kind, and I’m fascinated with the kinds of additional features it offers. To be clear, I’m using the free version; there are four paid options as well, with an increasing variety of features.

If you’ve used just about any kind of campaign wiki for your setting-building before, you probably know that a blank wiki page is even more daunting than a blank Word document, OneNote page, or blog post field. I don’t know why this is, but it’s certainly my experience. The thing I adore about World Anvil is that they seem to know this, and they’ve done two key things to address it.

The first is that all of your navigation options that let you create a new page show all the different kinds of page templates you could create. Templated wiki pages aren’t revolutionary in themselves, but displaying all of them together seems like it would work well to jog one’s imagination. Say you’ve been writing for awhile and you’ve knocked out six or seven good entries, but you don’t know what you want to write next. Each type of template has a name, an icon, and mouseover text that suggests what kinds of stuff might go in that template. The visual appeal here is solid.

The second part of their solution is the real power move. Each template page has a few separate text boxes to describe the topic, in addition to a general text box at the top. For example, just within the Building template, there are two tabs, Generic and Room. “Generic” has fields for Location Type, Alternative Name(s), Purpose (including a link to collected inspiration), Alterations, Architecture (also with a link to a video), History, Parent Location, Date That Became a Ruin, Ruler/Owner, and Owning Organization. “Room” has a different set of fields, prompting you to think more deeply about what you’re writing and make sure that you’re making everything as interesting as possible. To put that another way, they’ve paid attention to GMing and world-building best practices, and coded that into each template.

World Anvil also has system-specific handling for an enormous number of tabletop games. I haven’t explored much beyond 5e, but I can say that the templates for 5e content look thorough without becoming simply overwhelming.

There are two things that World Anvil doesn’t do that would make it a killer app for me. Both are firmly outside the mission statement of “a very tarted-up wiki.” Before I dug until this, the name “World Anvil” got my hopes up that I’d be looking at a fully-featured world-cartography toolset. This isn’t that – if there’s a drawing function at all, I haven’t found it yet. Instead, you can upload images (such as a scan of a hand-drawn map, as I’ve done) and tag them with location markers. Those location markers can link to all of the other content in your setting. Also, the paid tiers offer numerous improvements to map functionality.

Second, I’m one of those who is devastated by the demise of Google Plus – my campaign’s G+ Community was our primary medium for session scheduling. I’m looking into Obsidian Portal because I already have an account there, but event scheduling and all forms of calendar access are paid features there. It’s a tough value proposition when I only need one feature! In World Anvil, there’s a free scheduling function, but (from what I can find on a quick search) its only option is telling your players when the session is, rather than providing a space to discuss scheduling.

There are also a couple of things that I think I’m not understanding quite right – some pages that it seems like should be populated with content I’ve created, but are just showing their title and the ads (because, again, free version). I feel confident that I could make sense of this, with more digging than I’m going to do right now.

The free version of World Anvil looks very strong. The limit of two settings for the free version definitely stings, but I can hardly blame them for wanting to get paid. World Anvil also has tons of links to YouTube videos of world-building guidance – I’ve only scratched the surface there. The titles look promising, though the conversations take their time in getting to their topic.

I can’t say enough good about their templates. When was the last time I saw someone actually try to solve the problem of the blank page? They intrigue me enough to strongly consider entering more of my setting there, and looking to the prompts to get myself to do more development. I have had some trouble lately getting myself to do the work of maintaining and updating my campaign’s PBworks wiki.

I’ve glossed over a lot of nuance in the features, like how almost every template has a field for GM-facing secret notes, or the graceful handling of multiple interconnected timelines (such as the timeline of one city within the broader timeline of a realm, continent, or setting).

The one downside to the extraordinary depth and interconnection of the articles is just knowing where you want to begin. If one character connects to three other characters, two other locations, and one organization, and some fields don’t let you link anything you haven’t created yet, then you’re going to spend a lot of time going back and filling things in – and some things are going to get missed. At least, that’s been my experience with every professional or hobby wiki I’ve ever touched. (That doesn’t mean World Anvil is on the hook to solve it!)

In case I’ve left you with any doubt: I think the free version is a great product, and the paid options look like a real possibility. Set aside an afternoon to check it out! Now I want to carve out a bunch of extra time to work on my setting…