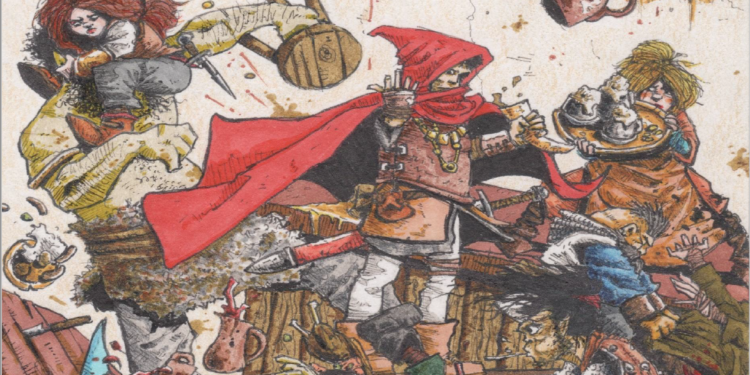 Having written two weeks ago how to make a simple ruling system for a Tavern Brawl encounter I first looked at this doubtedly. I didn’t think there could be a way to make it even simpler while also making it fair for the players. However, after I finished reading this my opinion flipped 180 degrees. Thus, here I’ll leave you with a full review that judges not only the mechanic per sé, but the entire supplement.

You can get the supplement for $3.95 by clicking here 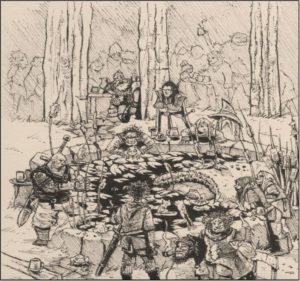 The supplement uses a specific way of drawing that looks pretty much like sketches or line art without any color. To get a rough idea of how it looks you can see this image I added. In my opinion, it really fits with the theme of the supplement without being invasive when reading. Moreover, it’s good enough for DMs to take a look at them and get a bit of inspiration on how to build the brawl.

The art and way everything is presented as a whole screams old-school D&D, and if you have some modules or Dungeon magazines from AD&D you can easily draw a direct line from where this supplement took inspiration for their art design.

The Tavern Brawl and mechanics

When I first glanced at the concept they were trying to sell me on how to manage the brawl as a DM the first thing that came to my mind was the Bar Brawl monster from the Creature Codex. However, I was impressed to find out that this supplement was in fact released before the Kobold Press’ monsters book. The thing these two supplements have in common is the way they easily manage the brawl: treating it as a single creature.

By having the entire Tavern Brawl be a “swarm” of people (it’s not actually managed as a swarm) you take a lot of the complexity away. You don’t need to track every individual person’s hit points, but the one of the group as a whole. Once the players decide to take part in the brawl, they enter some sort of minigame. Some separate and super simple rules are taught to the players so they can understand how the combat works, and you are ready to fight “Theatre of the Mind” style. 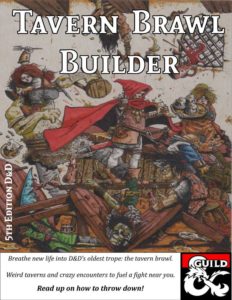 The ruling or mechanics of the brawl consist of making ability checks to hit someone with your fist, a close object or in some imaginative way you can think of. The amount of damage taken by the Brawl is always the same to keep the combat fast-paced, no matter your class. The only way to deal more damage is by casting spells, which may turn the whole brawl against you as it can be seen as a way of cheating during combat (left to DM’s discretion).

Succeeding in ability checks will grant you the chance to avoid getting hit or dealing a blow. Failing, however, means you will need to make a Constitution Saving Throw or be instantly KOed (you remain stable). You might think this is not fair, and that a barbarian should have a much better chance in combat than a wizard. I partly agree, as spellcasters should be the first ones to fall in these kinds of combats but aren’t as prone to due to their high Constitution score. On the other hand, the fact that they normally aren’t as good in Athletics and Acrobatics means that gets balanced out. This way, all players can have a fun time punching random people instead of staying by the side waiting for the others to finish.

The DCs all range between 8 and 12, being most of the times at 10. By having everyone know this, combat becomes fast-paced and fluid, creating that sort of sensation that everything is happening extremely fast. The simplicity ends up becoming a key factor that made me fall in love with this whole supplement.

Last but not least, if someone gets angry for having a character with 100+hp and being KOed by a single blow remind that person this is just a minigame and is made with the intention of everyone having fun and recreate these sort of scenarios as simple and close to reality as possible.

For the price of $3.95 I would be ok with them only giving me the rules I talked about before, but Jean Lorber and his group of creators decided to go an extra mile and create lots of inspiring items to throw or use as a weapon, taverns to place in your world, complications during combat and reasons to make a tavern brawl begin. These tables are listed in a way for you as a DM to roll in randomly to choose the perfect scenario for your game. All of them have really imaginative names and full descriptions to assist you when describing.

The tables section starts with a single page in which you can find the stats for a Normal difficulty Tavern Brawl and a Hard difficulty one. In that same page, by the side, are the random tables I just talked about. The weird thing about these tables is that they show imaginative names instead of dull names for the encounters. “Cuidado, piso mojado!“, and “Release the Crack-en!” are two names that just by reading them made me imagine of some kind of situation that would give them those names, only to find out that they are fledged out in the following pages. In consequence, I was able to decide if I liked better my idea or the one described by the supplement and use the one I like the most.

What I ended up liking the most were the taverns listed and described. Most are completely weird but in a way that would totally make sense in a fantasy world, such as taverns located inside big trees. As if this were not enough, each of them has its own special thing that distinguishes from the rest greatly. This same tree tavern I talked about before, for example, is full of critters running around inside it (like birds or squirrels) that may help you or make the brawl way more difficult.

Art10
Tavern Brawl Mechanics9
The tables10
9.7Overall Score
Even though there were some things I didn't agree should be the way they are in the Tavern Brawl mechanics, I can certainly say this supplement is an awesome purchase. I can't think of any way to differentiate the classes during combat while leaving it fast-paced, which is my only criticism about the product. But, if you think a bit about it, that's the reason this kind of combat is so fun to run! From the art direction to the tables at the end, this supplement is definitely something I will hang on to for all my future Tavern Brawl encounters.
Tags5th editionbrawlbuilderrulestavern
Previous Article