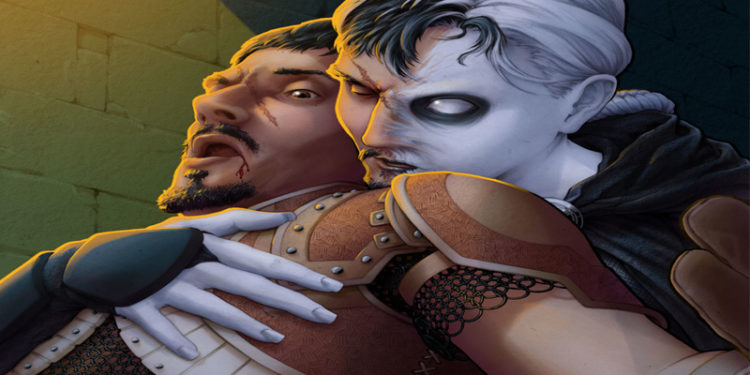 Changelings are masters of blending in. They are perfect for the roleplayer who has too many characters buzzing around in their minds to be able to choose just one (ie. me). They possess the ability to change shape at will to mimic any humanoid within the medium size class. With this and their natural boost to Charisma, you gain a veritable swiss army knife character for social encounters.

When it comes to roleplaying changelings, you have the challenge of creating a character whose basic physical traits, like gender, hair or eye color, and even voice, are subject to change on a whim. You will need to turn inward and really get under your changeling’s skin to create an inner life that is rich and full of delicious roleplaying potential (which I hear tastes like lasagna).

Changelings are defined by their connections. Who are they in their community? What is their relationship to the people around them?

Work with your DM to determine what role changelings play in the landscape of the world. Are they hidden among populations of humans, elves, and dwarves, or are they organized into clans or groups of nomads? Is a changeling’s identity kept secret, hidden behind layers of personas and masks? Or, do they openly display their abilities?

Take some time to think about who you are, specifically, to each of the other characters in your group and those you frequently interact with. Perhaps you always wear the persona ‘Agatha’, a middle-aged woman with brown hair and a scar on her cheek, when speaking with the cleric in honor of a priestess you once knew. Or, maybe you wear a dwarf mask when speaking with the dwarf barkeep just to keep him at ease?

It may be helpful to make a list of what masks, personas, and identities that you adopt so that you the player can keep them all straight. While the older version of changelings from UA had a mechanical benefit to creating specific personas to use when using a skill, you can still port in the flavor of that ability if your DM is disallowing UA. You can let these develop over the course of the campaign, or sketch out a few before starting play.

For example, a dwarf brewer teaches you the secret to making the best dwarven ale in one session. From now on your changeling adopts his face whenever you are brewing.

Consider how others might react to you using their identity like that. Do they consider it to be an honor or a horror? How do you feel about solids and their determination to cling to one “self” when you so obviously demonstrate that the self is nothing more than a construct?

A Changeling’s Relationship to their Identity

When roleplaying a changeling, consider how you would use your abilities to express yourself. You may adopt a feature that is shared across all the masks and personas you wear, like a lock of silver hair, or eyes that are a certain shade of green.

What about you is more fixed and stable? Do you always drink the same kind of ale at the tavern, or you never deviate from your morning routine of sharpening your blades?

For changelings, perhaps more than other races, who they are is defined by their deeds and their relationships. Cultivate these and take some time to really get into your character’s skin and consider how they would feel about each party member and what they hold important.

Why do they travel? Simple wanderlust may be a good starting point for a changeling character, but at some point choosing a specific reason to become an adventurer can help give you more clarity when it comes to making tough decisions.

Fluidity in Name and Personhood

Changelings are able to easily adapt to the culture that surrounds them, blending in seamlessly. But that does not mean that they do not have a culture of their own.

One source of inspiration you might draw from is Ursula K. Le Guin’s The Left Hand of Darkness. It’s a fantastic science fiction story set on a planet where the people there are only male or female at certain times of the month and then return to an androgynous state.

You may be both mother and father to children. Gender roles in changeling society may not exist, however, there is room for characters who prefer to shift to display one gender over another.

Gender in humans is largely performative, with each culture having its own standards to define categories of gender. In western culture, gender is often seen as a binary, male and female. However, it really is something more of a spectrum in practice. People exist all over the female-male continuum and their gender may move on that continuum over time.

I want to make a distinction here that I am discussing gender and not biological sex. The two are not the same and if you want to learn more about why here’s a great video.

As a changeling, you may have an even finer distinction of gender expression. Perhaps you have very specific hairstyles, clothing, makeup, or even weapons that you use when you are in a persona of a certain gender.

It wouldn’t be unreasonable to say that perhaps changelings have five or more genders, based on where on a gender spectrum they fall.

And try to divorce your thinking from modern gender norms. For example, it was rather typical for men to wear makeup and heels a couple of hundred years ago in the west, and facial hair was considered barbaric. Then that all changed with the following generations.

My point is, we’re playing a game set in a fantasy world full of dragons and magic. Why not explore the wide range that humans express themselves through gender instead of insisting on a rigid binary ported from the real world?

Questions for your Changeling Backstory

Art credit to Wizards of the Coast.

A Guide to Roleplaying Goliaths