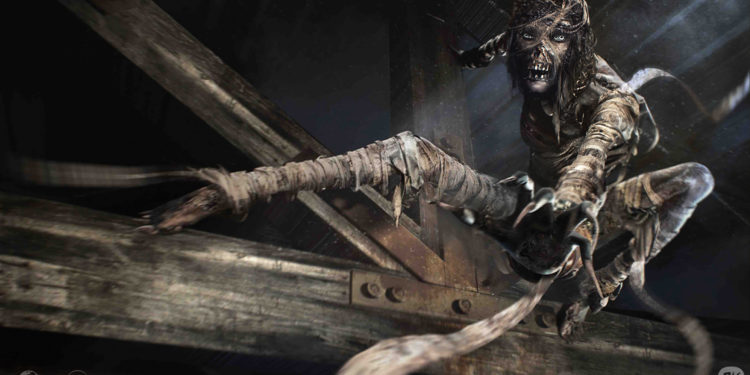 After being asked to do a Mummy Lord lair in the same way I did with the Aboleth by Christopher McFarland I immediately went look for different things I could do with that monster. The name of the monster alone just gives me The Mummy and Indiana Jones‘ vibes, so I wanted to add a bit of those to the mix.

I ended up loving how the first Lair article resulted and I may turn this into a series of articles, so stay tuned for more! (and recommend me monsters you would like to see!). Without further ado… Let’s begin!

Quick note: When I mention The Mummy movie I am referring to the original one from 1999, not the Dark Universe one (that one sucked). 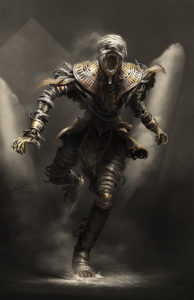 I adore the Mummy Lord concept. The image it gives by just thinking of it is awesome. However, when I went looking at the monster statistics I ended up rather disappointed. This monster is quite dumb (only 11 Int?) compared with other masterminds such as the Aboleth, and its amount of hit points are really puny in comparison with other monsters of CR 15. If a party were to gang up against it, it would not last longer than a turn of battle. It might be immune against non-magical attacks, but let’s face it… If by the time your players reach the possibility of fighting a Mummy Lord they still haven’t got at least a +1 weapon, then they have failed as adventurers.

So, in order to make the Mummy Lord stand out, we will need to do some slight alterations, such as adding a spell from Xanathar’s Guide to Everything (not extremely necessary, but it does add some juice to the mummy), as well as giving a reason why it should present a tough battle.

A Mummy Lord is nothing without its temple/pyramid. These constructions are made in order to protect the deceased person’s corpse and treasures from tomb raiders and dumb adventurers. Therefore, we should make it difficult for them to reach the cache and (of course) the residing boss in there resting in its sarcophagus.

Both the DMG and XGE do provide a huge number of traps for you to steal and/or use. There are also tons of videogames, films, and books to take inspiration from when creating these. Don’t be scared to use the classic ones. Just try to give them a twist whenever possible. Why not make the cliché rolling stone ball make the players run deeper into the dungeon instead of out of it? Spiked walls slowly trapping the characters, spinning or pending blades and poisoned arrows coming out from small wall orifices are must-haves for example.

You need to have at least one complex trap in there. How else would the characters prove worthy of Tutankhamon’s treasures? Here I will show you a sample complex trap I made up on the spot you can steal as an encounter for this pyramid. I recommend making your players take their turns fast so they don’t have that much time in between turns to guess how to solve the puzzle.

The players enter a room from which there is no apparent exit. 18 tall mirrors stand positioned in a diagonal way, with a Jackal’s head on the top of each of them. From the way they are constructed, it seems as if all mirrors could be rotated 90 degrees at a time (no more, no less). It takes a DC14 Strength (Athletics) check to rotate them. Two golden boxes are located one at each end of the room. As soon as the box located on the west most side is touched, a 15-foot deep sandstone wall falls blocking the entry, all Jackal heads open their mouths and poisonous gas starts coming out from them. All mirrors and Jackal heads are imbued magically to reform when broken in the next turn, the golden boxes are glued with Sovereign Glue to the pillars they are located on and a laser comes out from the westmost box pointing to the mirror in its east side. Those who go through the laser must make a DC12 Dexterity Saving Throw or receive 1d10 lightning damage. Everyone roll for initiative. 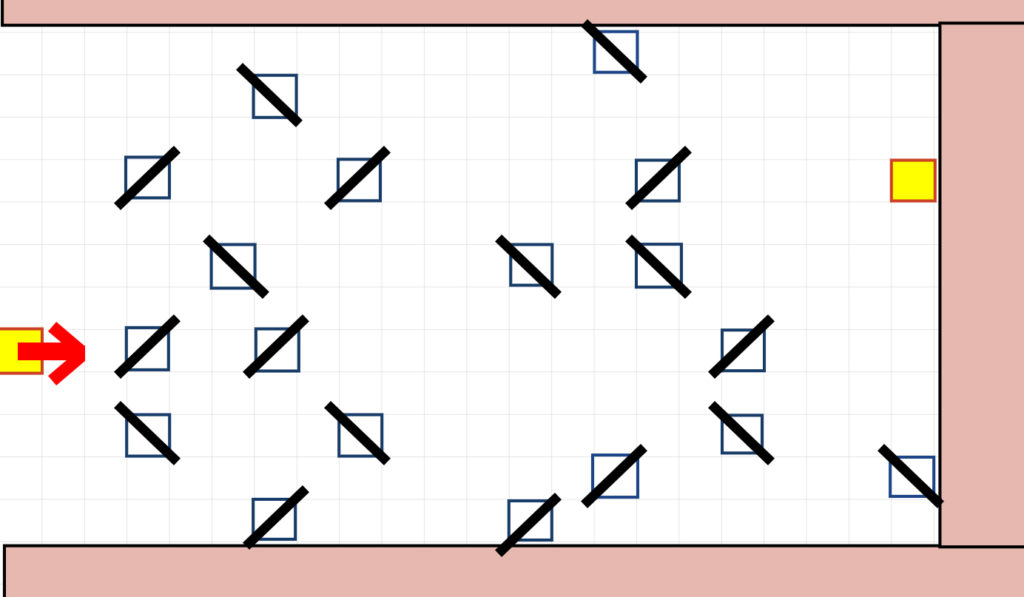 In order to solve the puzzle, the laser needs to reach the other yellow box reflecting through several mirrors. After this, all poison dissipates, Mummies turn to dust, and a secret door opens to continue ahead. 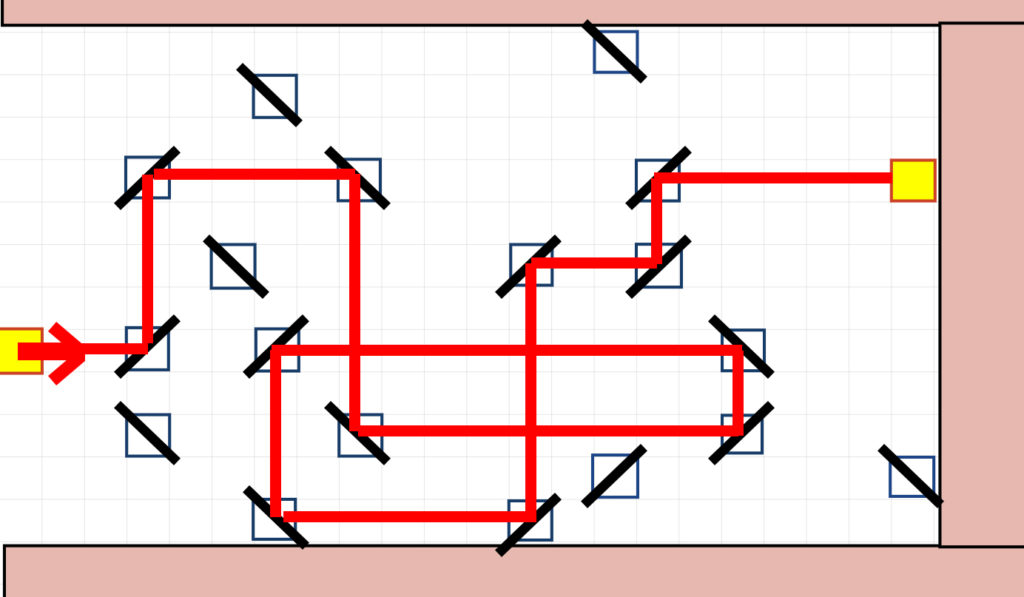 As if everything else was not enough, the Mummy Lord needs to test if the characters’ wit is as good as their ability to survive. Have a room with a Ginosphinx as a miniboss. As long as the PCs solve its riddle, it will not tear them to pieces. Feel free to use this rifle I invented:

“Who is that who kills all they touch, burns worse that holy fire, can never stand in the shadows, yet spies the living at most times?”

If the players do present another possible alternative then let them continue. Riddles may have lots of solutions and you should not punish them if they do come up with another valid option that isn’t the one you know as the answer. 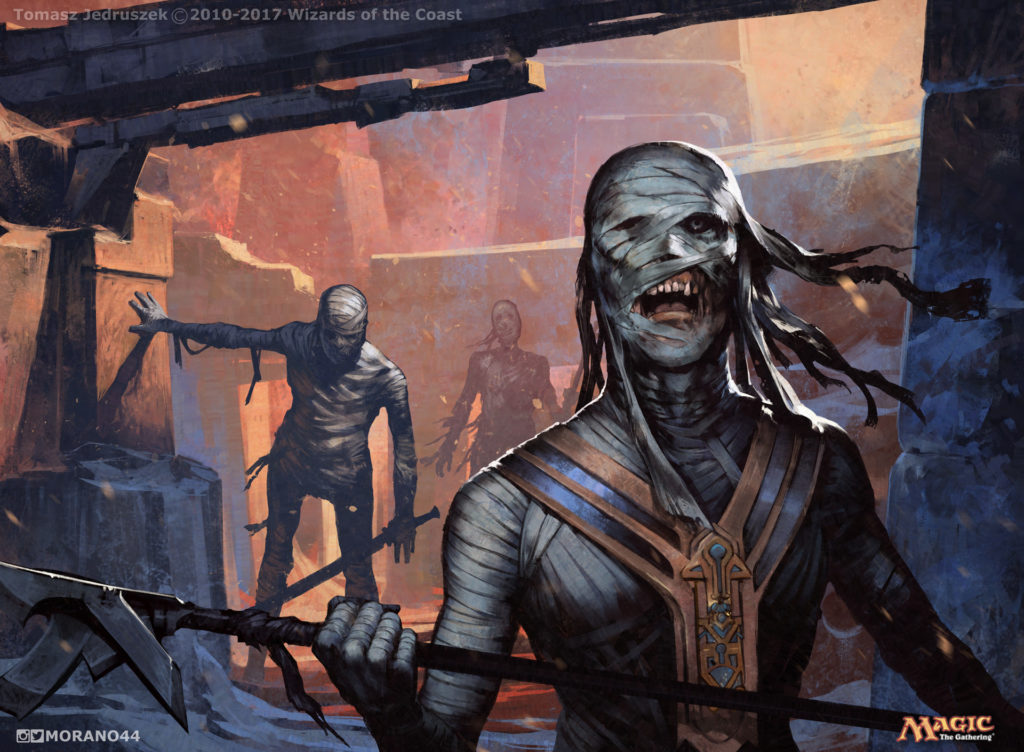 Add the Negative Energy Flood (which creates Mummies instead of Zombies if it manages to kill a character) and Abi-Dalzim’s Horrid Wilting (only able to use it once) to the Mummy Lord’s prepared spell list. In addition, let’s bump those hp to the max possible for a longer, more intense combat (13*8+39=143).

The heart and the treasure

These two things should, in my opinion, be in a room after going through where the Mummy Lord resides. I would hide the heart in some little wooden chest a la Davy Jones from Pirates of the Caribbean. If the Mummy Lord was at least a bit more intelligent I would make it wait to attack the players after they got some of the treasure. This would make them be cursed and easier to battle. However, I don’t think it would just let the players grab its treasure.

These actions will be your bread and butter. If there is a reason why your Mummy Lord will be able to stand for more than a few turns, it is because of these bad boys. Use Whirlwind of Sand whenever it seems your player characters are going to gang up on the boss. The Mummy Lord should confront a maximum of two PCs at a time. Whenever it is at a disadvantage, it should get away.

Channel Negative is highly situational, so do not ever use it unless you can stop healing enough to end a player with Negative Energy Flood. Blasphemous word works great as an area crowd control ability, but due to its short range, only use it when more than one player corners the Mummy Lord and it has enough hit points to resist an opportunity attack should one of the players make the save. Last but definitely not least, blind spellcasters that the Mummy Lord sees able to cast fire attacks with Blinding Dust.

There are some spells from the Mummy Lord that deserve notable mentions, mostly for how good they look being cast from it. Harm is an awesome one that should be thrown to the first one who dares attack the Mummy Lord with some fire weapon or spell. Insect Plague and Contagion are also excellent ones and do create an outstanding image just by imagining them (The Mummies’ scarabs are the first thing that come to my mind). Just make sure to save one of those two 5th level slots for a chance to use Negative Energy Flow in all its glory.

From the 4th level slot list there isn’t much good stuff, so use Guardian of Faith if necessary or save them in case you want to cast lower level spells with them. Moreover, Animate Dead should be used to create some grunts to help in battle (the Mummy Lord could even have one already prepared before the players arrive as it should know of their presence due to the Lair Action). Lastly, have the Mummy Lord use Spiritual Weapon to make a Khopesh appear, just because they look dope.

One might not think a dead person covered in cloth could be strong. However, Mummy Lords are pretty much good at everything besides Dexterity and Intelligence. In consequence, it can perfectly go punch some people. This generates the Rotting Fist’s curse on the PC’s, which will be extremely fun for them to solve once they get out of the dungeon. If you want to make that curse look even more terrifying, tell them they are slowly feeling as if their inner organs were turning to sand (which they will cough every morning once they wake up). As I was saying, make the Mummy Lord punch as many PCs as it can, avoid getting flanked and paralyze people with its stare just to maul them to pieces after that.

I must admit even though I had some negative opinions from the Mummy Lord once I started investigating, I ended up falling in love with the spells and Legendary Actions it possesses. I truly hope you can get some fun out of this number of things I provided and wreck some PCs with those clothed fists.

What did you think of the Mummy Lord? Are there some things you would add to this encounter? Do you have your own story to tell about one of these monsters? Is there any other monster lair you would like me to create? Tell me all about those things in the comments below!

Want to learn about new monsters? Check out my review of Kobold’s Press Creature Codex to add more strange beasts to your home game.