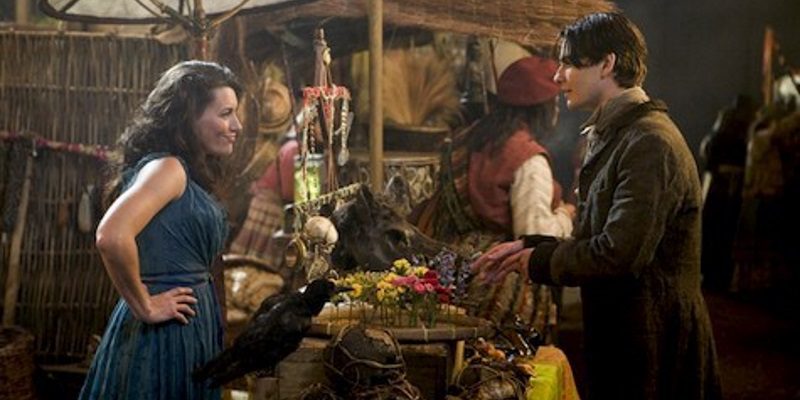 I hope y’all like it when I post collections of largely unconnected magic items, because that’s what I’m doing today. These were originally posted in Harbinger of Doom, and appear here in an updated form.

The learned sages of the Imperial City, who work in the light of the Holy Fire, pen these delicate scrolls – fragile, precious, and as terrible as angels. The scroll itself is three inches wide and two to three feet long. To use the scroll, wrap it loosely around your forearm as an action. When you would take damage from a spell, you can use your reaction to roll an Intelligence saving throw with a DC equal to 10 or half the damage you would take, whichever is higher. On a success, the scroll crumbles to ash, you take no damage, and the spell’s caster can’t cast spells of that school until the end of their next turn. On a failure, the scroll is not expended.

This light coat would scarcely have kept out the cold when it was new; now it is a paltry old thing, made as much of holes as cloth. Its properties are most unusual:

While wearing this leather armor, you gain a +3 bonus to AC, and to saving throws against the paralyzed or petrified conditions. Though as supple as leather, the armor looks like steel, sometimes blackened and sometimes silvery: it is the skin of the legendary gorgon, Sarlacha.

As an action, you can exhale a cloud of petrifying gas in a 30-foot cone. Each creature in the area rolls a DC 12 Constitution saving throw. On a failed save, the target begins to turn to stone and is restrained. The restrained target must repeat the saving throw at the end of its next turn. On a success, the effect ends on the target. On a failure, the target is petrified for 1 day, or until freed by greater restoration or other magic. You can use this feature once, and regain use of it at sunrise.

This silk scarf is red and purple, and is invested with the momentous power of the sunrise. While wearing this scarf, you can perform a 1-minute ritual to experience personal sunrise: all magic items attuned to you regain charges or uses as if noon, dusk, midnight, and dawn have passed. Once you use this feature, you must complete a long rest and witness two sunrises before you can use it again. This rest time applies only to you. (That is, if you transfer the scarf to another character and that character attunes to it (ending your attunement), they can perform the ritual of sunrise as soon as they are attuned.)

Hazel is well-known for its gifts of wisdom and inspiration. The hazel-wand has 7 charges that its user can spend on the following properties. It regains 1d4+2 charges daily at dawn.

If you expend the wand’s last charge, roll a d20. On a 1, the wand crumbles into ashes and is destroyed.

This short sword bears a wave-like pattern in its metal, indicating both a connection to elemental water, and extraordinary talent in its forging. When attuned, it bears the following properties. You gain a +1 bonus to attack and damage rolls made with this weapon, and saving throw DCs triggered by its weapon attacks.

The weapon changes its properties whenever it is used to defeat an amphibious creature, an elemental connected to water, or a creature native to the sea. It does not change if you defeat a second creature of the same category as it already reflects. If a creature could reasonably belong to one or more of those groups, determine the effect randomly at the time the creature is defeated.

The Horn of the Long Night
Wondrous item, rare

When you use the horn as your spellcasting focus and target an undead creature with a charmed or frightened condition to which it is immune, it rolls a saving throw against the effect normally. On a failed saving throw, it is harried by phantasmal hounds of the Wild Hunt for the same duration that the charmed or frightened would otherwise have. While harried, the creature’s speed is halved, it can’t make opportunity attacks, and it makes Wisdom (Perception) checks with disadvantage.

Story: In the distant past, when the world was young and the Veil between the world we know and the Land of the Dead was not yet fully woven, the Archfey warred with the Powers that rule the Land of the Dead – be they gods or greater things still. Now the Archfey are known for holding the will of mortals in thrall, inspiring fear or twisted adulation. The undead that are anything greater than thralls, however, are immune to such influence.

Without the chiefest of their weapons, then, the Archfey were nearly powerless. They stole a pack of Hell’s own hounds and bred them with the finest, fleetest hounds bred by mortals. The get of that breeding they ensorcelled with further power and granted to the Master of the Wild Hunt. He turned his hounds to the relentless pursuit of those who belonged in the Land of the Dead and had slipped its power, through magic.

This horn is fashioned as an echo of the one that the Master of the Wild Hunt bore. It is a glossy black, chased with runes and knotwork of silver. For its bearer, it conjures not the hounds themselves, but their terrifying phantasms.

Most of these items are intended to be little puzzles of references, originally written to entertain my wife. (The scarf of sunrise is especially obscure.) The Skin of Sarlacha is a magic item from Dust to Dust, and is more straightforward in its reference.

Everything else, well, they should still be fun magic items. Um, the scarf of sunrise might be massively game-breaking in the right circumstance. I’m not really sure; it’s certainly one of the riskiest items I’ve written.

The blade of the deep waters is another of my state-shifting magic items. I think they’re typically interesting in exchange for carrying more mental load, so don’t give one of these to a player who’ll be stressed out by it. Consider kicking it up one rarity grade and giving it the first two bullet-point features.

The horn of the long night is – as its story suggests – an overt fix for the problems of Archfey warlock design. I’ve talked about it before, and even directly addressed it with my own variant Archfey patron. I created this for my wife’s warlock, because fey and undead are such strongly opposed powers in my setting.

Art of War for D&D Players