Improve your game with maps! 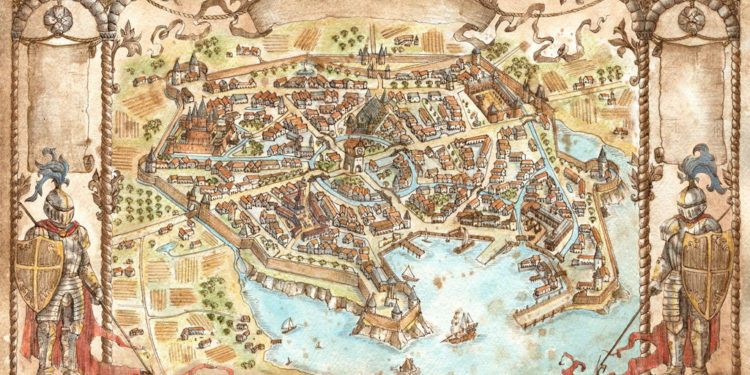 You find yourself in a corridor that bifurcates into three ways.

Rogue: Yeah, and one is supposed to have monsters from what I see here [points to map]

Wizard: We don’t know how long ago this was drawn. Maybe this third corridor was just constructed. The other possibility is whoever drew it didn’t make it out alive from there. I suggest we go through the corridor on the left, the one without monsters.

Ok. You all go through the corridor, Rogue going first checking for traps. You go on this way for a few minutes until you notice Rogue hits a gooey surface and gets trapped in it. That’s when you all notice you just found a Gelatinous Cube. Roll for initiative.

Rogue: Wasn’t this path supposed to have no monsters?

Wizard: Guess we can’t trust the map that much after all. Either that or we totally misinterpreted it. Now shut up and start stabbing that goo!

Maps are a classic thing when it comes to TTRPGs such as Dungeons & Dragons. While being super useful for dungeons, cities, towns, regions, kingdoms, and much more, they are also something players love having in their hands. Today I wanted to talk about the many uses you can give maps in your game while demonstrating how easy they are to make and why you should make some from time to time.

The best use for maps, in my opinion, is for dungeons. Most modules do come with some maps you can print if you don’t have the time to draw them or prefer having them clean-looking. However, nothing beats a horrible looking incomplete homemade map with blood looking paint sparsed on top of it. The best part is you don’t even need to be good at drawing to make it look realistic. Medieval adventurers surely were not great artists, so the worse it looks the better it will feel. 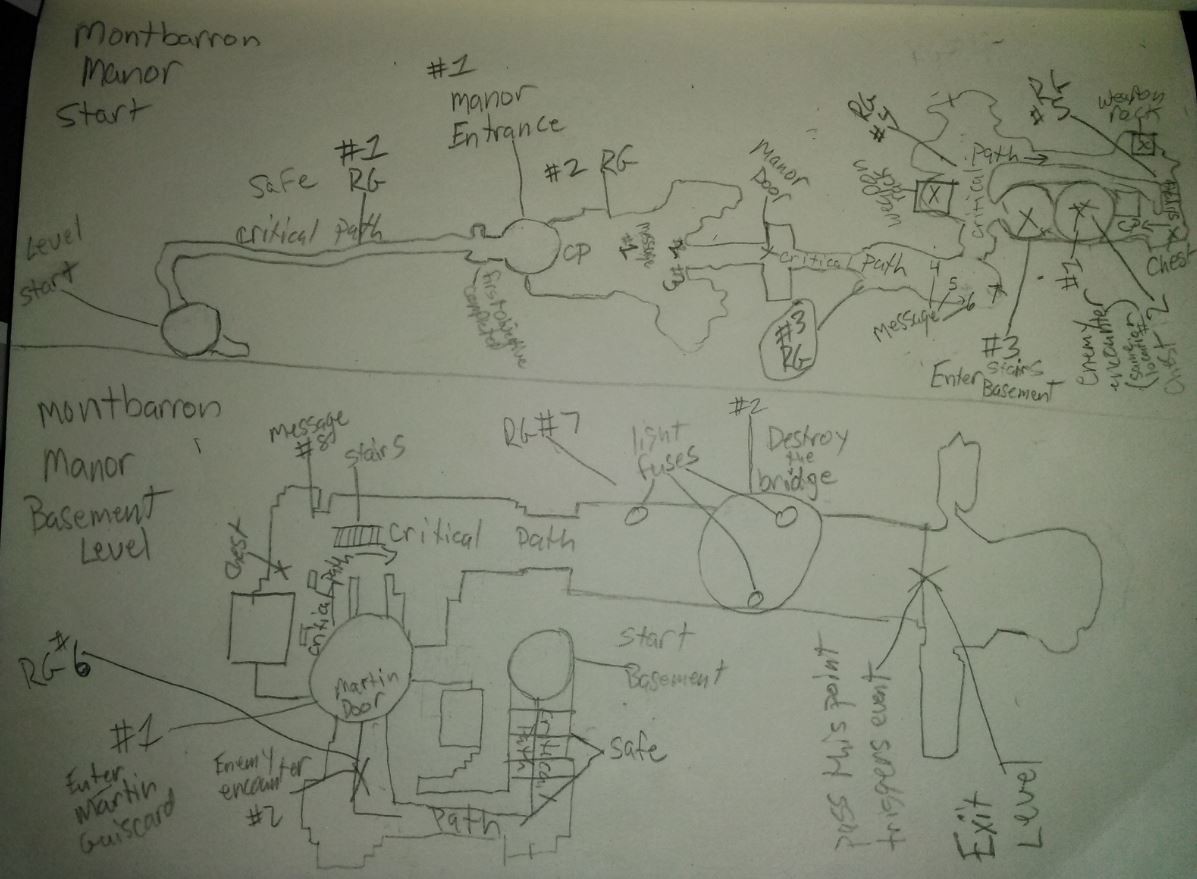 Encourage your players to make their own maps! This is a task that isn’t as easy as having the map drawn by the DM because the player can’t really see the room their character is in, nor the dimensions it has. If someone does offer themselves to be the cartographer mention the average room dimensions every time they enter a new one. The map does not have to be perfect, but it should not have overlapping sections either. If you start noticing your players are getting frustrated with this activity drop it completely and continue drawing them yourself or go full Theatre of the Mind. These kinds of things should never take the fun away from the players.

Maps themselves can also work as puzzles elements when in a dungeon. Mazes, for instance, are classic puzzles that can be solved with a map. By having all corridors in it be straight 5 or 10 ft lines it gets very easy to describe how the path the players are going through looks like for them to draw. What if the dungeon itself is the answer to a riddle, which can only be uncovered by having it drawn? 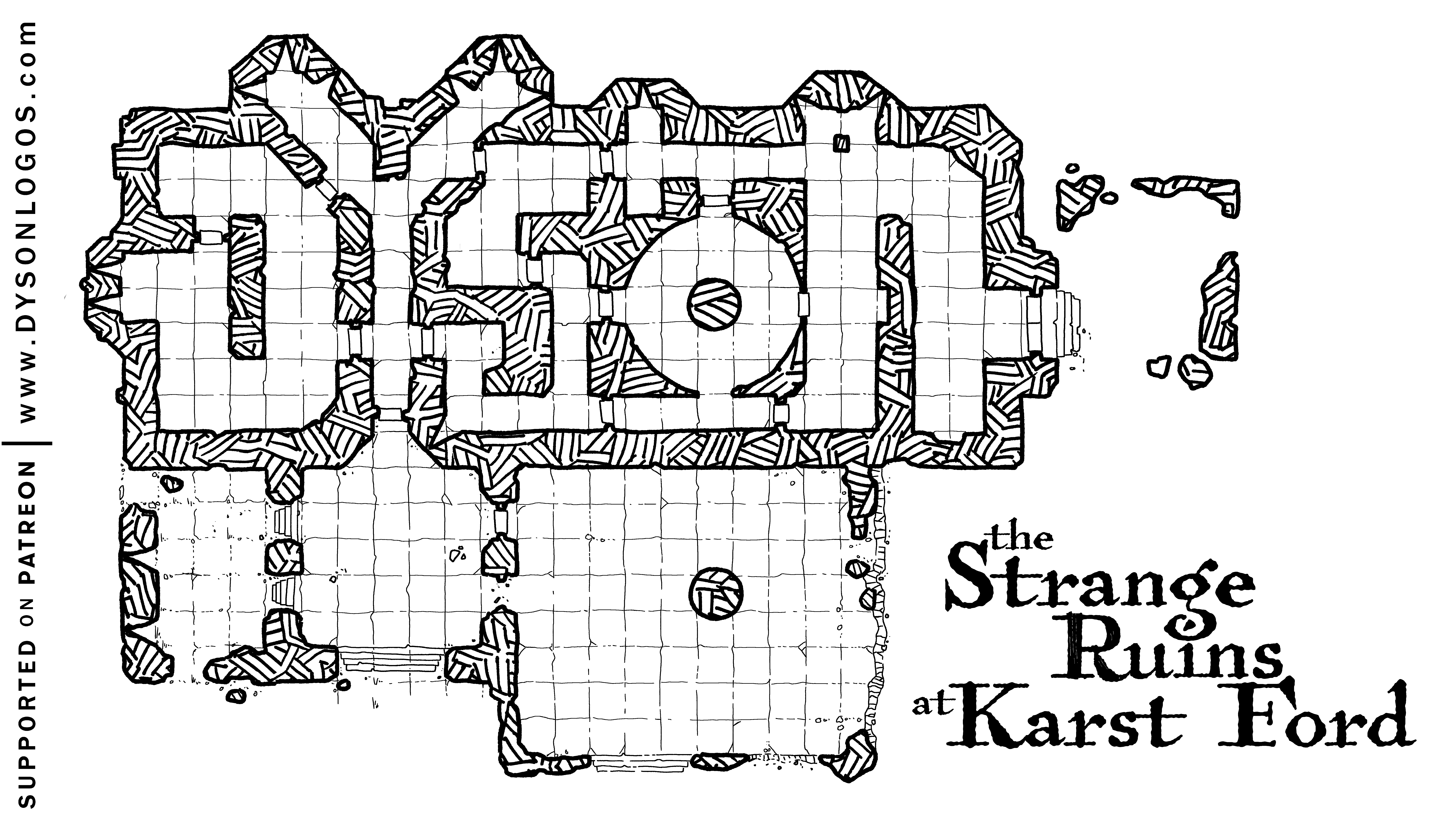 Even though most times maps are made to guide someone through the dungeon, it could also very well be used to make adventurers fall in someone’s trap. Barry the map vendor could sell a map to the players that doesn’t show the traps in it, while also sending them to their inevitable doom against a dormant lich. Barry could make this just because he does not like the players, but what if he is actually working with the lich to steal the players’ magic items once they die?

Maps could be incomplete as well, drawn by past miners or adventurers who failed in the search for treasure. Corridors may not have been crossed. Doors might have been marked with “Monsters be behind door”, or even traps circled in it. They could be showing parts from deep inside the dungeon that may not be useful while in the entrance. The dungeon can also have changed over time, meaning the map is not updated with the latest traps, mechanisms, and doors added.

If you are going to be playing a whole campaign in one location you might as well have it mapped. Very important cities your characters visit are also nice things to have this way. I recommend only doing so in those cases. Mapping locations limits them. If you as a DM forgot to add a temple to Pelor in a town you already mapped you might not be able to or will have to draw it all over again. Only draw locations you are not going to change, or that are big enough you can’t detail every little thing in it. The Waterdeep map from Waterdeep: Dragon Heist is a great example of this: It looks great, offers a lot of details but leaves enough place for the DM to say there is a tavern in one corner, for example.

If you are going to be creating maps take a look at the ones already offered by the D&D modules. These will inspire you enough to create all the important aspects a place like the one you are creating should have. Don’t worry if you feel like you won’t be able to ever create a location map as good looking as those. Neither can I. Nevertheless, a simple looking one tends to be more than enough for players and they sure love having these kinds of handouts. 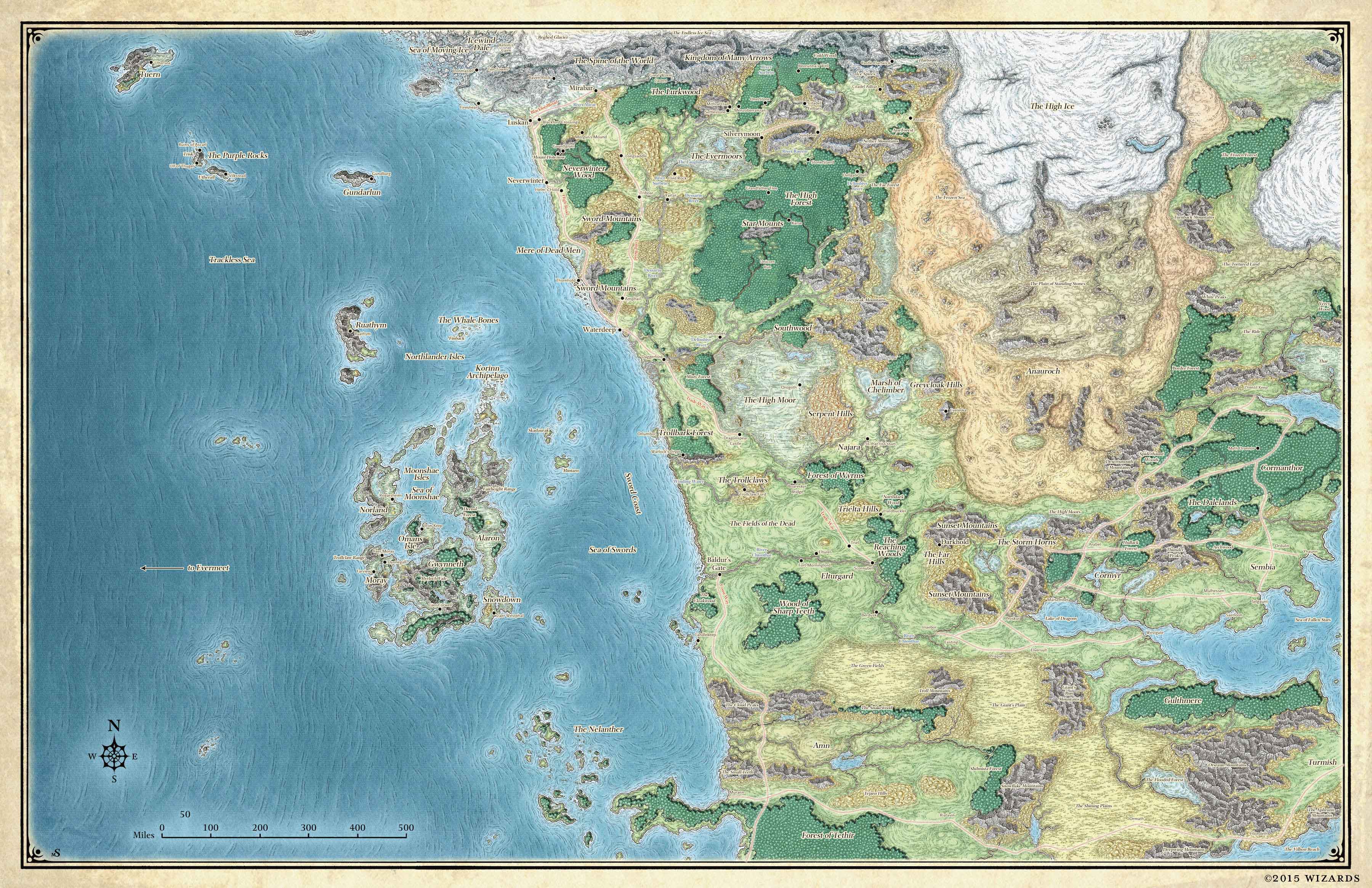 If you have ever seen an antique map you might have noticed they liked drawing sea creatures or monsters in the oceans, big trees in some areas or even statues to mark big cities. You, as well, should make the details stand out in your map. If your town is known for having the great ancestral apple tree in the top of the near hill have it drawn in the map as a reference point. Maybe the city has a castle in it, or some great ruins. Draw them too! Doesn’t matter if they look good. As long as someone can more or less understand what they are looking at it is ok.

Having little details drawn in your map greatly improves players’ curiosity. If they see a cave drawn in the Kingdom map they may want to travel great lengths to explore what is there. The city clocktower that figures in the map can also be used as a meeting point after some shopping.

How much have your world’s lands been explored? Is cartography a thing in that world? Or are cartographers just wandering artists wanting to get a full picture of the area they live in? Determine this as soon as possible in your campaign so you can know if this profession is a common thing or not. How rare are them? Their rarity will determine how pricy their products should be.

Some cartographers can be more experienced than others. In case you want to give your players something more professional looking you can always use software like Inkarnate. However, no matter how bad or good you are at drawing, I can assure you that some few tutorials can truly change the way you draw. Give map making a try by looking at the videos from Wasd20. You will be surprised at how much better you will do after watching them. 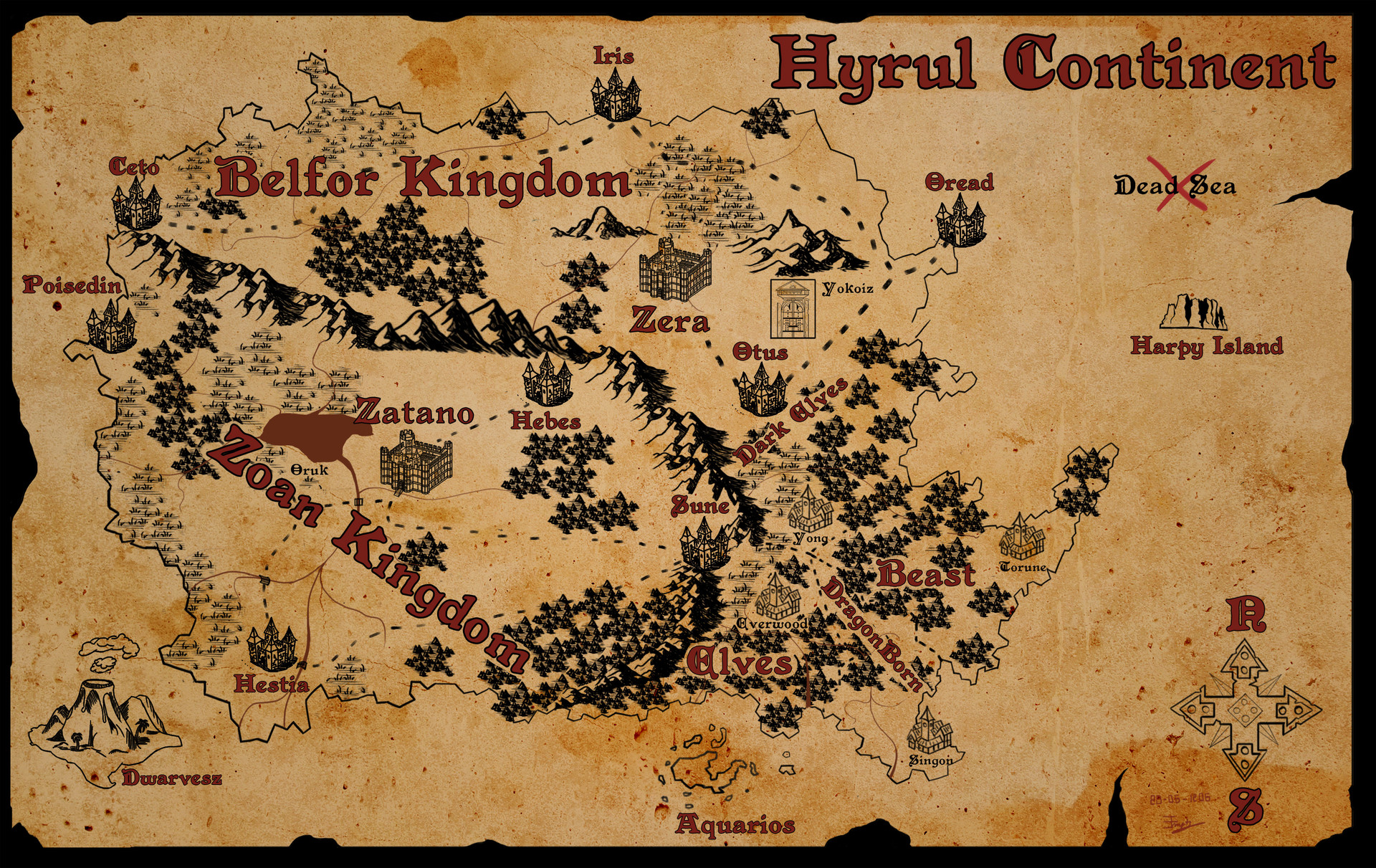 In case you are running a D&D module, did you know you can get the maps from the modules in HD? The authors that drew them usually sell them at their own websites. I may be forgetting someone, but you can find most of them in here: Mike Shley, Jared Blando and Dyson Logos. For a pretty low price, you can get access to full size and high-resolution images to print out or use in virtual tabletops. I did this with Mike Shley’s map Waterdeep map for my Waterdeep Dragon Heist campaign and my players love it.

Maps aren’t a necessary thing when playing TTRPGs. However, players love handouts, and the more you can give them the happier they will be. The best part is you don’t even have to spend that much money. A terrible looking, broken, and blood-spilled map is more than enough. And just in case you want to give it that antique parchment look you can make use of the coffee method so it looks even better!

Do you usually give maps to your players? If so, are they usually dungeon or city/towns/regions ones? Do you usually hide stuff within your maps? And, last but not least, do you make them yourself or have them made by a software or artist? Let me know your answers in the comments below!

Are you running a seafaring adventure? In THIS article I wrote about 20 different encounters your players can find while sailing the seas.