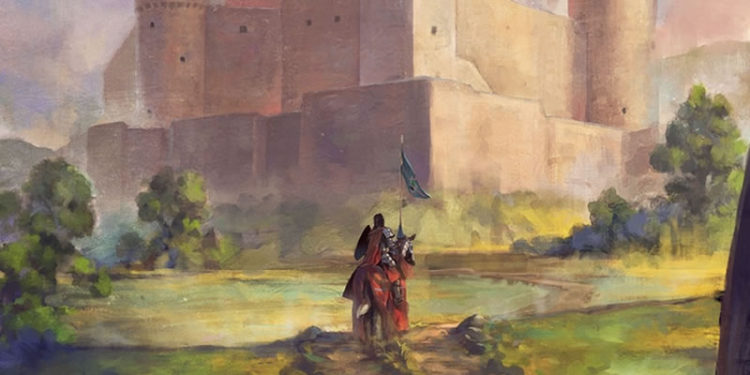 The last time I worked on my Strongholds & Followers series was… oh, six months ago, almost to the day. How about that. I’m returning to it now at the request of a treasured reader, though there’s basically no danger of me getting to the part of the book he wanted me to examine in this week’s article. (We’re also gathered here today to celebrate completion of initial editing on Seas of Vodari.)

In Part One, I mentioned that each class also has a unique interaction and benefit from its stronghold. The general form is that each class has three demesne effects (you know, like lair effects that monsters get), three stronghold actions (like lair actions), a class feature improvement, and a table of followers. The GM chooses any number of the demesne effects that function for the PC. Stronghold actions are each (separately) once-per-short-rest. The rate at which you gain followers gets some mild guidance in the text, but overall is left to each GM’s sense of narrative timing. Multiclass characters can choose between their classes for each of these – you can’t have more than one class feature improvement at a time, but you can switch between them as part of an extended rest (as a reminder, that’s a week).

Just to refresh your memories from Part One, all of these features are explicitly intended to unbalance the game in the players’ favor. That’s the incentive to engage with the system in the first place. There’s not a ton of guidance here on what the DM needs to do to get back to balance.

A footnote calls out that this is not the same as the other kind of druid’s grove, which I talked about in Part One. Infelicitous wording, though.

The rain may never fall till after sundown
By eight the morning fog must disappear
In short there’s simply not a more congenial spot
For happ’ly ever aftering than here
In Camelot!

Which brings us to the end of the player-side class demesnes. I do wish these were a little less over the top in power, because staging a challenge means it’s a bigger fight where the PC of that demesne gets most of that session’s spotlight time. I’m sure it’s fine in Matt’s style (I’ve watched only a few of his YouTube videos, so I don’t grok that style yet), but it would be rough in my style. They’re definitely appealing as a player and make you want to get involved in building a stronghold. Much like Birthright, you really don’t want to be the one party member who doesn’t (yet?) have a demesne, though.

It’s hard to tell how hard you’d have to hit a PC stronghold with a villain and minions to get anywhere with presenting a threat. The abilities offered here are cool, but not remotely similar to the scale of player abilities. The stronghold-versus-stronghold exploration play that the text proposes does sound like a lot of fun, at least.

There’s a great table of special allies, sorted by alignment. Sorting anything by alignment is a curious decision in 5e, but okay. The idea of gaining a young or adult dragon as an ally is fun, but the terms of “alliance” are much trickier, as the text suggests. You don’t so much give orders as tell them your plans and hope for the best. In fairness, the players in my campaign sort of have a copper-green dragon ally, now that they went to the trouble of bringing him back from death after killing him. (Dragons in my campaign are all chromatic-metallic mixes and alignment-ambiguous.) All relationships have their problems.

Anyway, powerful creatures that you can go have a conversation with to see if they can help you never really gets old, as long as they’re not so motivated to help that they solve your problems for you. Adult dragons, storm giants, and the like are more patron than ally until mid-late play, I would expect.

I don’t want to be unfair to this text, because I still haven’t read the whole book thoroughly. The mechanics of this section seem unpolished to me, which is unfair – that’s my association with vastly powerful abilities handed out unevenly.

Leaving it here, at the end of Chapter 1 – next time (which I hope will be less than six months from now) we’ll get into the followers part of Strongholds & Followers.