How to create tension in your game 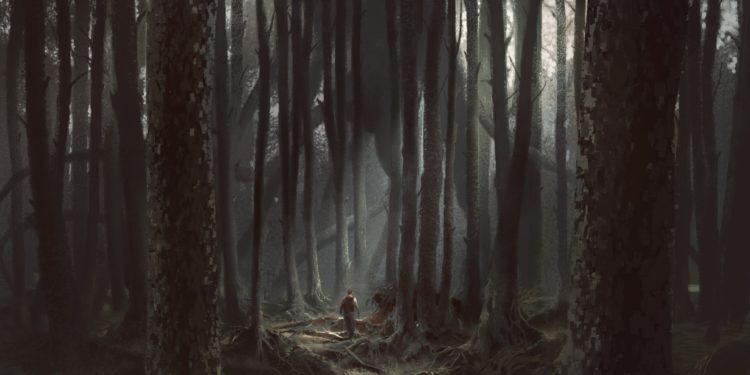 It’s been a long while since I did one of these articles on how to be better at a certain aspect of DMing. After mastering some horror games, watching some movies of the same kind, and watching some TTRPGs horror live streams, I think I’ve learned just enough to share my knowledge.  However, it was one experience in my last campaign that truly made me realize I did get the grasp on how to create tension.

In order to fully understand how to create this feeling on our players we need to talk about tension itself and how media creates it:

In media, the term tension is not often used, replacing it with the word suspense, mostly used in horror or thrillers. Wikipedia states that suspense “gives the viewer a feeling of pleasurable fascination and excitement mixed with apprehension, anticipation and tension”. This is what we as DMs should try to achieve. Don’t worry, though. Even if it sounds like an impossible task, I can assure you there are extremely easy tricks you can pull off to create this effect. There are several key factors that must be taken into account, however, to improve the chance of creating something like this. 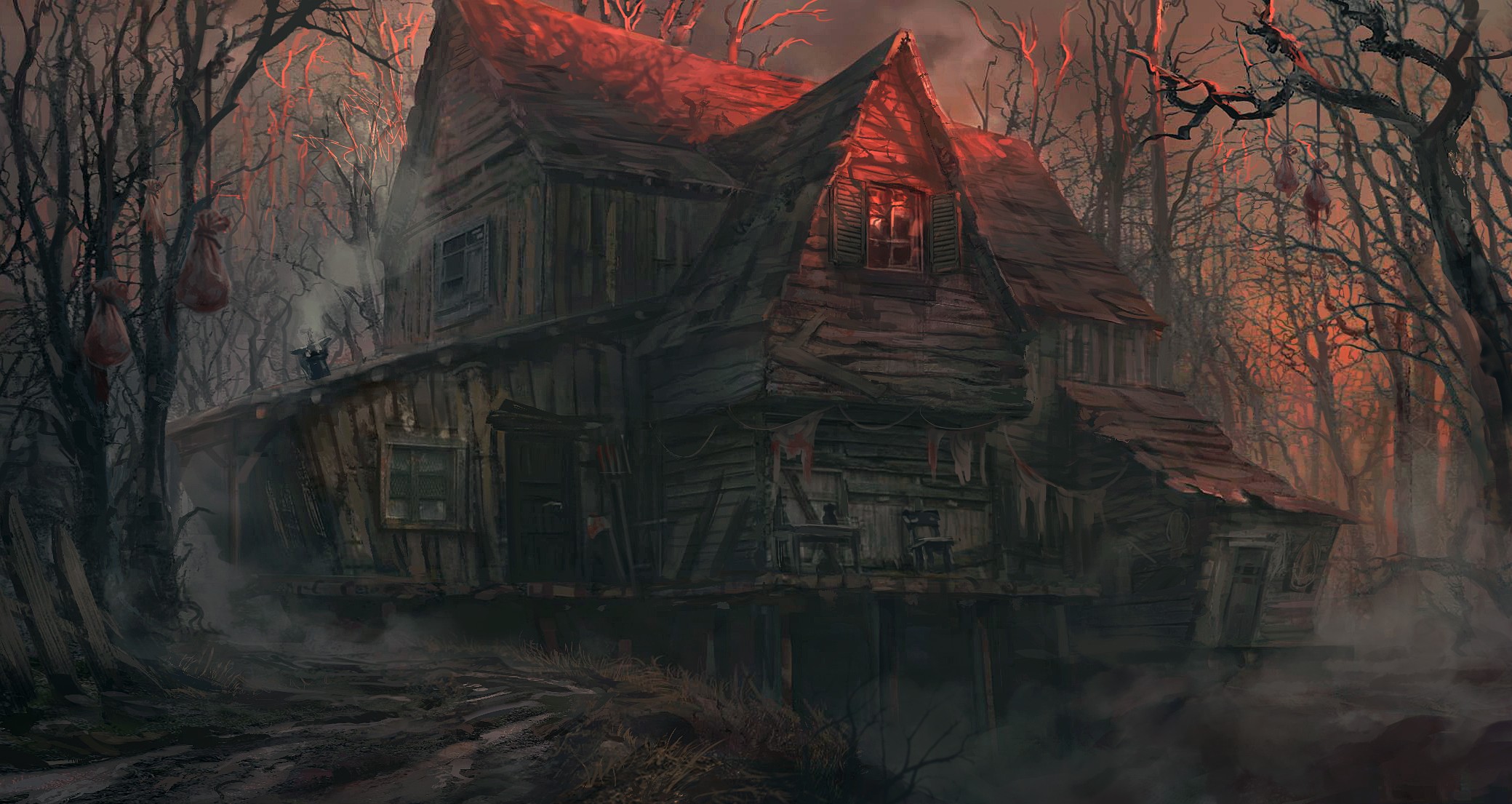 Even though these tips will seem to only work with horror TTRPGs, I can assure you that games such as D&D in which players can easily take out monsters, one can also implement moments of this type to the game. It’s a bit more difficult, but with the right preparation, you will pull off one a scary tense moment into your D&D game in no time. What’s more, the most important piece to creating this is already imposed into the mechanics of the game:

Haven’t you got that moment in which the players are all low on health against the dragon, the fighter’s turn comes up, and its roll will be vital in determining if it’s going to be a TPK or not? A single die roll can create a gargantuan amount of tension at just the right moment. All eyes are placed on the geometric shape as it rolls in the table. Both players and DMs are biting their nails while sitting at the corner of their seats. It’s an 18! Now the important part happens: Will the damage roll be high enough to kill the dragon?

Dice are vital for D&D to work, and are no doubt the factor that makes it such a great game. Randomness creates drama, and drama creates tension. Social interactions during roleplay, or exploration can be just as stressful, in a good way. However, a DM needs to fabricate these moments, as they don’t normally appear on their own. D&D characters are often very strong and can deal with any problem they face, making fear disappear. That’s why you need to take some extra precautions when trying to scare them.

We all know the common phrase “Never split the party”, and I am pretty sure we all saw enough Scooby Doo to fully understand that statement. Your players need a good reason to do this, or they will never split their forces. One way to create this is by putting a time limit on them to do several things at once (using timers is one of the greatest weapons in your arsenal when trying to inflict panic). You may also have your players create a heist (may I suggest one I created?), forcing them to investigate several locations at once before an event happens, or they are discovered. Some traps in dungeons can easily create something like this, such as having a big rock fall in between the marching group.

To show you how easy it can be to create tension I will exemplify with the moment I pulled off in my home game: In order to investigate a nobles’ manor, the paladin in the group was tasked to infiltrate as a guard and investigate on their own. This idea was obviously pitched by a highly intelligent NPC, so the PCs thought it was the right choice. The rest of them would wait outside the manor just in case, but they would be too far away from the action. 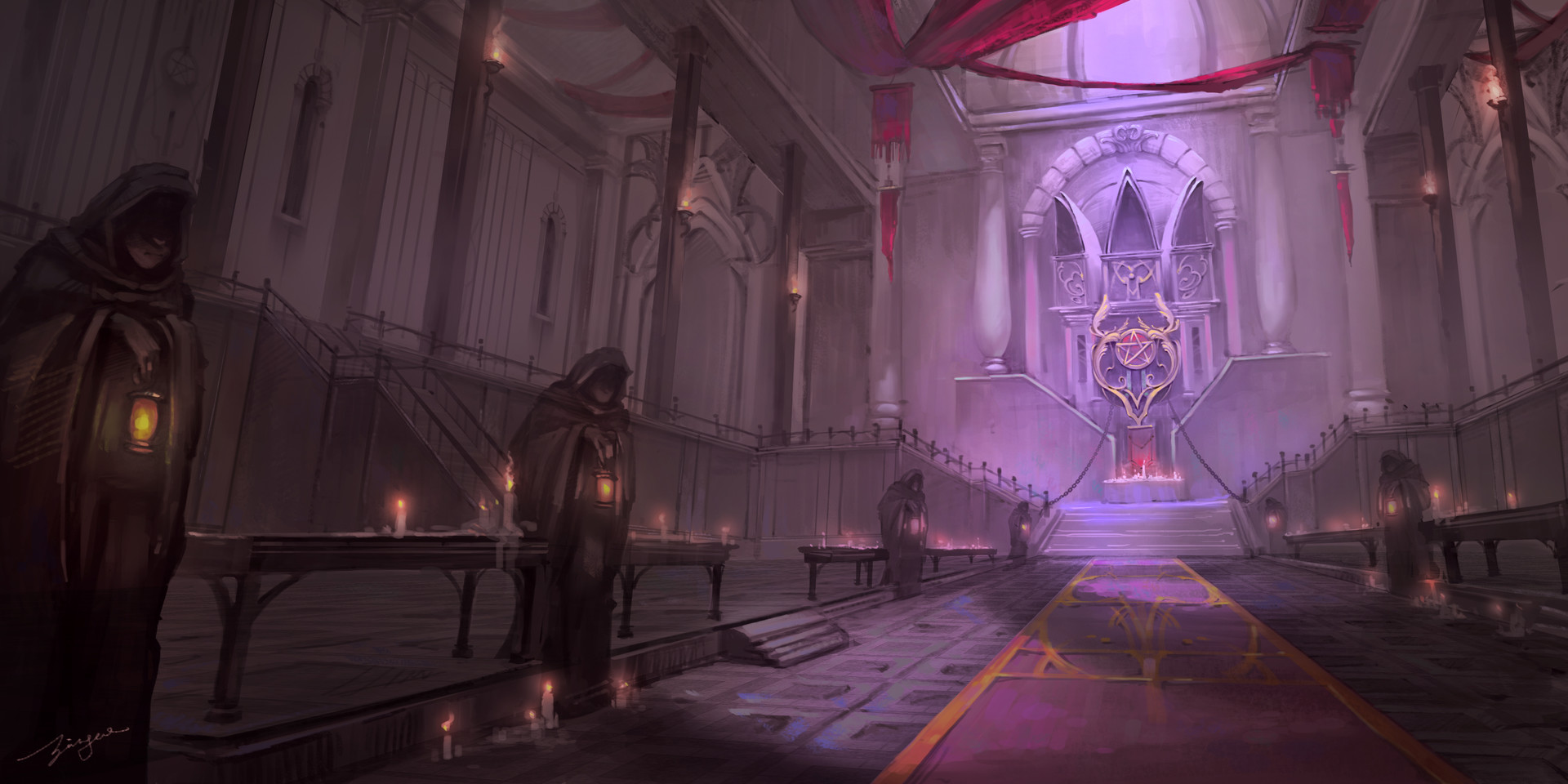 Fear of the unknown

Something all the best horror movies have in common is they don’t show the monster until the last moment. The fear of the unknown is, as well, something most humans have in common. Play with the sounds and descriptions, make the characters think they are always being seen. Paranoia will work against them and soon you will see how every player starts theorizing far worse situations than the one that actually is going to happen. Make each moment last, describing in detail.

Shadows move around your players, they find a corpse on the ground with a frozen terrified expression, but no mark showing how it died. Enemies move past the radius of the PC’s darkvision, making only those see undistinguishable figures in the distance. Are the players trying to get through a sleeping dragon? Will it awake if they sneak past him? Talk about how the leaves on the floor crack and make some little noise. Are they now getting close to the dragon’s mouth? The dragon now has apnea and stops breathing for some seconds while they are passing through. Stay about 5 seconds in silence looking at your players’ faces with a big smile on yours. See as tension peaks towards the heavens.

Going on with the example I was telling you about above: The paladin went down the stairs to the basement, all making a creaking noise as he stepped on them one by one. I continued to make creaking noises. “One of them breaks! Your foot goes through it making a big noise. Did the nobles hear you? You hear some footsteps getting louder coming from where you came.” I purposefully extended with my descriptions all the things the player wanted to do as if time was taking way too longer than he wanted in his mind. All players were biting their lips. I, on the other hand, described how he heard some voices going near the entrance to the basement, only to then slowly fade in the background as the voice walked away. 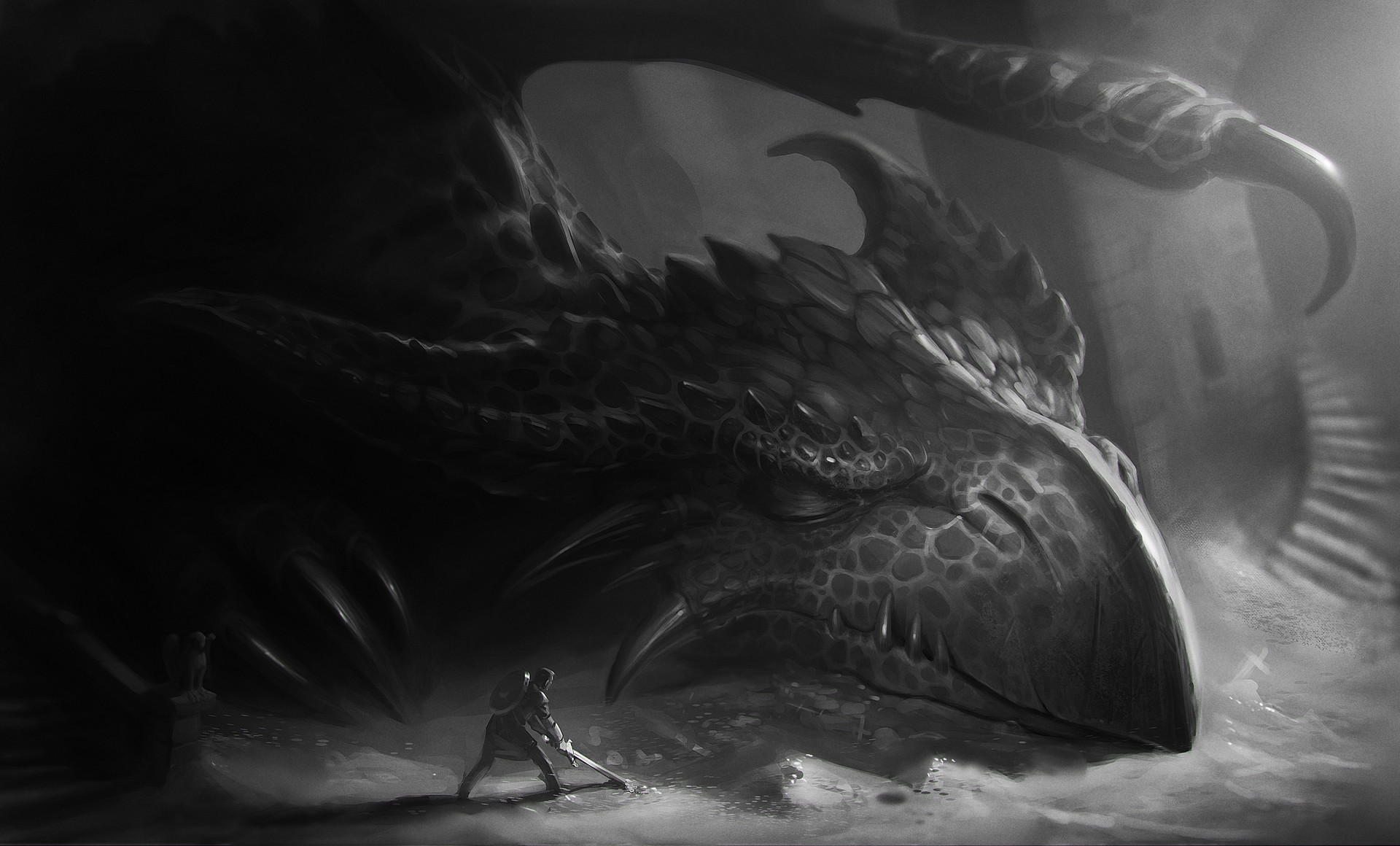 The only thing that might be even scarier than the fear of the unknown must be the background music during scary parts in horror movies. You know, those sounds that make your heart stop punding for some milliseconds and you subconsciously hold your breath. Have some music ready from Youtube, Spotify, or bought from some TTRPG music creator (there are some such as the ones from PlateMailGames that are just fantastic). Suspenseful ones tend to be the best for these moments.

Be sure to let everyone know they should remain quiet during these scenes. If there are other players talking in the background, or if you are playing in a crowded place such as a con or the middle of someone’s house try to move to some other place or ask them to lower their voice. Background noise instantly kills the ambiance and immersion you can create. 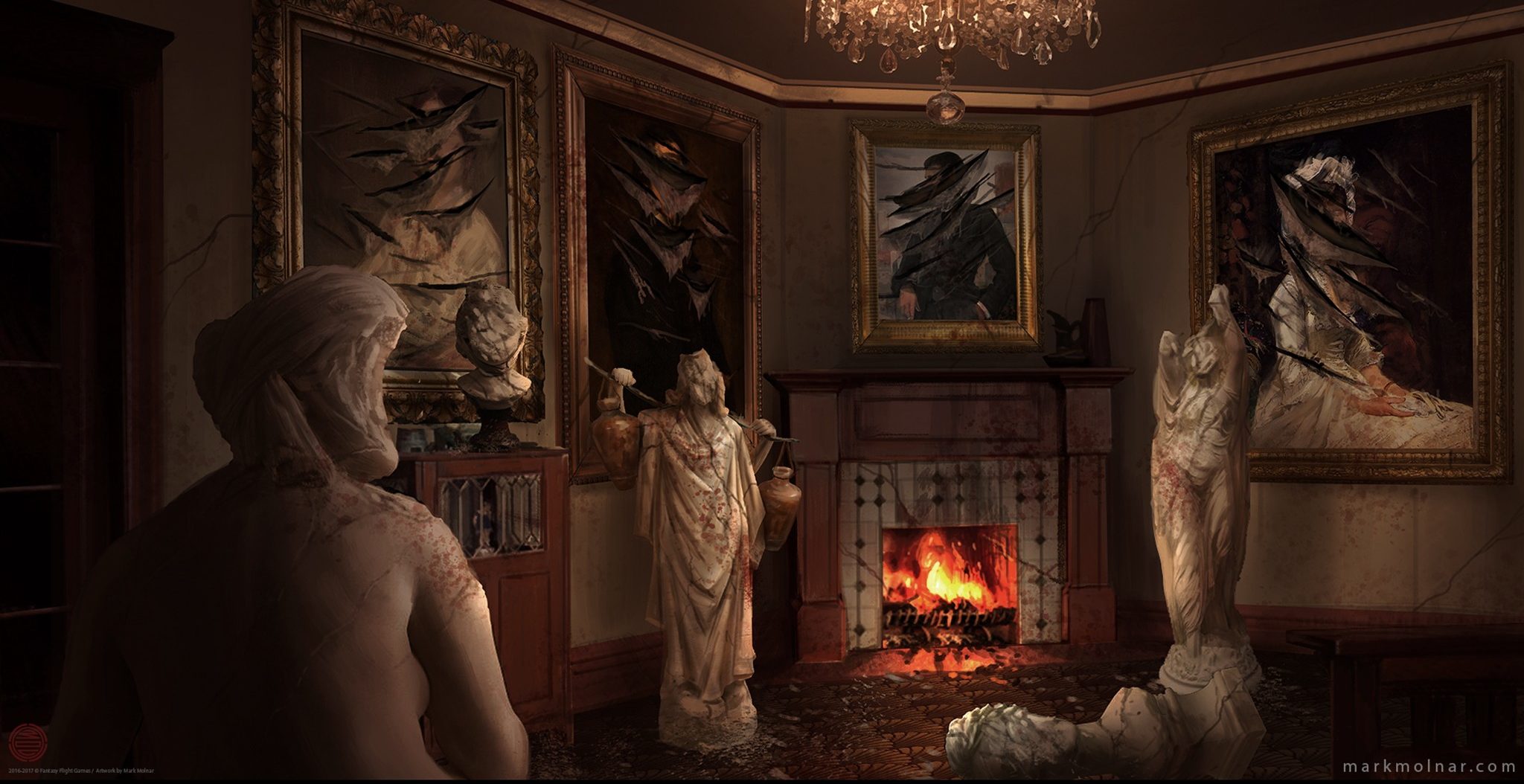 Directly linked with the sound, your voice as a DM is the final tool in your toolbox. You will be impressed by how much tension you can create just by adjusting the tone of it. I’ve talked about this in past articles, but I can’t stress its importance enough. When things start getting more and tenser, lower your tone of voice and volume of speech, almost whispering, as you keep describing the scene. Involuntarily, players adjust their voice to yours. They lean forward to hear you better, and pay closer attention, making each word you say impact more. The stair steps I was talking before that made creaking noises? Make the noise in a much higher volume than the one you are making your descriptions in. This greatly immerses players, as they whisper because they want their characters to remain quiet, and you will make them flinch as you make the noises, or raise your voice to describe the movement of something in the distance.

Maintain the tone of your voice that way and start asking the players rhetorical questions, as if those questions were in the characters’ heads as they continue their mission. “What is going to happen if they discover you?“, “Am I really good enough to get through this?“, “What will the others think of me if I fail at this?“. Your voice is your most powerful tool, and you should do well in using it. You’ll find out it is much easier than expected!

If you follow my tips and tricks, you will have a very suspenseful and tense moment in no time! Read some horror novels and watch some horror game streams to gather some “horror vocabulary” and steal phrases for your game. Pay close attention and try to find if those streamers use the tips I am giving you. If they worked for me, they will surely work for you!

Want some extra horror for your games? Consider playing another RPGs. In this article I talk about my experience with Dread. If you and your players like tension and horror you should definitely try it out!