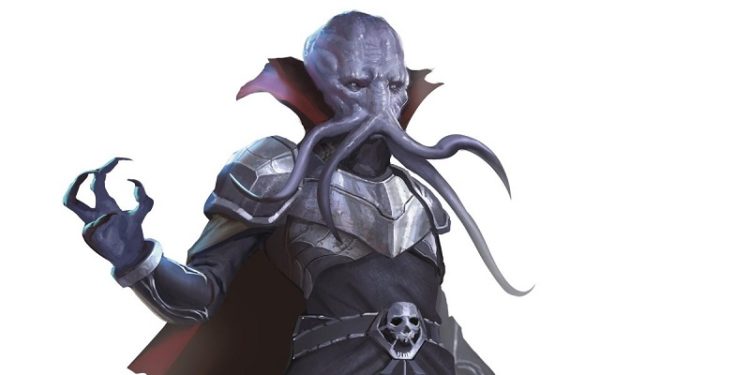 The Mindflayer, or Illithid is a creature that is from the Far Realm, though some have posited that they are actually from the future. Regardless of the truth, they are a race that uses Spell Jamming to travel the Crystal Spheres. At one time, their empire spanned many worlds. They were once a common sight, even among elemental planes. An empire built on the back of slave labor, the Mindflayers seemed unstoppable. They didn’t know it at the time, at the height of their power were the seeds of their destruction.

The Decline of the Illithids

But that time is long since passed. The creatures they used for slave labor, food, and reproduction rose in revolt, shattering their empire. Now, the Mindflayers hide underground, desperately trying to rebuild their numbers and reclaim their place in the universe.

How did this once proud and mighty empire get to its current stage? It could be they overreached. It also could be they were too successful in the creation of their slave races. Or it could have been that they were too large, and a fall from such heights was inevitable.

Mindflayers as Masters of Genetics

One of the things that Mindflayers are known for is enslaving and altering their creations, often much to their dismay. Throughout the years the Mindflayers created the following monsters:

Mindflayers create these rats by bombarding normal rats with psionic energy. Individually, these rats act as if they are nothing extraordinary. Only when they become a swarm can their real power be revealed. When linked together as a swarm, their intelligence soars. Mindflayers use them to spy on surface communities where they act as eyes and ears for the elder brain, transmitting their thoughts when they swarm and are within range of the Elder Brain’s telepathy. They occasionally spread beyond the Elder Brain’s influence.

The Derro are a clan of Duergar that were left behind as they fled the Mindflayer’s slavery. They also eventually escaped, but their entire race became twisted and fell to insanity. These dwarves see a survival at any price, deceitfulness, and cruelty as the only virtues worth having. The Duergar are dwarves that ran into the Illithids deep underground in their search for precious metals and gems. Illithids captured the Duergar and used them as slaves. The dwarves eventually won their independence through the help of an evil deity, but not without a cost. Slavery forever changed them. It darkened their spirits, made them evil, pessimistic, untrusting creatures, always toiling and complaining, with no memory of what it means to be happy or proud. They’re still expert craftsmen, yet their works are without warmth or artistry. Duergar makes war against other subterranean races, forging, or betraying alliances as convenient. Despite the slavery they endured, they became the tyrants they abhorred. They take and keep slaves, regarding them as free labor and crude currency.

A combination of choice and circumstance made both of these Dwarven offshoots evil. Maybe the players could go back in time and intervene with history. The players could attempt to save them from their greed initially, blocking their underground path. Alternatively, the players could arrive in time to help them to escape the Mindflayers. Depending on which branch they’re helping, the dwarves could be grateful to the players or betray them.
Another plot could be that the players could enlist the Duergar as help out during a Mindflayer invasion. Whether they would be good allies or not would depend on a variety of factors:

The warlike Githyanki learned from their subjugation by the Mindflayers that they should rule through the rule of force. They raid the Prime Material Plane brandishing their silver swords from the back of red dragons and their Astral Ships.  Feathers, beads, gems, and precious metals decorate their instruments of war.

The ascetic Githzerai, on the other hand, choose to embrace philosophy, pursuing self-knowledge. They are an austere and frugal people, favoring practical and unadorned clothing, with at most some simple jewelry. Many Githzerai train as monks, while others choose to become Wizards. Some multi-talented Githzerai became “Zerths,” blending magic, combat, and psionics into their fighting.

Both the Githyanki and Githzerai hate the Illithids. Hate is an understatement. They despise them to such an extent that they will form hunting parties to kill Mindflayers. While certain more moderate Githzerai might be willing to join a party for this purpose, Githyanki would simply capture the players to use them as slaves. The players might allow themselves to be caught only to escape at some later point. The reason the players would allow their capture is because the Githyanki know how to fight the Mindflayers.

Another way to use the Githzeri in your games is to have them teach them mental discipline/ psionic abilities. The fact that the Githzeri is training them could have nothing to do with the Mindflayer threat. The training could be something they need in the ordinary course of character growth. On the other hand, this training could be something the players seek out before facing upcoming threats. Conversely, the players could have had a close call. The Illithids could have roundly beaten them, and instead of giving up, they ask Githzeri for help.

These sorry creatures were once human cultists who worshiped Mindflayers, who turned them into the hideous creatures they are today. Illithids subverted the cultists’ high priests who corrupted their follower’s faith. The cultists became enslaved, eventually becoming fervent cannibals who regarded the Illithid’s brain-eating of the Mindflayers as a holy sacrament. The Grimlocks abducted other sentient creatures at the Illithid’s command. After the Mindflayers ate their victims’ brains, they turned the lifeless bodies to the cultists.

These crust-covered brains walking around on clawed feet are the Illithid’s “dogs.” An intellect devourer is created by taking a slave’s brain and subjecting it to a horrible ritual. They exist to devour their victim’s mind and memories, turning the host body into a puppet under its control. Using their host body as a puppet, they lure others into the Mindflayer’s domain to be enthralled or consumed.

At one time, the Illithids enslaved these fish-like creatures, but for reasons unknown abandoned them. By the time the Illithids freed the Kuo-toa, they had gone insane. Currently, they live deep underground. Their shattered minds make up deities to worship with religious fervor. With their collective ability to alter reality, they bring their protectors to life.

Kuo-toa fanatics worshiping an aboleth capture the players, forcing a confrontation with the aberration.

A group of Kuo-toa have created a deity that threatens the entire Underdark. It’s up to the PCs to persuade them to abandon their faith.

Mindflayers experimented on the slimes, jellies, and puddings that infest the depths of the Underdark, creating the Oblex – a slime capable of assaulting the minds of other creatures. These amorphous creatures drain the memories of their victims, engulfing them if they are close enough. It mainly targets those with sharp minds such as spell-casters. If the victim survives, the experience leaves its prey befuddled and confused. If the creature dies, the Oblex forms an unnatural copy of its victim, complete with a warped personality. These copies are not perfect, however. To someone observant, they smell of sulfur. These copies help them to harvest even more victims for their vile masters.

An Oblex replaces a high ranking official with a copy and tries to lure others into its grasp. Everyone who encounters him/her has no recollection of their meeting. It’s up to the PCs to figure out what’s going on.

The Mindflayer empire was one of the most successful empires in D&D. Then something happened that caused its collapse. By playing with the lore, using time travel, or introducing some of the creatures that they permanently altered, DMs can highlight the Illithid’s story in their games. Look out for part 2 in the near future.