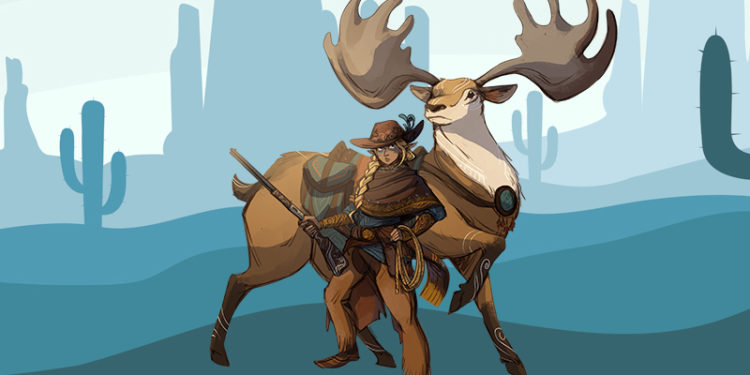 This week on the campaign trail I present a new fighter archetype that would fit well in a wild west flavored D&D fantasy adventure or any campaign where mounted combat or overland travel is a focus.

Let us know in the comments what you think of this subclass. If anyone isn’t familiar with the D&D 5e rules for controlling mounts, see page 198 of the PHB.

A human herding cattle from horseback, a dwarf on a boar rushing into battle, and a mastiff riding halfling charging through goblin rustlers are all Wranglers. The archetypal Wrangler is a fighter who specializes in shooting, roping, and riding. Wranglers are also whisperers who form strong bonds with their trusty animal companions. Most wranglers gain their skillset working as cowhands and ranchers, others from riding with a group of outlaws rustling livestock and robbing stagecoaches. Either way, when you ride into danger you’re in good company with a Wrangler at your side.

When you choose this archetype at 3rd level, you gain proficiency in two of the following skills of your choice: Animal Handling, Perception, Performance, or Survival. You can choose to gain one tool proficiency in place of one skill proficiency.

Starting at 3rd level, you develop the ability to create a

close connection with one creature that becomes your mount. Your mount is a beast, is one size larger than you, has a CR of ¼ or less, walks on four legs, and does not have a fly or swim speed. Work with your gamemaster to find the best fit from a boar, a camel, an elk, a giant weasel, a giant lizard, a mastiff, a mule, a panther, a pony, a riding horse, a wolf, and other options based on the surrounding terrain.

Over the course of a day of work (8 hours), you create a bond with your mount that provides the following benefits.

Whisperer’s Bond. Your mount’s abilities, game statistics, and other rules are modified as follows:

Training Boon. Training provides your choice of a boon to your mount. Choose one of the following improvements for your mount. You can choose an additional boon at 10th level and 18th level, but you must choose a boon you have not selected previously.

Whisperer’s Commands. Your mount can be trained to do simple tricks or make a noise on your command. Your commands can come in the form of a word, whistle, or other noise and even be combined with hand signals. Your mount obeys your commands as best it can.

In addition to Dash, Disengage, and Dodge, your mount can be commanded to take the following action options on your initiative, whether you are mounted or not.

At 3rd level, your experience with roping has made you an expert with the lasso. If you have a 30-foot length of rope, you can create a lasso as an action. In your hands, a lasso is a martial ranged weapon that you are proficient with, has the thrown (15/25) and two-handed properties, and deals no damage.

A Large or smaller creature hit by a lasso is restrained until it is freed. You can also choose to have the creature make a Strength saving throw with a DC of 8 + your proficiency bonus + your Strength modifier or be knocked prone. A lasso has no effect on creatures that are formless, or creatures that are Huge or larger. A creature can use its action to free itself or another creature within its reach. Dealing 5 slashing damage to the lasso (AC 10) also frees the creature without harming it, ending the effect and destroying the lasso.

When you use an action, bonus action, or reaction to attack with a lasso, you can make only one attack regardless of the number of attacks you can normally make. You can not use the lasso to make an attack while a creature is restrained by it.

Starting at 7th level, you have learned to focus your courage to protect your herd, crew, or anyone you care about. When a creature hits an ally within 15 feet, you can use your reaction to move yourself (or your mount if mounted) up to half your movement speed, take the damage yourself, and make a melee weapon attack against that creature. You have resistance to the damage dealt by the attack.

Once you use this feature, you must finish a short or long rest before you can use it again.

Starting at 10th level your bond with your mount continues to strengthen and training has made the pair of you more effective as a fighting team. Whenever an attacker that your mount can see hits it with an attack, it can use its reaction to halve the attack’s damage against it. Your mount also regains a number of hit points equal to your fighter level when you use your Second Wind feature.

Advanced Whisperer’s Commands. Your mount can be commanded to take the following action options on your initiative, whether you are mounted or not.

At 15th level, you’ve spent years shooting at far off targets both in and out of the saddle. As a bonus action, you can take careful aim, gaining advantage on your next ranged attack before the end of your turn. You can use this feature a number of times equal to your proficiency bonus before you must finish a long rest to fully regain its use.

At 18th level, years of working and living in the great outdoors have provided you with a well of energy and endurance to draw from. You have advantage on Constitution saving throws and you can recover a level of exhaustion when you use your Second Wind feature.

In addition, you can now use your Second Wind feature twice between short and long rests.

Here’s a table of stats to compare the various mount options for this subclass.

*Replaced with PCs proficiency, allowing for attack bonus to ramp up with PC