I have worked on a Gunslinger class for Dungeons & Dragons 5th edition.  I posted my first version on the D&D 5th Facebook group Gun Slinger class link,  and can be found in the files section. Since then, I have been working on the environment and settings of the Wild West for my D&D game.  I have the old Boot Hill game that I used to play, and the old conversion rules from AD&D for Boot Hill (It’s in the AD&D 1st edition Dungeon Master’s Guide).  I find it nifty that even Gary Gyax thought it was cool to have a time warp and throw gunfighters into the D&D world, and also to take D&D characters and enter a Wild West Setting.  There shouldn’t be a limit to what the Dungeon Master can do with the game.  He even talked about an Alice in Wonderland level in one of his dungeons. Interesting!

With all of that in mind, in one of my D&D games I’d like to stick the player characters in a Wild West Setting. Shhhhhhh it’s a surprise.  It will take a little planning, but I’d like to have a temporal rift that they walk through, then look back and the rift is gone.  There will be a hook, like a lever to pull or a map they need, so maybe they go into it, and maybe they won’t.  Maybe a legend leads them there, and they can see treasure through a strange shimmering doorway. If they don’t go through, then that will just mean a lot of work put back on the shelf.

So the Wild West will need;  horses, guns, railroad, stage coaches. telegraph, Native Americans, Cowboys. Horses are covered, and stage coaches are just wagons.  Cowboys and Native Americans are just humans with weapons so I can make NPC template for that.  Main thing to develop for the campaign are the weapons. So here is my new take.  I’ve reduced the damage on the rifle, and changed the damage die on the handgun from when I created the Gun Slinger Class (see below):

Mobile. Canon and Gatling guns typical transported by horses, wagon or train. then become stationary as they are fired by the operators.
Gatling Gun Operators. There are normally 3 operators. One to crank, one to aim, and one to reload the ammunition. The Gatling gun could be reloaded with one magazine while firing the other magazine. If there are only 2 operators, then reloading would take a round, and the gun would not be fired.
Gatling gun Firing. They are special and have two modes of operation.  One shot and rotating.  One shot acts as a ranged weapon with 4 (1d8) piercing damage. With rotating, the gun uses 20 ammo in one round, half of a magazine. Without reloading, the gun would continue to use all ammo in 4 rounds. These projectiles have an area of effect of a 150ft cone, that requires a Dexterity save of DC 15, on a fail save it causes 20 (5d8) piercing damage, on a success the damage is half.
Canon Operators. There are normally 3 operators of  a canon required to load and fire.  With all operators, a canon would take 1 round to be loaded, then a round to be aimed and then on a subsequent turn could be fired. Afterwards would have to repeat, unless the canon is to be fired at the same target, then aiming would not be required. With less than 3 operators, the canon could be fired once every 3 rounds.
Canon Area of Effect. There are two areas of effect for the canon shot.  The 5 foot radius takes a total of 9 (3d6) and 6 (2d6) piercing & 9 (3d6) plus 3 (1d6) thunder damage. They are determined separately. While the 20 foot radius takes 6 (2d6) bludgeoning and 6 (2d6) thunder damage.  The 20 foot AoE is in place until the start of the Canon’s next turn, any creature starting their turn or ending their turn while the AoE is in affect takes the damage.

All of the gold and silver that the characters may bring into the Wild West will be highly valuable.  And sought after. It might be best if the characters are “separated” from it or they are going to be buying up things.

Gatling Gun and canons are not purchasable, and are controlled by the military.

I didn’t take the TSR Boot Hill maps to use for the setting, but instead used ones from Beagles’ Wild West game, run by W3G, the Wild West Working Group, that show Frome County Nevada.  The maps are pretty cool, and include hex maps that you can use.  I’ve also added the Henryville City Map below. 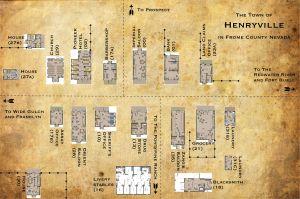 This is the current pdf version of the Gun Slinger class, and I make updated versions on the Facebook 5th edition Group.

For the NPC’s I will just take human commoners, and other vanilla characters and change out their weapons with the ones listed above, and archaic weapons like long bows, and a scimitar for the civil war era saber.  And so here are two Wild West NPCs:

Skills Perception +4, Deception +4
Senses passive Perception 14
Languages English
Challenge 2 (450 XP)
Assasinate. On the Outlaw’s first turn, he has advantage on attack rolls against any creature that hasnt taken a turn.  Any hit against a surprised creature is a critical hit.
Evasion.  If the Outlaw is subjected to an effect that allows it to make a Dexterity saving throw to take only half-damage, it instead takes no damage if it succeeds, and only half damage on a fail.
Brave. The Outlaw has advantage on saving throws against being frightened.
Actions
Multiattack. The Outlaw makes two melee attacks or two range attacks.
Six shooter (handgun). Ranged Weapon Attack +5 to hit, ranged 150/600 ft. one target.
Hit: 7 (1d8+3) piercing damage.
Dagger. Melee or ranged attack reach 5ft, or range 20/60, +5 to hit, one creature.
Hit: 5 (1d4+3) piercing damage

Thank you for reading.  Have fun! 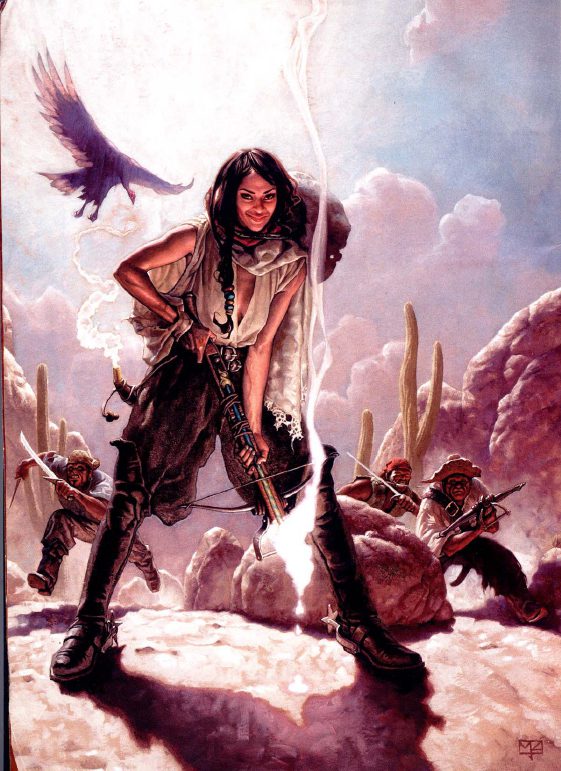