How to create a/multiple sessions with interconnected stories 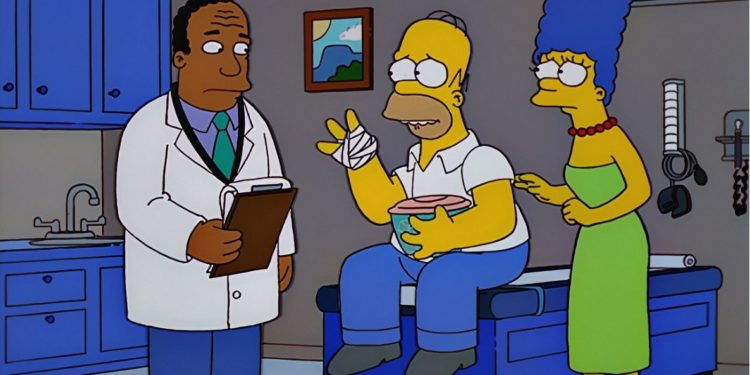 Thumbnail image from The Simpsons’ Trilogy of Error Episode

Something I’ve got to do twice so far is creating a series of interconnected stories in my games. What do I mean by this? If you did ever watch the Trilogy of Error episode from The Simpsons or the movie Go it is based on, you will easily understand what I meant. If not, imagine having your players split the party for some reason, and doing several things at different times that in some way or form altered the story the other characters played.

In order to fully understand how I applied it to a D&D session (mind you can do this in pretty much any RPG by following the steps I am going to tell you), let’s read my first specific event and how it went on: 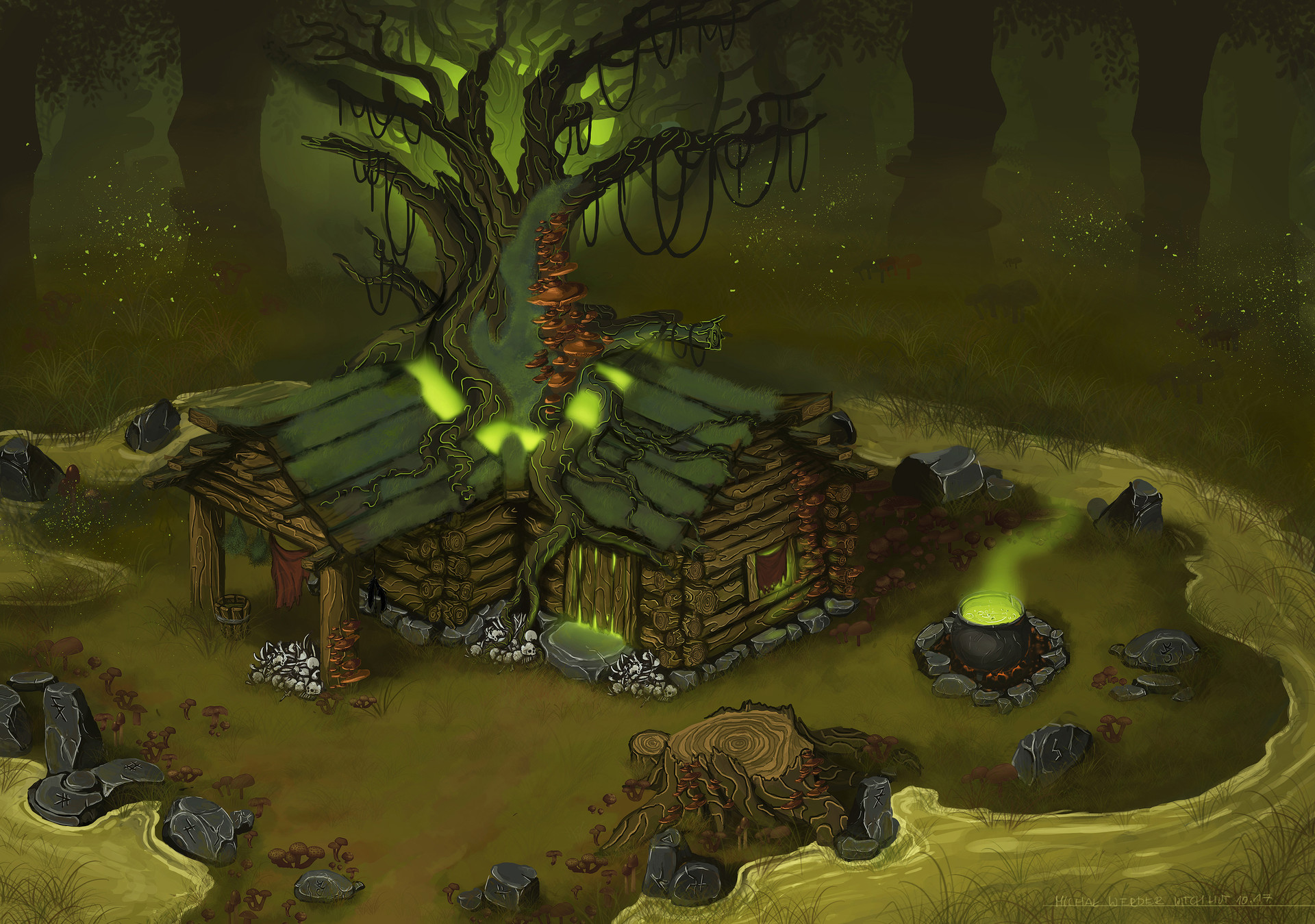 The players need to reach a nearby city. They can either use the pathway to get there spending some time in traffic or go through the fey-touched woods arriving two days earlier if everything goes as planned. The ranger decides to travel alone through the woods, splitting from the party while they travel by the pathway. The following minutes told two separate stories, split between both paths. I went first with the ranger, who went through some encounters while traveling through the forest, seeing dancing birds, squirrels moving through trees. It was right after that that he found himself with a hag. He had encountered this hag in a previous session long ago, so the ranger charged to attack her. The fighter went on until the ranger dealt the final blow, to which she started turning to sand while her cackle echoed around the forest. A bit weird, but nothing extremely strange so far, am I right?

Let’s continue with the story told from the other players’ perspective, who traveled through the road. At one point they heard a shout coming from the woods beside the road; a plead for help. After some discussion the player characters decided to go into the woods, only to fall into a hag coven’s trap. The three of the hags fought a great battle against the players, but one of the three hags was the one the ranger fought. During battle, it came the moment for the fighter to choose between going for the kill with the sea hag, or going for the other one (the one they did meet sessions ago) who was full on health. Of course, he decided to kill the sea hag, to which the other one polymorphed into a squirrel and left the battlefield, leaving no trace.

What happened? Did the second encounter actually happen before the one with the ranger? How could I as the DM know the second encounter would finish with the hag escaping to appear in the first one as one of the squirrels I described as a simple passing-by description? Did I mastermind everything to the point of predicting my players’ actions? As one of my favorite memes says “Well yes, but actually no“.

How did this happen then? First of all, take into account that this is nothing but an introduction to the solution I’m about to tell you. This specific example was just what sparked my idea for coming up with what I am going to talk about below. This previous example happened accidentally. I didn’t originally plan for the party to split, and only had the hag coven encounter planned out. When the ranger went on his own, I came with the plan of making the only and most important hag appear pretty much on the spot. I did describe the scenery before the battle, mentioning squirrel going through the trees (which at that time it was just plain environmental description). The battle goes on and the ranger ends victoriously. Now it was time for the rest to have their encounter, and I really didn’t want to change the whole encounter just because the ranger “killed her”, and I didn’t have time to think of a new one. That’s when I thought of having the hag survive the encounter with the ranger and battling the others. It made sense, didn’t it?

The second squad went on with the story, and the fighter came just to the moment I described above. I looked at the hag’s spells and saw polymorph. My mind instantly understood what I had to do and so did the “master plan” begin. This all would have happened before the ranger, and the hag would escape by turning herself into a squirrel. It all made sense! My players were astonished to find out that “I knew the battle would come up to that moment with the fighter, and the fighter would take that decision”. Of course I didn’t! But if they have fun thinking it happened that way, then so be it. Thus, a great moment in our campaign was born.

Pulp Fiction, another great movie to take inspiration from

How to do a session/number of sessions in this way?

All right, yeah, I am a genius, but you didn’t come to this post to read about how I convinced my players I am a seer. You want to see the process on how to do it in a “legal” way, and with more parts interconnecting one another. I thought the same thing, so I developed a way to do so. However, it is pretty difficult to carry out in a normal session, so I planned a way to do it by using one on one sessions. If you did read my previous article on how to create that style of game, you might have read I planned an Avengers-style story by having all player characters have their own sessions, meeting up by the end to fight against a bigger threat. That’s exactly what I recommend you should do to create these intertwined stories!

As I did recommend in the article I just talked about, going for a linear pick your path story is the best way. Decide which are the points in which the player needs to take an important choice and the repercussions it may have for taking it. Maybe the player character (let’s say a rogue) decides to stop a town hero from executing a ruffian in the middle of the street, gaining the town hero’s hatred. After that, the session might go on for that specific player with other important choices, but we are going to focus on that one I just told. Next session, a new player gets to play one on one with you, playing a sorcerer. We now know that the rogue set free the ruffian, so why not make that ruffian make an appearance again in the sorcerer story, while also having the town filled with “Wanted” signs with the face of the rogue character (obviously hanged by the town hero)? Do we want to keep intertwining this story even more? Both the sorcerer and the rogue found a tavern’s wall broken because you just gave it as a random description during their playthroughs. Let’s create a story around it! The next player to play one on one plays a war cleric, who fought alongside the town hero to catch the ruffian and broke the tavern’s wall in the process by throwing the ruffian against it.

We have our intertwined stories thought out, which you don’t even need to have thought from the beginning. A new intertwining point might come to mind after finishing one of the players’ sessions. But how can we make the cleric character throw the ruffian against the wall, breaking it? You will be forcing a situation there, which can be considered bad DMing as you are not leaving the player have a choice on the matter. As the tavern’s wall was broken before the rogue player ever got to play, we would be creating a session set in the past. Things just got difficult. Or did they? Let’s bring some level design to the table. We want the cleric’s session to be fun, just like we did with the rest. What’s more awesome than throwing a bad guy through a wall? We’ll have the cleric have to go to the tavern to speak with the town hero at some point in the session. The town hero will ask the cleric for help to catch a ruffian in the table near them. Let’s place some things in the room as well, and include an ogre sitting in one of the tables. If the player doesn’t come out with the idea of angering the ogre for it to hit the ruffian, then have the town hero suggest that to the player. There! You’ve got a great fun memorable encounter that also ties in with the story told in the other sessions. Even if the player doesn’t anger the ogre, you can have the town hero do it. If we convince the player to think that it was their idea, or the town’s hero one, then the cleric player won’t think you forced the encounter. If everything goes wrong, we can just skip that section, meaning it wasn’t the cleric who broke the wall, but some other thing that remains unknown, or left for some other player to break. 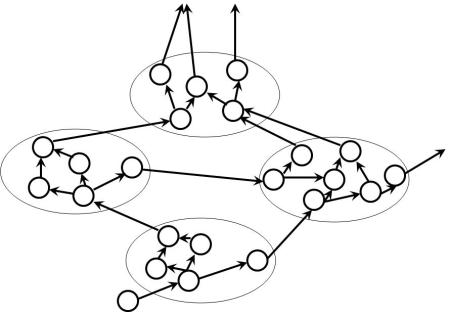 Imagine each encompassing oval being each a different session, with the circles representing the different encounters, and the arrows the decisions to take.

I would tell you about the second time I did this, but I might end up spoiling the game for my players if they were to read this. I pretty much did a similar thing to the one I mentioned in the example above. Can I create a simple “too long; didn’t read” version of all the tips I suggested? Of course I can. Here you have it:

These sorts of games are not for everyone as it is not extremely easy to pull out, but you may find it much easier to carry out that what you may have thought when you first began reading this article.  It may be a bit difficult, but in my case, it ended up having the players super engaged in the story (especially when I told each of them after each session that their story was influenced in some way by the previous players’ actions and that they would be doing the same to the following player). Force them to not tell the story out of character, and when their characters finally do meet up, you will be in for a great treat as they share their stories and how each decision affected other players’ choices.

Did you find this useful? Was it a bit confusing? Are you planning on carrying something like this out after reading it? Make sure to tell me everything about it in the comments below!

The campaign is about to start in a few days and one of your players hasn’t still come up with what to play? Let’s help them create one suited for the kind of characters they like to play! You can read how to do that in the following article: HERE