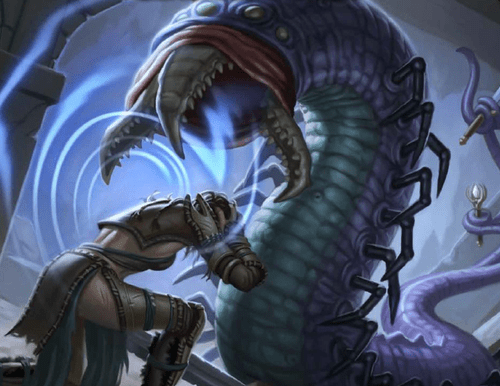 (Author’s note: I needed a break from the “tattoo” article and thought that this would present some interesting ideas.)

Psychic damage is one of the “flavors” of damage types in 5th edition D&D. But unlike most of the other types, it has a few unique qualities.

Because of this, maybe there’s a way of looking at it differently, as compared to other types of damage.

Before we continue, let’s define Hit Points. According to the PHB

Hit points represent a combination of physical and mental durability, the will to live, and luck.

However, despite this description I think that hit points should be divided up as follows: Into Hit Points and mental fortitude. Let’s use the following definitions instead:

Hit points represent a combination of physical durability, the ability of the body to withstand fatigue, skill in dodging blows, and luck

With these definitions, the character’s mental health, ability to problem solve, problems, accurately interpret and act on presented information, and social skills help.

How to Calculate Mental Fortitude

Another way of looking at mental fortitude is treating it as if it were a separate pool of HP, with the same hit dice the character’s class. Instead of adding constitution, it adds either the highest positive modifier of intelligence, wisdom, and charisma (and sanity, if used), or if the GM is feeling generous, any positive modifiers of all the following: intelligence, wisdom and charisma, (and sanity, if used). Just as before, negative modifiers don’t count. Unlike physical hit points, they don’t increase, except for if the modifier increases, representing how frail the mind is. Mental fortitude used as a separate pool of hit points recovers at 1 point per day, as ability damage does. Healing spells such as Restoration or more potent magics can recover these more quickly.

Characters with psionic powers probably have higher mental fortitude than others, however.

How Mental Fortitude is Used

Mental fortitude is used as a bonus to the saving throws whenever psychic damage is dealt, which makes it easy to calculate.

Furthermore, with it could grant a bonus to characters that are proficient with diplomacy.

It might even grant a bonus to social situations where the character(s) in question may “lose face,” i.e. social status.

The following spells and class abilities cause psychic damage

Some other ideas for protection

Maybe wearing metal headgear can give a bonus to mental fortitude. That may be why Professor X has trouble reaching Magneto and Juggernaut’s minds. The bonus would be greater if the headgear were magical as well.

You can wear the item Ring of Psychic Resistance

Monk at 18th level can be immune to psychic damage for 1 minute per time he uses his Empty Body class technique.

Goblins from Plane Shift: Zendikar get resistance to fire and psychic as a racial ability.

Despite the fact that hit points are a coverall for all damage, this author can’t see the logic in them dealing with mental attacks, especially if there are other alternatives. This is a homebrew idea you might want to think about incorporating into your games