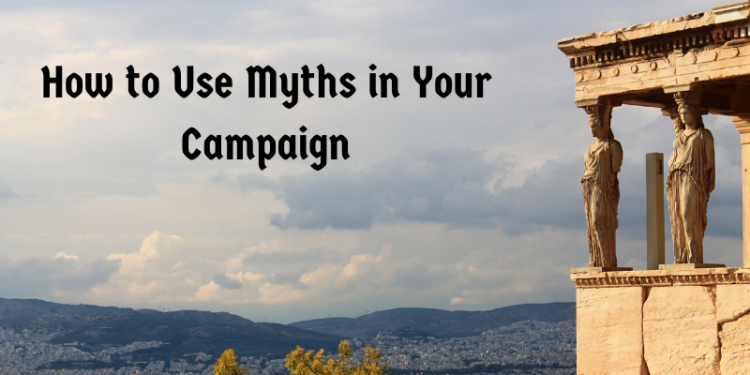 One of my favorite aspects of world-building for a campaign is crafting a pantheon of gods and weaving myths together with visions of my players being enthralled by my epic tellings of how the world was ordered.

Of course, the reality often is that the myth gets stuck in a world guide and barely mentioned in the campaign. So, how do you incorporate myths into your campaign? Let’s take a look at some ways we can incorporate myths in our games without boring the players.

What In-Game Myths Should Do

Any myths — which we are defining as legendary stories involving gods, demons, and heroes from the distant past — in the campaign should be there to further the story you are working to tell. At a minimum they should:

Basically, keep your players foremost in your mind when creating your myths. After all, you’re doing this to enhance play at the table. By doing so, you can make it easier for yourself as the DM to incorporate the myths into your world. You can also create a greater sense of realism, and give the players an opportunity to interact with and change the world through their actions.

Any myth that you introduce is a gift of storytelling that you can build a whole adventure around. Perhaps a myth tells of a fierce warrior goddess who is struck down by a demon, but not before defeating it with one last act of valor. Now her weapon is rumored to be deep beneath a local mountain.

Myths like these, or even cosmological myths that explain why the world is how it is can be the set up for an entire adventure. Legendary villains could rise from the distant path, and our players now have to finish the story.

When building your myths, think about how you might be able to incorporate them into your campaign. It could be prudent to sketch out a few possible plot points that could arise from your myths.

As much as you can, connect your myths to your players. While this is pretty easy to do with clerics, paladins, and other religious characters, you can do this with any character.

Perhaps you have a rogue whose backstory includes a life of crime before reforming and joining the party. Their past exploits may be attracted the attention of a trickster god who has many myths of bargains struck with thieves, or choosing them as their champion.

By keeping your characters as the focus of your myths (even obliquely), you help integrate them more into the world. Of course, not every myth needs to be about the characters, but by starting with myths that support your player’s backstories, or present a solution for their main hopes & dreams, they are more likely to be used and enjoyed by the players.

You can then use these myths to help characters change over the course of the campaign. Perhaps meeting their god leaves a cleric with a crisis of faith when they realize that the god is just as fallible as mortals. Or in a more epic campaign, your characters may have the opportunity to become divine themselves, and the legends of their exploits become myths and religions told by people in the campaign world.

Not every myth must be directly connected to a character. Some can be used to enforce themes that you are wanting to explore in the campaign. I like choosing a couple of themes when writing a campaign, as they help generate ideas when thinking about the next adventure. Themes also help focus the characters the players create and give them a sense of what questions will be asked during the campaign.

Myths in-game can be used to highlight these themes, or even to introduce them. If one theme is exploring what it means to be part of an in-group, the players might hear a bard singing about a legend of how the gods settled the world through the wisdom of an outsider.

Myths are powerful and by weaving them into your campaign, you flesh out the world and give more opportunities for player engagement. You can even have your myth-building be a collaborative endeavor with your players creating their own myths to help build out the world.

What myths have you used? Tell me about them below!

Monthly Encounter #11: Of Giants and Dragons ...