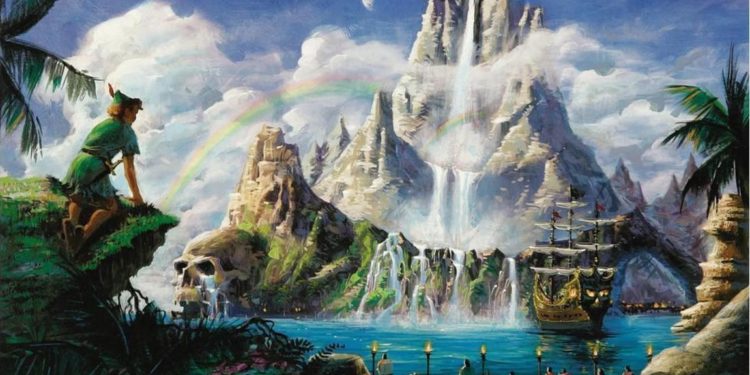 Thumbnail Art from concept art of the Neverland Theme Park

Last week I’ve got the pleasure of being gifted Neverland – The Impossible Island by a friend of its creator (props to @LaTiaJacquise for being awesome). Being this her first product on the DMsGuild I wanted to spread the word a bit. You can certainly see a lot of love and passion poured into the product, and I must say I do quite like it.

Neverland is a short product, but only being at $3.50 (and right now at $2.63 with the July sales) makes it totally worth the price. I would not be writing a First Thoughts article if I didn’t like the product, so let’s get to what I think of it:

To start up with, it never came to my mind that Peter Pan was actually a book, so when I read the first sentence in the product indicating it is inspired on it, it caught me by surprise (but, of course, why wouldn’t it? It makes total sense). So, as you can imagine, I haven’t read the original book, meaning I only know of this world from the many ports to the big screen.

I didn’t know of Diana Gaeta (the author) before reading this. Now that I’ve given a quick glance at what this book is about, I look forward to reading more from her. You can read in the introduction section this is a work out of passion intended to be used mostly for D&D, but applicable to pretty much any roleplaying game you would like to use it with.

With only 26 pages there are not whole pages of descriptions for everything. However, I found these descriptions to be just enough to have full knowledge of what this world is about, how it is intended to be played, as well as to inspire GMs enough to create your own things. To start with, Diana made sure to indicate that she created this product with the intention of having the player characters be adults, not kids. Violence to kids isn’t intended to be portrayed when using it. This means Peter Pan, as well as the Lost Ones are grown-ups, which can create some very interesting stories. How long have they been in this world in your story? Did they ever get out of Neverland, only to return later in life?

Many of the places that appear in here I remember being a big part in the movies. The Lost Camp and Skull Rock were classics. Nevertheless, even though I remember hearing about Cannibal Cove in them I can’t recall if it ever appears in the movies. There are some others that I’m pretty sure didn’t ever appear in the big screen. Some googling didn’t give any result, so they either are pretty obscure locations that only appear in the book or they are places that were created to fill in the world. Either way, they do sound interesting from what I’ve glanced! If there’s one thing I would have liked seeing is easy to find adventure hooks tied to the locations (as in bullet points), but there are still some great ideas in each of them.

One thing I need to praise is the lore created for this world. It is obviously tied to the Fey realm, but it is the way Diana created to access this world that I liked the most. There’s also the mystical aspect of it, meaning that you can use this world as a place your player characters can wake up one day in and try to find a way out. I would love to use it as some kind of prison some archfey uses for those mortals who bother them. If the PCs don’t escape in 12 days they’ll be trapped in the world for the next 1000 years without aging! 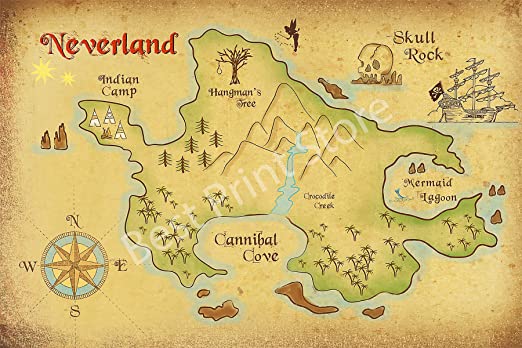 Neverland Map being sold on Amazon

Believe it or not, there are factions in this world as well. When one thinks of Neverland they would think of the Lost Ones and the Pirates. However, there are many more making this little world look like a living place. It seems Peter Pan’s existence and mentality split the Lost Ones into subgroups. I can imagine particularly interesting confrontations between them. As with many of the settings, these factions work best for certain classes than others. I personally like the Mothers‘ faction the most, as I love the concept behind them.

A nice thing that is specified as well is that this product knows there were many racist stereotypes used in the original book and movies. These are not used at all in the product as it is stated in the introduction. To fill the void they leave, there are these factions I just talked about. There’s pretty much one for every opinion one could have for the Neverlands. Do you want to immediately escape? Do you think following Pan’s decisions will only lead to chaos and destruction? There’s one faction for you!

If you know me you know I love monster sections in books. They not only are new creatures to add to your game but they usually have some lore with them that can easily be used as adventure hooks. This book’s monster section is no different. What’s more, there’s a new kind of “monster type” called Figments. I won’t go into detail, but if you thought that making a critter giant is scary the stat blocks and tables to create new figments might surprise you with the monstrous entities you can create out of them. There’s quite a lot you can make with them. Something that did surprise me is that there is no CR in the stat blocks. I’m not sure if this was intentional or not, but having used them for such a long time to have a general idea on how many of the creatures to put against the players it feels weird not to have them. I do however understand that most of the time they aren’t useful and work more as a guideline. I believe the author went with that thought by removing them.

Finally, there are the characters we well know and love. I personally like the way Peter Pan is portrayed in this product. He/She/They is an agent of pure chaos. Additionally, we have the pirates, who are statted as undead. That sounds a bit weird, but now that I’ve read it I can’t get the idea of having Captain Hook look like Captain Barbosa from the first Pirates from the Caribbean movie when shone by moonlight out of my mind, and I’m all for it. Fairies do have an important role in this world as well, and thus we have Tinkerbell statted as well. Last but not least, all NPCs statted in the book come with their own pronouns in the stat block, which is something that by this point I can’t understand why it hasn’t been officially done in D&D books. 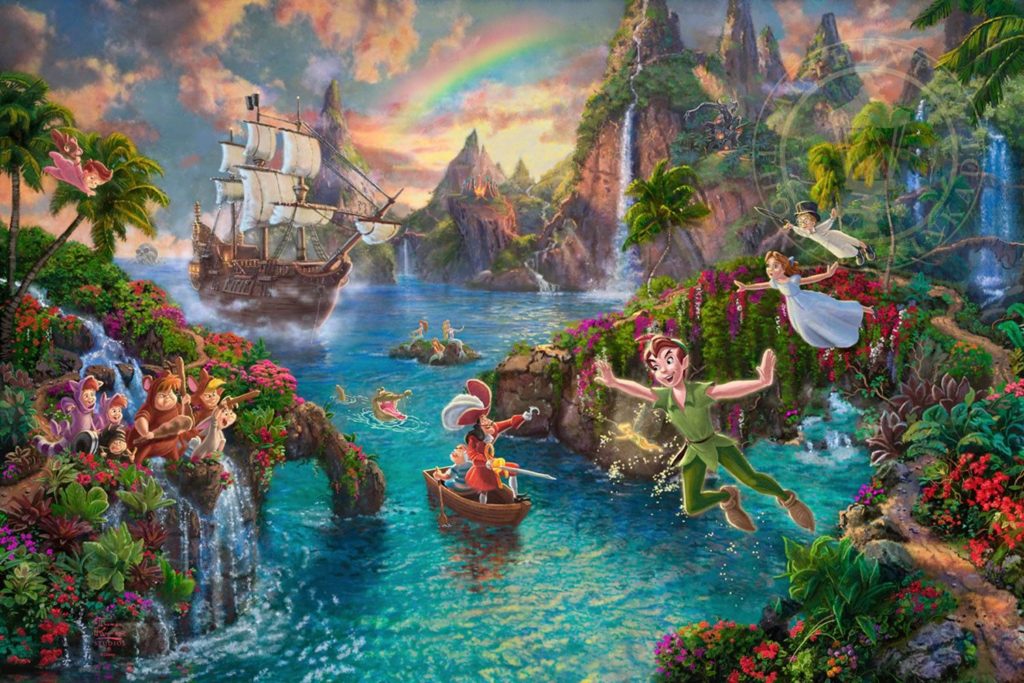 Even though I can’t imagine a campaign going on for numerous levels in this world I can perfectly see it as a setting for short campaigns, as a section to go through in some longer campaign or as somewhere to do one-shots in. If you are not up to all those things, you can get it for the ideas it has that you can steal for your game. Just because of the whole story behind it, all the content added in, and its small price, I completely recommend you give this product a try. If Peter Pan’s story fills you with nostalgia and/or you have always loved it when growing up, then this book for its low price is a no brainer! As this was not enough, this setting guide has raised $600 to the Native American Rights Fund (NARF) and $200 to various Bail Funds across the US, making it well worth your money.

The product does come with a guide on how to make characters that are more tied to the setting as well as a short lvls 1-3 adventure. It does seem particularly interesting and makes good use of the things included in the book from what I’ve seen. You can get Neverland – The Impossible Island by entering the link below:

GET NEVERLAND – THE IMPOSSIBLE ISLAND