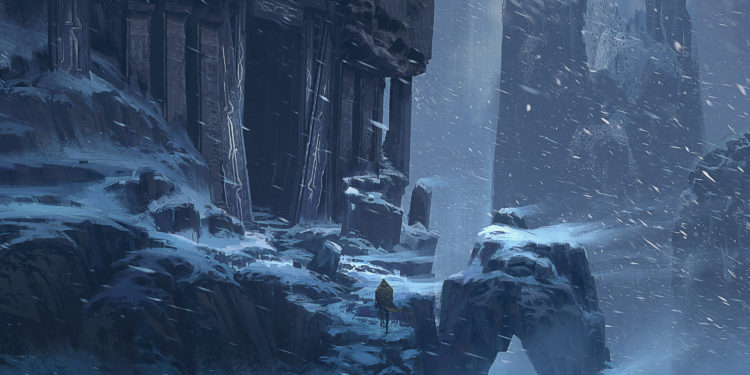 After a disgraceful retreat from a fight against a small army from High Lakeview (a small town in an arctic mountain region), a roc took the near mountains as their domain. It knows now not to confront the town again and so looks for people foolish enough to wander few in numbers in the nearby zone.

In order to reach High Lakeview, you need to take the path surrounds this mountainous region. The rumor that the small town managed to drive away a fearsome roc has reached many other villages and cities, but none of them specify where the roc escaped to. It is in that same mountain where a family of yetis live. While most people consider them a boogeyman’s tale, the yetis treat the mountain as their home and have taken refuge from the roc in a cavern complex. 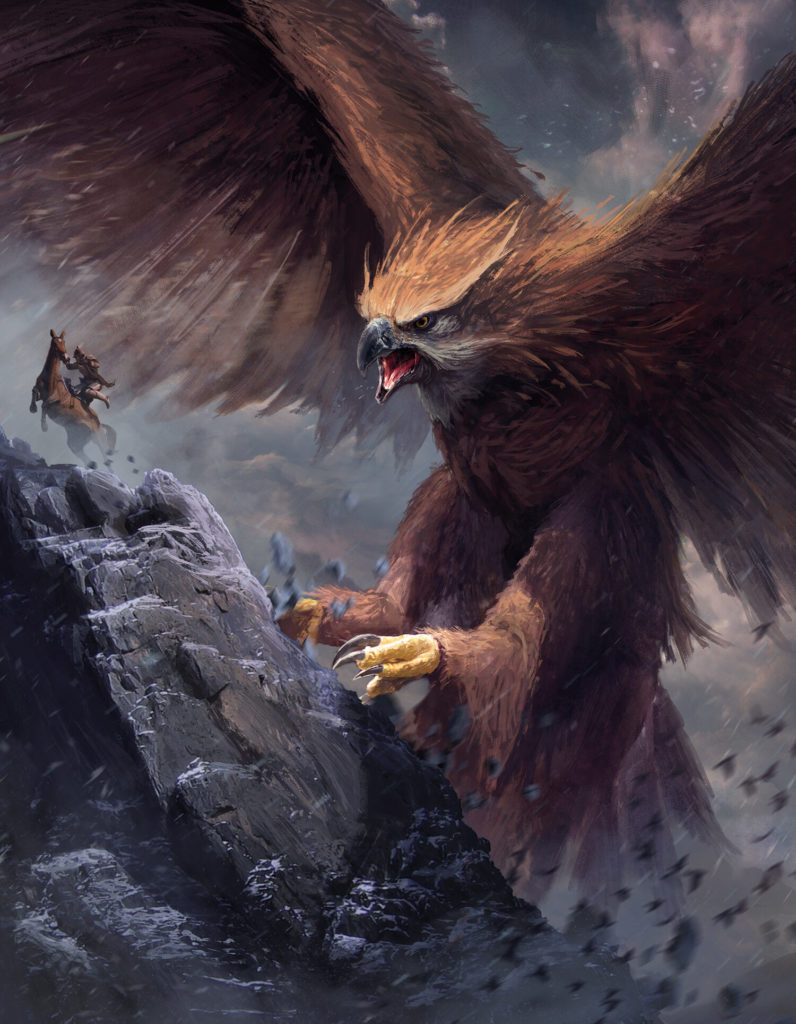 When traveling to High Lakeview the PCs need to walk through a  path surrounding some mountains. Read aloud the following text:

The path before you is completely filled with snow, making each step feel like a slog. The place you are trying to reach shouldn’t be that far from here. That’s when it begins to snowfall.

The snowy path the PCs are traveling through is considered difficult terrain. The heavy snowfall makes Wisdom (Perception) checks to be rolled at disadvantage.

After 2 hours of walking, a DC14 Wisdom (Perception) check reveals a blood-covered battleax partly hidden in the snow. Upon closer inspection and with a DC15 Wisdom (Insight) or Intelligence (Investigation) check one may understand that this weapon was not hidden but dropped by its attacked wielder. A DC13 Wisdom (Medicine) check reveals that the blood on the battleax is not from a humanoid individual. No matter if the PCs managed or not to find and inspect the ax, read the following text afterward:

A creaking noise resonates around the mountain making some snow fall particles drop from the mountain that has remained on your left for the past hours. A sudden shadow appears on the north in the sky, a silhouette of a bird. As time continues the shadow keeps growing in size indicating it is no normal bird, as if approaching at high speed. 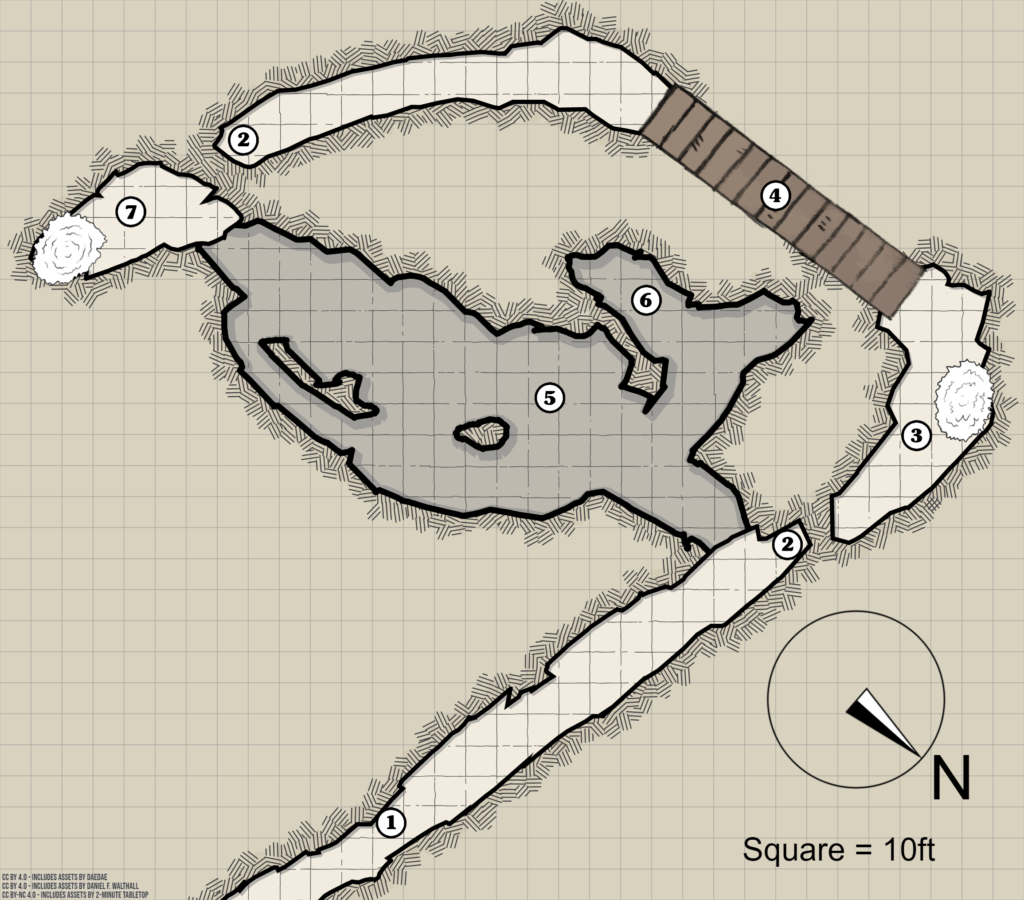 The bloodied ax is found here covered in snow. No footprints nor trace can be seen nearby due to the snowfall.

The path ahead is broken. A 5ft long-jump is all that is needed to reach to the continuing path. The PCs must make a DC10 Strength (Athletics) check to accomplish it or fall 300ft into solid ground.

A dead bush is located by the side that can be used as cover. A human corpse is located by the side. A DC16 Wisdom (Medicine) check reveals this human died from hypothermia. It is wearing a +1 half-plate armor in perfect state and contains a full set of climbing gear in its backpack, as well as 30gp. Use the doff rules from the PHB (p146) to remove the armor from the corpse.

The bridge appears to have been unkept for a long time. A DC14 Intelligence (Investigation) or Intelligence (Carpenter’s Tools) indicates that the bridge won’t support more than 150 pounds without breaking. There is a 300ft fall below leading to a frozen lake.

A DC12 Wisdom (Perception) check allows the characters to hear the sound of something piercing ice. 3 yetis can be found asleep in it, as well as half-eaten parts of different past individuals that dared cross this cavern. The walls are made out of translucid ice and there is no light source to be seen. The ceiling is covered with thousands of little stalactites. If dropped, they deal 3d8 damage to all creatures beneath them.

An abominable yeti is here attempting to eat a block of ice. The piercing noise is made by its attempts to break it. Due to the translucid ice walls, the abominable yeti can be seen from room 5. A great stalactite is located on the entrance to this place, which can be easily dropped. The abominable yeti lasts 2d6 turns in breaking through it.

The 800ft long slope to reach the bottom of the mountain is fully covered in snow. Besides the cavern exit, a pine is rooted. At the base of the slope lies High Lakeview’s side entrance.

If the players decide to use something like a sled, ski, or snowboard, the vehicle can achieve a maximum speed of 120ft per turn allowing the PCs to attack but at disadvantage due to the fast movement.