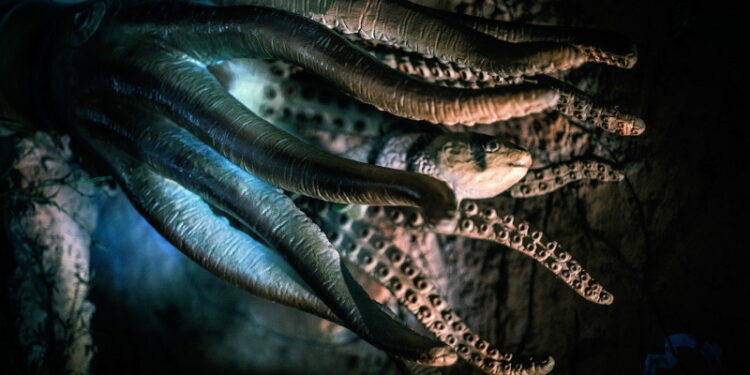 Here’s another thing I’m working on for Under the Seas of Vodari. It’s inspired by the same ideas as a roguish archetype I posted in Harbinger of Doom almost five years ago, but I’ve reworked the flavor text to fit aquatic peoples of Vodari, and very few words of the mechanics have survived into this version.

The tradition of the Midnight Masks comes from rogues borrowing the visages of the unsettling creatures found in the deepest parts of the ocean, including fish and the monsters of Dokahi’s brood. They craft or alter masks, which they wear into battle; the terrors that they bind to these masks gives them great power over the fears of their allies and enemies – even enemies who are hardened against dread.

At its founding, the Midnight Masks believed they were bearers of holy dread, reminding people to seek solace from the gods. It was all too easy for corruption to seep into their ranks, as they exulted in the fear and deference of the masses. Nowadays, few aspire to any sort of greater cause.

The Mask of Horrors

You craft or modify a mask, according to the secret lore of the Midnight Masks. If your mask is lost or destroyed, you can create a new one the next time you finish a long rest.

As a bonus action while you are wearing your mask, you can force one creature that can see you to roll a Wisdom saving throw (DC 8 + your Charisma modifier + your proficiency bonus). On a failure, the creature is frightened of you until the beginning of your next turn. You can use this ability a number of times equal to your proficiency bonus, and regain all expended uses when you finish a short or long rest.

Eyes of the Nightmare

As an action, you can see through your mask’s eyes instead of your own for 10 minutes, as long as it is within 1 mile. This vision benefits from any blindsight, blindsense, darkvision, or truesight that you have. If you have the blinded condition, you can see normally through the mask’s eyes.

You can cast fear without expending a spell slot (DC 8 + your Charisma modifier + your proficiency bonus). You can use this feature once, and regain the ability to do so when you finish a long rest, or when a creature that is currently frightened of you falls to 0 hit points.

Sidebar: Eyes of the Nightmare for Blind Characters

If your character is permanently blind, regardless of reason, we suggest making the ability to see through the mask’s eyes a 3rd-level feature, and permanently active.

You can cast dream without expending a spell slot, targeting one creature that has previously been frightened of you. You can use this feature once, and regain the ability to do so when you finish a long rest. If you use the damaging version of this spell, you can roll your Sneak Attack dice and add the result to the damage dealt.

Many thanks to Shawn for helping me get this into its current shape – though I have no illusions that this is its final form. As the Harbinger of Doom post says, a major NPC from the Dust to Dust LARP inspired a lot of this; that character was written and primarily portrayed by Colin McLaughlin.

Dread Pursuit is one way to handle the slasher-movie trope of the victim running as fast as they can while the slasher always seems to stay close by.