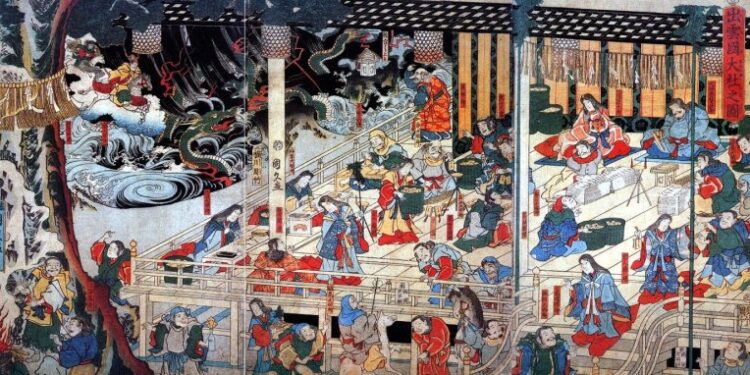 Welcome back to the world of STORM EDGE: THE ADVENTURES IN EIGHT ISLES! This week, we are continuing to learn more about the Gods of The Eight Isles. (For part 1 – go here)

Celestial Nobles consist of the gods that descended from Juggernauts that do not belong in the major groupings of Dragons, Giants, Primordial or Fey, as well as the mortals who has ascended to Godhood. They look most like humanity and serve in the court of their respective ancestral Juggernauts, though some of these gods (Greater to Intermediate gods mostly) do go off on their own forming their own circles called Divine Collective. Nigi-Midayus ranks high among them. These are the gods that gets most involved in material planes. Here are some examples: 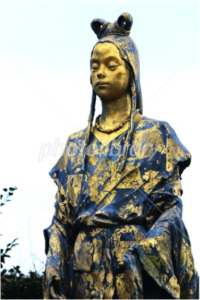 NIGI-MIDAYUS: Prince of Light. A grandsons of Materu-Aki and progenitor of Angel Emperors, this former Solar has ascended to godhood after bringing about Great Harmony. This brilliant Greater Deity watches over The Eight Isles from his mother’s court in the Heavenly Field of Takamahara.

SAKUNA: Princess of Flowers. Former witch queen has ascended to godhood along with her husband after the Great Harmony. This lovely Greater Deity presides over blooming of flowers and volcanic eruption, from the ashes of which new trees emerge.

IKANA-OM: God of Knowledge. One of the older gods of celestial courts, Ikana-Om is said to have the direct connection to Over Deity and holds power to know everything. Even other gods come to this wise Greater Deity for advices in time of trouble and strife.

MALA-HITO: God of Forge and Lust. This one-eyed god resides in volcanic lair where he works to create divine artifacts and items of great powers. This helpful Intermediate Deity is also known to be very lustful and have sired number of quasi-deities, especially among his Dwarven worshippers.

YAHA-KUVERAN: God of Warriors. Yaha-Kuveran is a former Angel Emperor who ascended to godhood after death. This brave Intermediate Deity was known for the skills in archery and martial prowess. Many samurai and warriors, especially of elven descent, worships this deity.

IBISU: God of Luck and Transiency. Ibisu is said to have come from the sea bringing knowledge and good fortune and have helped early settlers. Some says that this crafty Intermediate God is the reincarnation of the Devine Pair’s first born who were unable to walk and cast out in the sea. 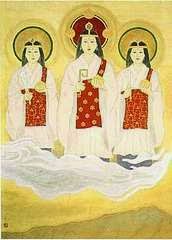 KHANGISHA: God of Transition. Khagisha is the elephant headed son of Brahmindra who preside over transitioning from one state to other. This jolly Greater Deity sits high among Lotus Wheel’s court and known to help travelers and those in between realms. Worshipped by many Halflings.

MYTRONA: God of Guidance. Mytrona is said to appear to populace’s dreams wrapped in light, shining the path the fate decreed. This serene Greater Deity holds the vast knowledge of inner workings of the Weave and bestowed its knowledge to many wizards.

SEORITSU: Goddess of Tides and Fate. Seoritsu is said to have three faces of maiden, matron and crone with lower body that of a dragon. This far seeing Greater Deity is a goddess that is somewhere between Giants and Dragon and in a way the closest to Eula in their mysterious powers.

To lean about the Giant Lords and other Giants, go here.

To lean about the High Dragons and other Dragons, go here.

Existence of Primordials & Elementals forces predates the Divine Pair and creation of material plane. However, it was Eula that gave them characteristics and Izagi that gave them directions to aid them in creating material world. In process they have become very close to Dragons and Horned Giants, bestowing many of their power for them to exercise in material plane. These Intermediate Deities exist more as raw manifestations of natural forces and as such they do not work through any clerics. However, they do often bestow gifts to their worshippers, if they are feeling generous. 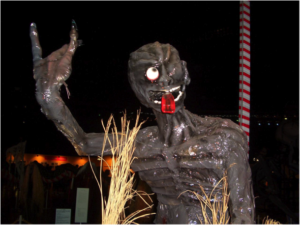 RUDNI: The divine embodiment of raging wind and whispering breeze, Rudni is often called crier and shouter. As the Queen of Air, she works most closely with Susano and Kazuchi to carry out their biddings. She allies with Eguni while she holds Bhumon in contempt.

BHUMON: The divine embodiment of metals, rocks and tough minerals that hide treasures in their depth, Bhumon represents stability and unchangeable nature of earth. He has great affinity with Mahisumba and Kuyami, this Chief of Earth allies with Viruna while consider Rudni to be a foe.

VIRUNA: The divine embodiment of water that flows through lands in heights and depths, Viruna as the King of Water represents the ever-moving body of water, be it sea, lake or river. He carries out deeds of Pairava and Wadatsu and allies with Bhumon while hold enmity to Eguni. 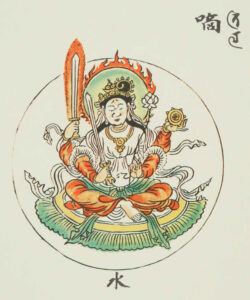 EGUNI: The divine embodiment of flames that provides illumination and warmth as well as cause destruction and rebirth, Eguni represents the aspects of fire that purify as well as revitalize. Often serving as agents of Achala or Yagiha, this Lord of Flame allies with Rudni and fights Viruna.

SOMA: The divine embodiment of life force everywhere, Soma represents the central life source that fuels everything. As the Lord of Life, she often serves Mazuna or Gundali and while she is in harmony with all elemental forces, she is most vehemently against any undead, unnatural forces.

Below table shows the list of deities described above with their alignments, domain and symbols.

Continue to Part 3 from here.