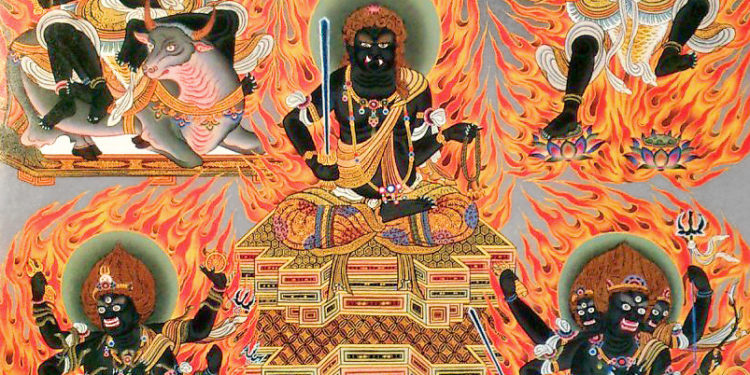 Welcome back to the world of STORM EDGE: THE ADVENTURES IN EIGHT ISLES! Last week we have introduced KIJIN, the descendants of the Great Horned Giants. This week we will be talking about how Giants are different in The Eight Isles and surrounding areas.

Giants of The Eight Isles, commonly called Horn Giants, have their origins in the mainland continent where many of them still revered as protective deities in the Lotus Wheel pantheon. Like the Giants of the west, Giants in The Eight Isles are bound to their strict hierarchy, but unlike their western counterparts, these beings of terrible powers have horns and sometimes extra limbs, eyes and even heads. Like their western counterparts, these Giants use runes and weapons imbued with magical powers rivaling that of dragons. Giants of The Eight Isles tend to be Lawful and most of them were Good at first. Many of them have been corrupted by rage and grief, turning them Evil, even Chaotic, but hardly ever Neutral. 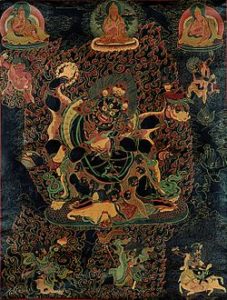 Giant Hierarchies in The Eight Isles

Unlike their western counterparts, Horned Giants of The Eight Isles (and of Easter World) are ranked based on their powers and deeds. Generally, the more horns they have, the greater their powers though the size of the horns factor in as well. Many Horned Giants of upper rank work with Celestial forces, especially Devas, to defeat Infernal and Abyssal forces.

Here are the ranks of the horned giants:

Wise Kings of the Horned Giants that have achieved God-hood. These ranks of the Giants rarely interact with those in the material plane but they do answer prayers and give powers to those they deem worthy. Most of them reside in the Celestial planes of Celestia or Arcadia but some reside close to the material plane in Shadowfell in order to save those with a chance for redemption.

These noble ranks of Giants are in training to reach godhood. As such, they tend to live in the material plane to help the little ones. They are the ones that steward mountains in The Eight Isles and give assistance to those who come to seek them. A small number of them are considered living deities and as powerful as the Vidya-Rajas.

Generals and protectors of natural order under the higher ranks of the Giants, these ranks of Horned Giants are usually engaged in unseen battles with the Oni forces. They have some specialized magical abilities associated with the natural forces they preside over but they rely on their physical strength and weapons just as much.

These are the Horned Giant equivalent of commoners. Still more powerful than most humanoids and highly intelligent, though a lot of Oni come from this class of Horned Giants. They generally engage in labor and often mingle with humans, participating in artistic and commercial endeavors.  Sometime they even befriend and serve powerful druids. 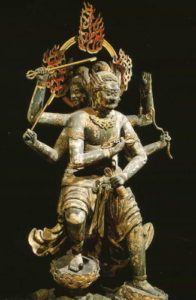 Giant Types of The Eight Isles

All Horned Giants of The Eight Isles trace their lineage to Daidaara the Prism Giant, a primordial spirit giant that is said to still walk the earth at night.  The different types of Giants were born from the different shades and aspects cast from this original giant. Unlike their western counterparts, their types do not determine their hierarchy. They are all intelligent beings of powerful magic and shapeshifting abilities (generally manifested in Harmonious and Raging Aspects) that often take on human or animal shapes. There are largely five types of Horned Giants that exist in The Eight Isles.

Most common among the Horned Giants and some of the highest regarded. Also known as Guardians, these Giants tend to use purifying flame and binding magic to ward evil away from the world.  Unlike other Giants, Carmine Giants tend to have just one face, two eyes and two limbs (though there are some exceptions). Red Oni of Avarice originated from this Giant type.

Second most common after the Carmine Giants, these many-headed and many-armed giants are known for their strength and martial prowess.  They mainly use their rune scribed weapons to overwhelm and bring down their enemies, which could include gods or anyone who has rebelled against the righteous order (including other giants). Though most aggressive of the Giants, they tend to put great importance on fraternity and camaraderie.  Blue Oni of Malice originate from this Giant type.

Sometimes known as Ochre Giants, these sensual and gender-fluid Horned Giants are the most fertile of the Giant-kind and thus have produced more Goliath descendants than the other types. Often appearing as pythons and employing soft methods of healing and water-based purification magic, these long-living Giants tend to be popular among humans and are even known to cohort with Immortal Sages. Yellow Oni of Obsession originate from this Giant type.

Known as the Watchers, these Horned Giants are as fierce as Cobalt Giants, though they employ more psychological magic to bring terror to their enemies’ hearts. They tend to have the most heads, eyes, and limbs among the Giants and sometime have more than one set of legs. Often employing (or appearing as) hoofed animals as their mounts or messengers, these giants are truly fearsome warriors when angered. Green Oni of Depression originate from this Giant type.

Also known as Path Makers, these giants are known to use lightning and radiant magical powers to destroy any obstacles in their way. These Giants are full of shimmering brilliance and they tend to possess a greater number of eyes than other Giants, which shine like brilliant stars. Though least common among the Giants, they have some of the most powerful amongst their numbers. Black Oni of Doubt originate from this Giant type.

The ones among Horned Giants that have reached the godly status of Vidya Raja. They embody the ideals of each of their type and strive to bring others to their levels. Here are the Five Zeniths currently at the top of their respective hierarchies.

ACHALA: Known as the Immovable and the Guardian of Center, Achara holds a special place among all giant kind as one of the most powerful and fierce protectors of all that is good in the world. Achara rule over Carmine Giants and count many Rajas and Satvas under his command.

MAHISUMBA: The four-headed, four-armed martial ruler of Cobalt Giants, Mahisumba is known as the Conqueror of Three Thousand Worlds. No one, even gods could withstand against his martial prowess once this Guardian of East is in his warpath.

GUNDALI: This one-headed, eight-armed, three-eyed hermaphrodite Guardian of South prefer to live in peace in Arcadia with Immortal Sages. However, those who dare to cross threshold of life into unlife will witness the serpentine wrath of this ancient ruler of Alabaster Giants.

PAIRAVA: One of the most ferocious Horned Giants, this six-faced, Six-armed and six-legged ruler of Malachite Giants and Guardian of West is known for his oxen defiance, even against death itself. Ever vigilant, this Horned Giant Lord can be a cause of great strife if led astray.

NAMJIN: Since Susano the Six-Horned Storm God is technically above the Five Zeniths as he is the first born of Daidaara and thus belongs to Juggernaut class, this wise Dark Prince holds the mantle as the ruler of the Obsidian Giants and Guardian of North. He is also the leader of Seven Lucky Gods. 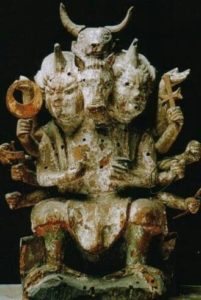 Giant-kin of The Eight Isles

Most of the Giant-kin in The Eight Isles do not possess horns, with the notable exception of Cyclops, who tend to have one horn to go with one eye, and who possess great powers, and Firbolgs, who have little ancestral bumps where their horns used to be. As noted previously, having horns denotes the possession of greater powers amongst the Giants. Thus Ogres (who are mostly employed under Oni), Trolls, and Formorian with their deformed horns are held in low regard amongst the Giants. Also, there are a few Giant-related creatures in The Eight Isles that are not seen elsewhere, such as Mud Giants and Beast-headed Giants.

Oni are the corrupted form of the Horned Giants, mostly from Yaksa-Pusan rank but sometimes from some of the higher ranks. Powerful and intelligent, yet trapped by negative emotions and confined within Shadowfell in the aftermath of The Great Harmony, Oni are always scheming a return to the surface world. Though usually evil, some Oni can be turned to Good to return to the ranks of good Giant-kind. It is said that someday the Storm King Susano and his Dark Prince Namjin will return to their cause and rise in arms in the final battle against the Dragons who have taken over the land under the sun.