XP for Gold: How it Actually Works 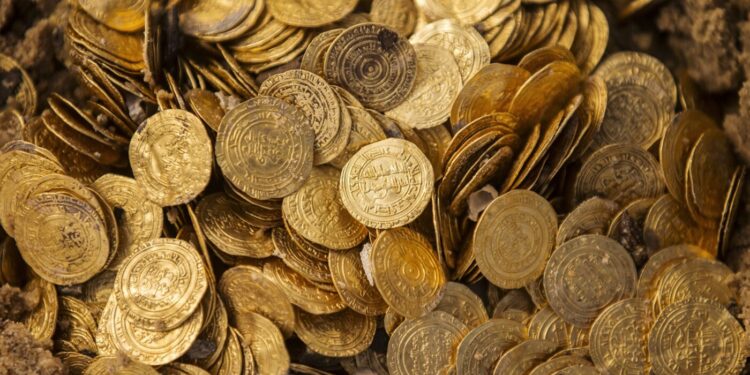 Here’s a guest post by Wyatt Billingsley looking at how to use XP for Gold in your game.

In the first edition of Dungeons and Dragons, players could acquire experience points from collecting treasure, and when I first heard of this I instantly fell in love with the idea. It looked like an easy way to instill some more inherent value to non-magical treasure, as well as ensure non-combat focused players always had a way of getting experience. The thing is that there are a number of reasons why this system is not currently part of regular games of D&D, many of which I had to learn the hard way after I added this system to one of my games and it nearly tore my friend group apart.

Before I explain what happened though, let’s talk about how the XP (or EP as it was called at the time) for gold system works. Unlike a lot of things from earlier editions of Dungeons and Dragons, this method for collecting experience was generally as simple as it sounds. As long as your party was exploring a dungeon of a CR rating equal to your level you gained experience points equal to the value of the treasure that you collected. The system got a little complicated if you were going into a dungeon that had a rating lower than your level. There is a particular formula that had to be applied to keep players from trying to grind the same low level encounters over and over again. However because this same formula wasn’t applied to dungeons that were a higher level, it meant that as long as you were always on the lookout for a proper challenge, the XP system was very simple.

Again as a DM I thought that this was brilliant. One of the biggest problems in my games is finding a natural way to motivate and reward my players that doesn’t involve magic items. As it stands, gold only really has value to players if they know what to buy and home much things cost, or if the player has built some excessive greed into their character’s backstory. Outside those new players, or even just casual players, tend to not care all that much about shopping. The alternative method available for player motivation is magic items, but too many of those and soon the party becomes rather dramatically overpowered. An XP for gold system solves this, as there is nothing players want more than to see their hero fulfill their personal growth into the demi-god they were always meant to be. It creates a motivator that is natural and also strong enough to create some organic conflict in how the players perform their roleplay. I could have a player who rolled a half-orc monk who has sworn off all earthly desires, but at the end of the day a twenty is a twenty.

So naturally thinking this was the greatest thing in the world I implemented this system into one of my games. We were playing Dungeon of the Mad Mage, which I thought was the perfect place to try this out. If you are unfamiliar with the module, it is basically just a giant dungeon crawl, and the book tells you exactly what level the players should be when at each part of the dungeon. So I would know exactly how much gold they needed to get on every level.

I should note I did some homebrew tweaking of this system for simplicity’s sake. For one, to make sure my players weren’t carrying around 6,500gp each by level five, I decreased the XP level requirements by a factor of ten. So to get to level 5 they had to find 650gp instead of 6500gp. Also I tweaked the cost of some of the items in game to go along with the amount of gold they picked up. However, things like components stayed the same. All in all this worked out for the first few levels, but after a while I ran into some of the same problems that Gary Gygax had when he was building first edition.

Originally the XP for gold system was implemented so that D&D games would take on the trajectory of a Tolkien book. The players would start off in a fellowship type party going after some small-time quests, but as the game progressed so would the scale, and by the later levels players were supposed to be managing an army and preparing for war like at the end of the Hobbit. The problem with this is that while it sounds cool, the thrills of kingdom management are not nearly as interesting as typical dungeon crawling. So players of first edition typically refused to settle down, and generally ended up hoarding huge sums of gold. DM’s would try to counter this with a variety of methods from costly training regimens to taxes, but none of them work. I knew this would be a problem for me also, and I may have thought of a few ways to deal with it in the beginning. However by the time we got to that point the screwy in-game economy was the least of my problems.

See I had been right in guessing that tying in gold to XP would increase the inherent value of gold, but I had underestimated how drastic that increase would be. Suddenly my collection of casual adventurers turned into a gang of hardcore treasure hunters. Every corpse was looted for treasure, and every monster was dissected for potential valuable anatomy. Undermountain has never been more thoroughly raided. The thing is they continued to do this even after they found the entrance to the next level. We spent multiple sessions in the same general location, all because my party didn’t want to miss out on any treasure. And it wasn’t like they were at risk of being underleveled or anything. They all knew basically how quickly they were supposed to level up, and knew they had well outpaced our original trajectory, but the looting continued regardless.

Next there was the issue of the rogue. As is normal for any party with a thief, the rogue made an effort occasionally to hide some of his earrings from the rest of the party, popping open chests and looting corpses in the middle of combat rather than after it had ended. While normally this nothing but harmless fun, under the new system this was considered to be treason punishable by death. With gold being tied to a character’s individual capacity, it was important to make sure everyone got a fair share of the treasure so that no one became underleveled. While one would think a little discrepancy in this process could be accepted, such was not the case. My players would accept nothing short of a hyper-efficient socialism when it came to the gold. As such I actually had to pause the game at one point to tell my players they had to lay off the rogue, and remind them that the fantasy money he was stealing was not, in fact, real.

Sure enough, I got to a point where my players could have swam in their own gold-filled bag of holding, Scrooge McDuck style, but even then the greed wouldn’t subside. Ultimately I had to give in and create a sort of alternate milestone like leveling system to take the pressure off finding all the gold in the level, and in turn let people focus on something that wasn’t so material.

So ultimately was this experiment a failure? Pretty much. In the end, this system made my players pretty toxic to one another, and on my end it got pretty complicated having to perpetually tweak the economy over and over and over again.

However having said that, I think I am going to implement this system into all of my D&D games moving forward.

See while the “money is the root of all evil” style greed was a serious problem, it was very efficient at dealing with a much bigger problem that is far more disruptive to tabletop sessions, that being boredom. Again my friends aren’t necessarily all the most serious D&D players in existence, but this system cranked their engagement up to ten. Session after session I found my players interested in the “game” part of D&D and not just the improv-based fantasy story that we were putting together. This made it easier on my end to keep things interesting, and it made it so that not every session had to be filled with dramatic plot points. While it did cause a number of issues, most were easily solved, often by just telling my players to take it easy, and I would much rather have friends be too engaged as opposed to not engaged enough. So while the experiment was a failure, the base ideas behind the experiment were proved valid, I just need to think of a slightly better way to implement them.

So if you feel like your games need a bit of a jolt in the actual gameplay department, and you feel like you have what it takes to manage the greed that is inherent in all human beings, I strongly advise giving this a try. Just be ready for when the cleric starts getting really serious about tithes.

Wyatt Billingsley is a writer and a regular DM, who has a passion for all things fantasy. Born and raised in San Diego, CA, he graduated from the University of Iowa with a degree in English, and currently lives in Iowa City. When he does go outside he likes rock climbing and pretending he knows what he is talking about when it comes to wine.