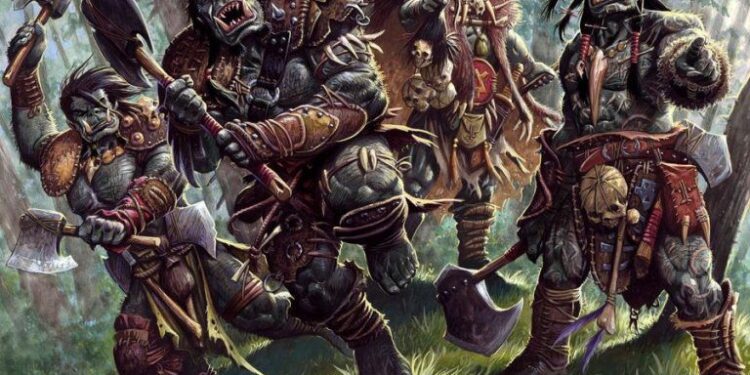 Today let’s take a look at the most fearsome of foes, Orcs, and how to use them beyond their stat blocks. As detailed in the first article, I’ll be taking a more story-centric approach to exploring how to use Orcs in your game beyond the stats presented in the Monster Manual or Basic Rules.

If you’re looking for a great supplement to add to your collection, Volo’s Guide to Monsters has a ton of lore and monsters to add to an encounter.

Finding the Story of Orcs

Orcs are often used as a low CR enemy meant to challenge a low level party similarly to how goblinoids are used. They are perhaps the most classic of all fantasy baddies, and some might feel a D&D world is not complete without them.

So that means that some extra work is needed to fit them into a campaign without making them feel like just another bad guy to mow down. You can do this by finding the story of the orcs.

While you can start with the grand cosmological reason of how the orcs came about, it’s better to start with the questions of “Why are these orcs here at this particular place?”, and “What threat do they offer the players?”

Why are the Orcs there?

Orcs, like most humanoid races, can have the same motivations as humans. They require food, shelter and clothing to survive. They, perhaps more than goblinoids, have a deep connection with their gods. In Volo’s, orcs are portrayed as deeply spiritual and superstitious, eager to prove themselves in the battle against their foes in order to gain the favor of Gruumsh.

Where a hobgoblin army is likely to invade systematically and set up a highly regimented feudal state, orcs conquer not to rule, but to destroy their enemies. Your orcs could be part of a larger force that has made their home in the high mountains above a fertile valley. They raid it every year to survive the cold winters, and to keep the populace afraid of them.

Orcs could also have sacred sites they feel they must defend, or prophecies and legends that they feel compelled to reenact or bring to fruition. The spiritual element of orcish society can also be used to rally them around a powerful non-orc who is able to convince them that the portents demand the tribe follows their orders.

The weakness of the orc lies in their fear of their gods. That can also be something to set the party up to exploit, perhaps offering a way to trick the orcs into thinking Gruumsh has turned against them or that the gods demand they exact a blood price from among the tribe itself.

Some questions to help you in developing your orcish horde include:

Now that you have a sense of what these orcs want, you can apply them to combat. An orc tribe composed of an ambitious leader who wants to rival Gruumsh is more likely to fight to the last man in a frontal assault. Whereas a tribe led by an aged mystic might be more devious, sending small raiding parties and using traps and snares.

Orcs are also more focused on individual glory than goblins. This can affect combat by prompting some to run away when at half health, or to stand and fight, or to betray the others in order to advance themselves.

You can use the table like the one below to roll for motivations for your orcs in combat:

What do the Orcs know?

Another important thing to consider is what intelligence the orcs have access to. If they’ve fought the party multiple times, they likely have a sense of what to expect when they show up and can come prepared to deal with the wizard’s spells, or the rogue’s penchant for sneak attack.

Orcs may not be the natural tacticians that hobgoblins are, but they know how to hunt effectively and how to wage war. Give your orcs a bit of cunning and you can quickly turn them into a greater challenge. Add traps, lure the players into ambushes, draw out the powerful spells before the horde descends on them.

An orcish shaman might have access to divination spells, and perhaps that is how they arrange raids, targeting the settlements that are revealed to be weakest. They could even retreat from the players, frustrating their attempts at snuffing the horde out.

I hope these tips helped you in creating a fun encounter with a dread orc horde. Next time we’ll take a look at another classic baddy: Gnolls.

Art is from Wizards of the Coast, by Ralph Horsley