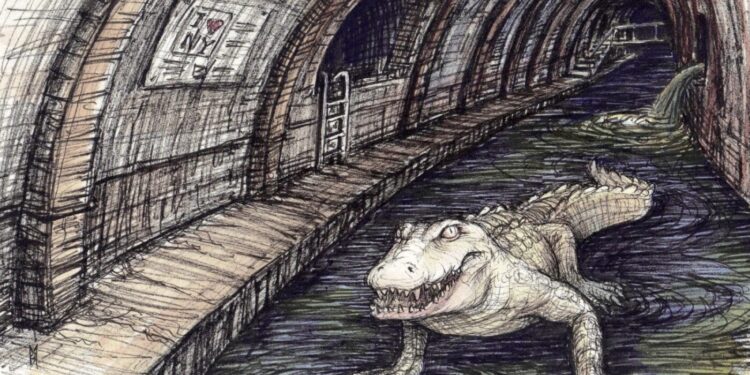 The city the adventurers are in has been dealing with a thieves’ guild for some time. After numerous tracking, the city watch has found that the thieves’ base of operations is probably located in the sewer system below the city. Two groups have been sent to investigate. The first group completely disappeared. The second one had one of the guards come back heavily scared. On top of having to deal with the thieves’ guild, there are also enormous crocodiles to deal with. One of them seems to be their leader, an albino one who is even bigger in size than the rest of them.

The albino crocodile has become a living legend between the guards, who now name it “Whitefang”. If they want to be able to deal with the thieves’ guild they need to get rid of the crocodiles. Luckily, the city is full of adventurers looking for work.

A Whitefang in the sewers

The player characters can receive the mission in a number of ways:

Traveling through the sewers

There are several dangers to be found in the sewers. Read or paraphrase the following:

Torch. Torches in the sconces can be taken out to have while moving through the tunnels. Lighting a torch takes an action. There are sconces with extinguished torches every 30ft.
Water. Moving through the water is done at half movement unless the creature doing so has swimming speed. The water is at the same level as the platforms on its side, allowing those swimming on it to easily climb to the platform.

While moving through the sewers, each of the players have to roll a d20 for a possible encounter along the way. Each roll symbolizes 30 minutes of travel. On a roll of 16 or higher, an encounter transpires. If it is an odd number, the DM has to roll for the number of members of the thieves’ guild below. Otherwise, the DM rolls for the crocodiles making an appearance. If all players but one have already rolled, continue to the Whitefang section.

1d4 bandits and 1 leader of the group see the characters in the distance. Roll any die to determine who the leader is. On an odd result, it is a bandit captain. On an even result, a thug. Its leader is guiding the path as it is an elf with darkvision.

Player characters can interrogate or ask about the albino crocodile’s location. The thieves’ guild is taking advantage of the beast as it keeps the city watch away from their base, and the thieves have already learned how to remain far from it. A DC14 Charisma (Intimidation) check against a thief after a battle can have them point in the right direction, removing one of the encounters to be rolled. Failing on the check has the thief lie, pointing in the opposite direction and having the players add one more encounter roll to be rolled.

Encounter balancing: If the PCs are level 1 or 2, replace the leader with an extra bandit.

Treasure. The thieves are carrying with themselves satchels with a total of 1d10 gp and a golden giant coin with the symbol of the city valued in 20gp.

1d4 – 1 crocodiles and 1 giant crocodile move through the water. Upon seeing the player characters they move towards them and try to grapple and move them underwater, where they have the advantage. Trying to scare the crocodiles off requires a successful DC18 Charisma (Intimidation) check.

Encounter balancing: If the PCs are level 1 or 2, replace the giant crocodile with an extra crocodile.

Treasure. 1d10 intact crossbow bolts pierce the side of the crocodiles’ corpses.

Whitefang starts the combat in the water and will try to grab and pull creatures underwater, where it has the advantage.

A white giant crocodile comes out from the water. Its body is massacred with scars aplenty and its right eye is of a bloody red color, bloodshot by a scar. The scales in its back are filled with dry blood with two handaxes and a harpoon stuck on it, as well as multiple broken crossbow bolts. A peculiar shining dagger pierces its right side, its blade still dripping a green liquid.

Whitefang is a giant crocodile with the following modifications:

Encounter balancing: If the PCs are level 1 or 2, Whitefang initiates combat at half health (67hp).

Treasure. Two intact handaxes, a dagger of venom, and 10gp for each player character among the dead corpses from Whitefang’s lair.

In order to make combat encounters more fun and interesting, consider adding the following things to the environment: 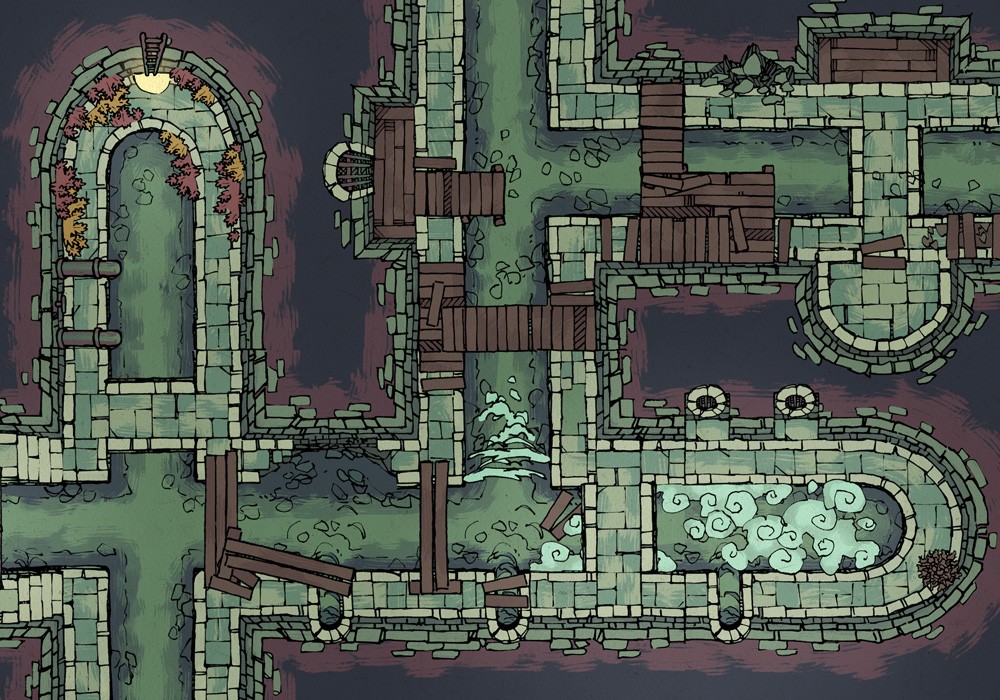