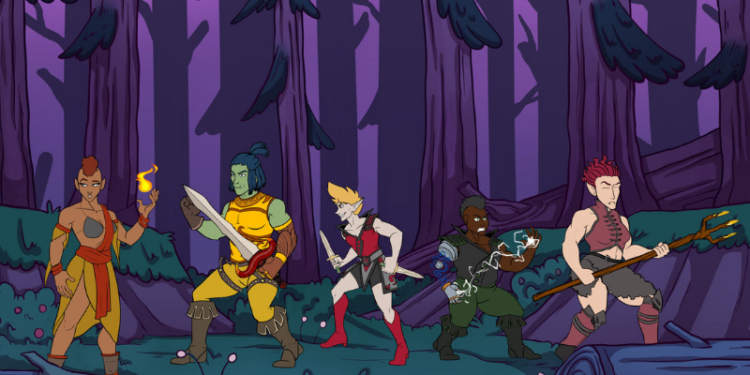 I am always on the lookout for new tools to add to my tabletop RPG arsenal. So when I was contacted by the folks over at a new TTRPG company, NeverEnding, to take a look at their character portrait creation tool, I went in expecting something that I’d maybe use as a player.

What I found was a robust and growing tool that can serve as a great help to both players and DMs to visualize both player characters and NPCs. With it you can build a quick character portrait in just a few minutes, customizing it for the body type, armor, species features, weapons, with even more options being added all the time.

I have a habit of creating characters faster than I can play them. I have spent hours on dndbeyond creating multiple wizards, each specialized to do some sort of wacky magic hijinks. I’m also a budding artist, but my portraiture skills are nowhere near developed that I can paint a character I’m making and be happy with it.

NeverEnding offers a really great way to take a character who exists only as a bunch of numbers and an idea on a character sheet and translate it into something closer to reality. Character portraits are a fantastic way for me to get more into character.

What my character chooses to wear, how they style their hair, what their body looks like are all important things I consider when figuring out how I want to roleplay the character. With NeverEnding, I can get that portrait nearly instantly. And it’s free to use, with some options behind a subscription.

It’s also a great way for DMs to create pictures of the major NPCs that they plan to introduce. Some players find it useful to have something tangible to look at when a new NPC is mentioned so they can keep track of them.

Additionally, you can input backstory information right into the portrait profile, so you can have all your character notes and portrait in one place. Each character that is created in the web app can be tagged so you can easily find it in a growing library of characters.

The art style of NeverEnding has a hand-drawn cartoonish quality to it that I really like. The app is still in beta, and according to their FAQ, they’re planning on expanding their focus from fantasy to other genres.

They’ll also be adding other art styles and “introducing manga style as well as more realistic and mature styles.” The developers even have plans to allow users to upload their own art so that independent artists can sell art assets they create.

There are some big plans in the works, with NeverEnding launching their second Kickstarter to add even more features to their character creator. More bodies, heads, hairstyles, facial features, and facial hair options are coming. And even more armor, clothing, weapon, and shield options. The community response to the Kickstarter has been really positive, with the second campaign being funded in 90 minutes!

I love seeing new projects like this that are made by people who love TTRPGs. From the artwork to the new options they’re adding (like a scene builder, so you can create cut scenes!), the people at NeverEnding are creating something really special.

You can access a lot of the basic options for the character creator by making a free account at their site. Right now, the app works best on desktop or laptop, but mobile options are planned to be released. Subscriptions are not that expensive either, with them being discounted to $1 monthly or $9 for a year subscription. If you’re interested, you can create a free account here.