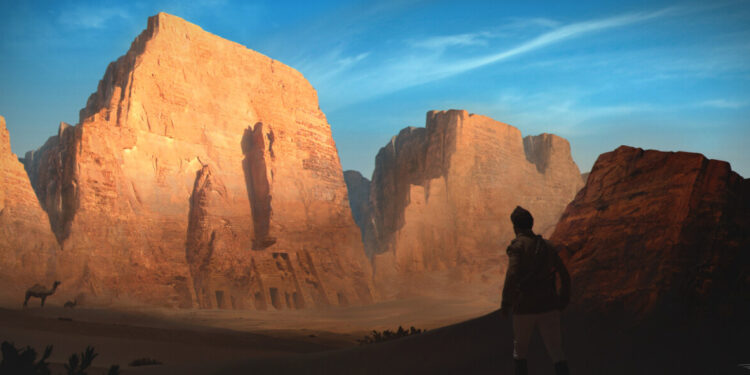 We finally did it! 20 different encounters, once per month, have already been written. These are great for one-shots, to add to your own campaign or to pull out of your hat if you run out of prepwork during a session… Some even can work to introduce new people to the hobby! Thank you for still coming to read all these encounters and I hope you keep finding great use out of them.

A group of bronze dragonborns was captured by death-domain clerics and used as vessels to store ancient lore. Once each of the Dragonborn were shared a separate piece of valuable information, they were immediately killed with a powerful poison and used as part of a bigger plan. These dragonborns were mummified and buried in a circle in the middle of the desert. If the death domain clerics or its descendants ever were to need any of the valuable information, they could use the power of a rune inscribed in sandstone in the center of the circle to reanimate the appropriate mummy and ask it to reveal the hidden lore.

Sephirion, one of the bronze dragonborns, found its spirit separated from his body upon being killed and mummified. He has now become a ghost. His spirit eternally roams the desert, looking for someone to help the bodies finally be put to rest so he can proceed to the afterlife. 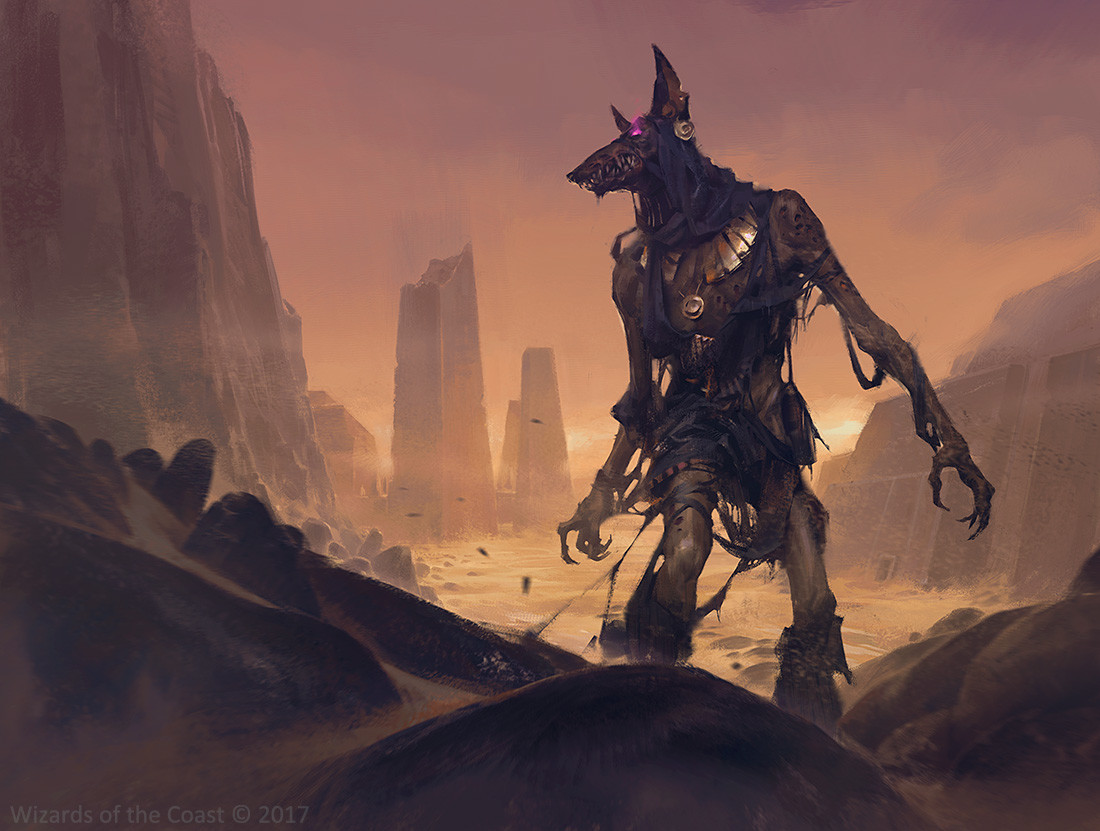 The encounter can start as a result of the following things:

The encounter starts by finding Sephirion’s ghost in some part of the desert. Sephirion asks for help in exchange of ancient lore and treasures. He wants the PCs to remove the curse that grants undeath to his and his companion’s corpses. Sephirion tells them that upon asking some traveling merchants he got to know of a powerful wizard named Layla, who specializes in abjuration magic. Sephirion is convinced the magic of the rune surrounding the vessels is the thing keeping the corpses in this state, and that it can’t be dispelled without properly studying and understanding its magic first. If player characters attempt to attack Sephirion, he tries to possess one of the PCs until they reach an agreement or they help him out.

It’s been what Sephirion believes to be 50 years since the rune was last activated to gather information from one of the corpses. The death clerics said something about it being powerful abjuration magic, which would make Layla the perfect choice to save him.

The rune can be understood and deactivated by characters proficient in Intelligence (Arcana), but the chance of doing so is extremely slim if there is not an abjuration wizard within the party. Sephirion believes the party has no chance in deactivating the rune without Layla or some other abjuration wizard. If an abjuration wizard is with the party, the party can easily convince Sephirion to lead them to the location, no check needed. If that’s the case, proceed to Circle of Lore. It takes a DC18 Charisma (Persuasion) check to convince Sephirion to lead them to the Circle of Lore without first finding Layla. Trying to intimidate Sephirion does nothing but anger him, who will give them one more chance before disappearing and never seeing the party again. If, on the other hand, the party agrees on looking for the wizard, Sephirion points them towards the town he heard she was located. He wishes them luck and asks them to find him in the very place they met, bringing  Layla as well.

Despite being described as a powerful wizard, Layla is no more than a novice. She is a half-elf wizard who works in one of the taverns from a near town. Finding her in the town requires some investigation via Charisma (Investigation), Intelligence (Investigation), and some Charisma (Persuasion) or Charisma (Intimidation) ability checks asking the local townsfolk or checking the establishments.

Cleaning the tavern tables the person matching the desctiptions you were given is finally at sight. This woman seems to be in her early 20’s and has a freckled face with orange curly short hair.  Her skin is almond colored and displays a star shaped piercing over her right eyebrow.

Being a novice in magic,  Layla works during the day to pay the rent and studies abjuration magic at night. Layla is looking for an excuse to go in an adventure, and thus easily accepts to accompany the party if asked to do so. Trying to impress the party members, she doesn’t reveal she only has little knowledge of magic unless pressed. A DC15 Charisma (Intimidation) ability check has her spit the truth, but that doesn’t stop her from pleading to go with the party. Even with little knowledge of abjuration magic, she knows enough to do what she is asked to.

During the travels across the desert, feel free to add random encounters. You can use these as examples:

In the middle of nowhere, next to a big sandstone rock lies a sandstone tile on the ground with a rune inscribed in it. A DC16 Intelligence (Arcana) ability check identifies it as an abjuration rune and reveals it produces a chain effect with other hidden runes. Properly deactivating its magic requires some time and can be done by a spellcaster that studied abjuration magic. An abjuration wizard (or Layla) can deactivate it by spending 4 turns using an action or bonus action. A practitioner of the arcane that isn’t an abjuration wizard needs to spend 6 turns to deactivate it. No matter who attempts to deactivate the rune, their movement becomes 0ft while doing so. If they don’t use one of their turns to keep inspecting the rune they must start all over again. Only one character can do the rune inspection at a time.

Read the following text when someone starts inspecting the rune:

Hands covered in dirty layers of cloth start coming out of the sand. The heads start coming out displaying dragonborn corpses with red shining eyes. Their full linen cloth covered bodies finally spring from the sea of sand and get up walking towards the center of the circle. 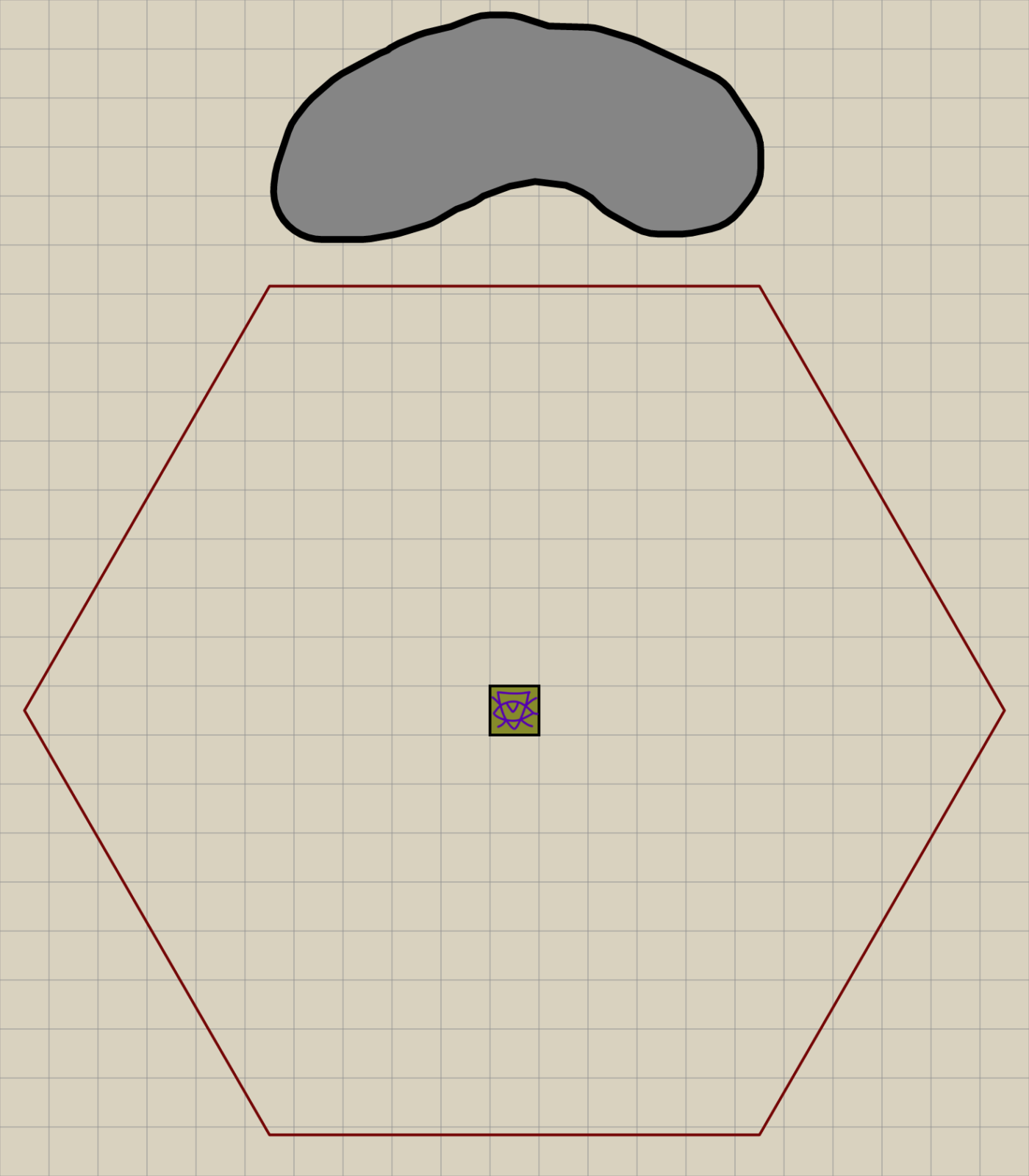 A number of mummies equal to the number of player characters +1 come out of the sand with the intention of attacking whoever is inspecting the runes. The mummies come out from any of the red polygon borders, determined by the DM. If a player character gets in their way the mummies ignore them dashing towards whoever is inspecting the rune. Only if immobilized in any way will the mummy attack another target. After 2 rounds have passed, an equal number of mummies to the ones that appeared before spring out from any point in the red polygon line. When a mummy drops to 0hp, there’s a 25% chance a ghost comes out from it and tries to kill the PCs.

Once all turns needed to deactivate the rune have passed all mummies turn to dust. Sephirion’s ghost thanks the player characters and informs them that for the rune to work the death clerics had to bury valuable items near it. There lies their reward. After saying this, his ghost finally vanishes.

If the PCs spend an hour burying to find their reward in the sand they find many relics and jeweled items like chalices, collars, golden bracelets, and more. The sum of all the items equals 750gp. Additionally, whoever deactivated the rune has their mind filled with all the secrets hidden within the mummies the moment the magic vanishes from it. You can use this to introduce the death-domain clerics as villains or to fill in the PCs with details that move the plot of the story forward.

If Layla is with the PCs by the end of the encounter, she will ask to go with them to keep getting better at magic. If denied, she asks for a share of the riches. Even if the PCs denied her staying with the party, she becomes a valuable ally they can consult at any time they need as Layla will always be eager to help adventurers.

Layla is a mage with no lvl4 or lvl 5 spells, nor lvl4 or lvl5 spell slots. Layla doesn’t attack unless she sees no other option. If pressed to inspect the rune quicker she reveals she lied about being as good a wizard as she said she was, but that she is doing progress. While investigating the rune she doesn’t make attacks.

Despite looking like Dragonborn mummies, they use the mummy stat block as well without gaining any extra ability. Some of these mummies had their spirits locked within it for eternity, which are sent in a rage when they come out from their vessel.

5 Tips For Outlining A TTRPG Session