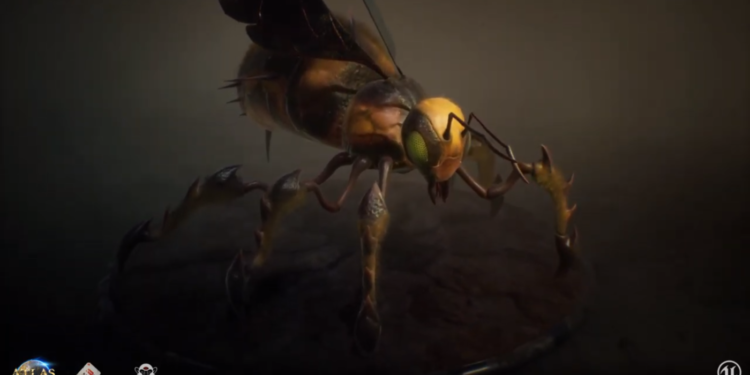 All art is by Jose David Cifuentes Ulloa

Myak of Many Teeth, the leader of the goblin raid group, encountered a giant honeycomb in the entrance of a forest deeply tied with the Feywild.  When he ate the honey from it, its ties to the Feywild made Myak develop a fascination with it. All he cared about was the honey. In order to have more honey, he needed to protect the giant bees that created it.

Papya, the tactician and barghest trainer from the raid group saw something else in these bees. If properly trained they could be used as fantastic flying mounts. Myak, being the leader, ordered he was the only one that could eat the honey while the rest continued raiding and protecting the honeycomb. Those who managed to try out some honey were destroyed by Myak and fed to the bees. 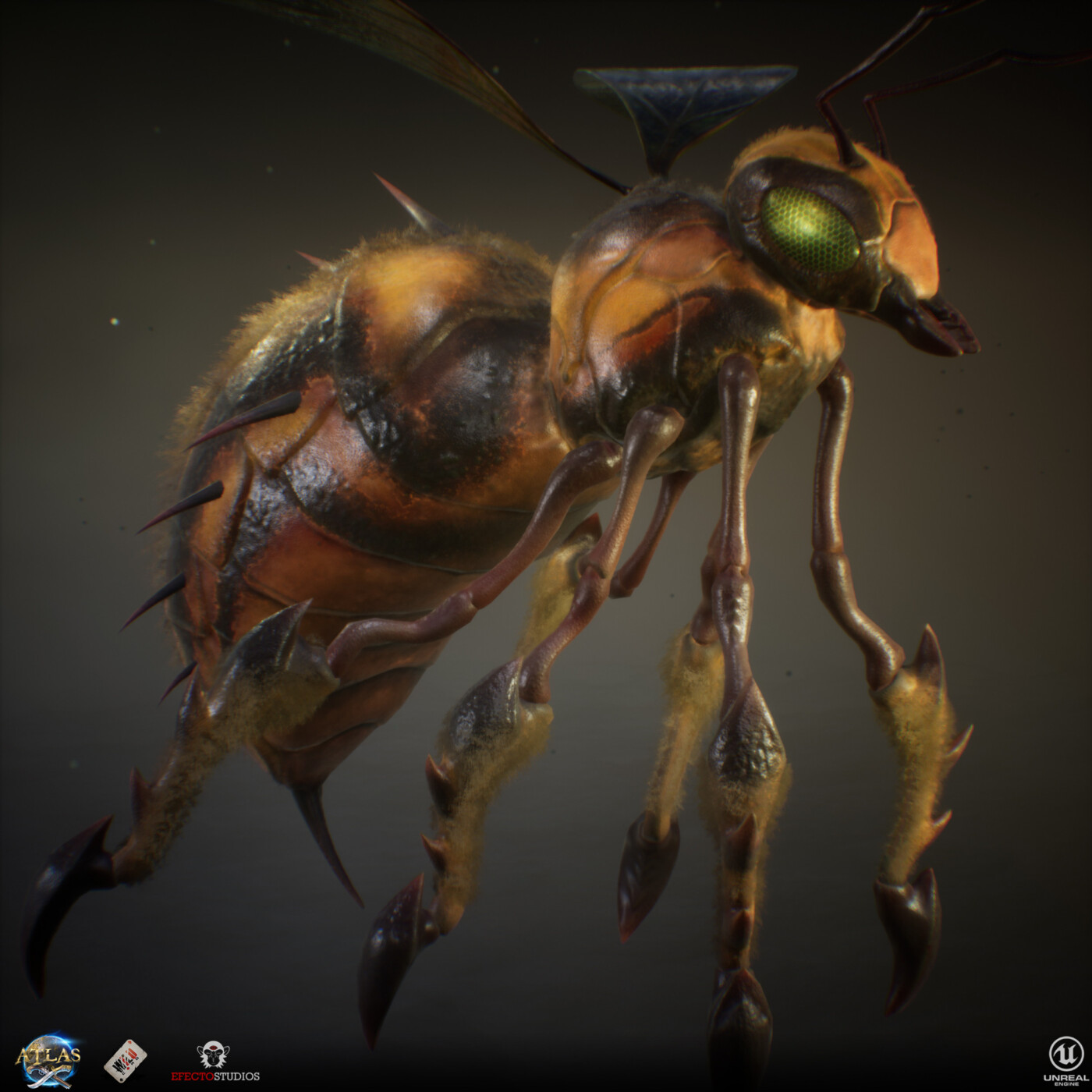 The adventuring party may get to know of the Myak of Many Teeth and the rest of their group in a number of ways:

The honeycomb is where Myak of Many Teeth resides with many of his bee friends. Circling the honeycomb are wooden walls that stand 7ft tall

Wooden walls. The wooden walls have an AC of 15 and 7hp. Applying brute force can knock one of its sides with a successful DC18 Strength (Athletics) check.
Honeycomb walls. The honeycomb can be destroyed from the outside. This has Myak shout in panic while all goblins come in his help. The walls are AC18 and have 10hp. 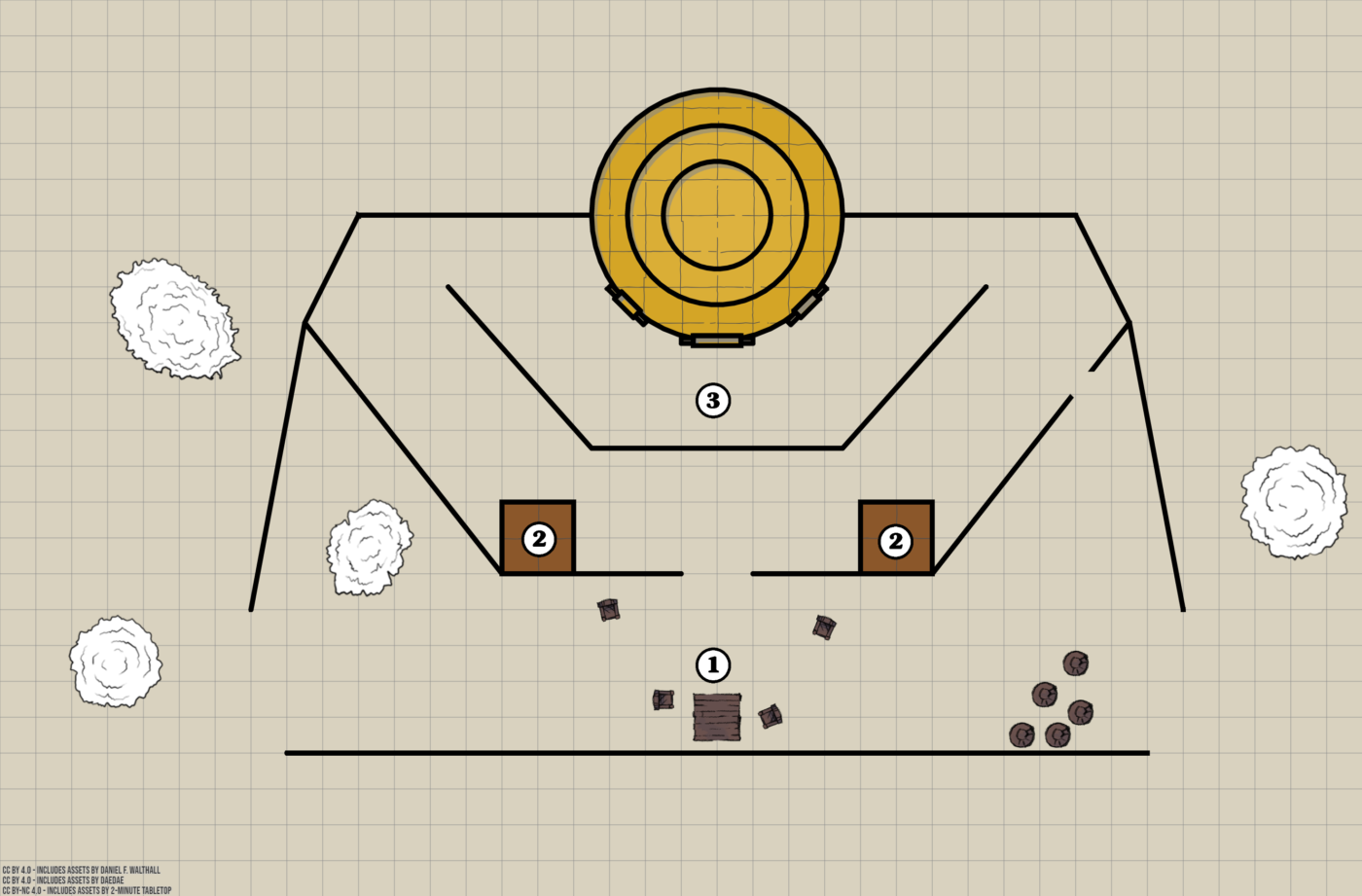 The moment the goblins detect the PCs they get ready to attack them, and the closest goblin to the giant bee jumps to it to start riding it.

Adjusting the encounter: If the PCs are level 1 or 2, remove one goblin.

On the right side, one of the wooden walls is broken from a bee that ate it. PCs can move through that space as if it was difficult terrain.

Adjusting the encounter: If the PCs are level 1 or 2, remove the goblin in the tower to the left.

Outside the honeycomb is Papya training 3 goblins on how to ride bees. There are 4 giant bees with them, ready to be used as mounts.

Myak only cares about the honey. He can be persuaded to remain in the honeycomb and stop the raids with a successful DC 15 Charisma (Persuasion) check. This check is made with disadvantage if one of the PCs attacked Myak. Myak cries in pain every time one of the bees dies, insulting the PCs in Goblin for doing so. If only one bee remains alive, no matter how many other goblins remain, Myak surrenders.

Adjusting the encounter: If the PCs are level 1 or 2, remove one goblin and one giant bee.

Inside the honeycomb lies the queen bee, who is unable to battle, and who Myak likes to cuddle with. The honeycomb has enough honey to fill 10 buckets. Upon eating this honey, the PC must make a DC17 Wisdom saving throw or be charmed to only want to eat this honey for the next 1d4 days. The PC can repeat the saving throw at the start of each day.

Additionally, there is the corpse of an elf with 60gp and a ring of evasion.

If the PCs are defeated by the goblins, they will be taken to raids as hostages alive while the goblins shout at the townspeople that if they do any wrong movement they kill the PC. This allows the player characters a chance to escape and regain forces.

If, on the other hand, the adventurers defeat the goblins, the near villages thank them with free stays in all their taverns.

The giant bees use the giant wasp stat block. They fly at half speed while carrying a gnome. Goblins can’t use their Nimble Escape feature while riding the bees.

Papya is a female goblin who lost her right eye and is missing two of her fingers. She uses the goblin boss stat block and has 1 legendary action that can be used once per round:

Myak of Many Teeth is a goblin with an extra set of teeth in his mouth, like a shark. His eyes are bloodshot and is completely covered in honey. He uses the goblin boss. Additionally, he has the following abilities:

G4 AND WIZARDS OF THE COAST PARTNER ...