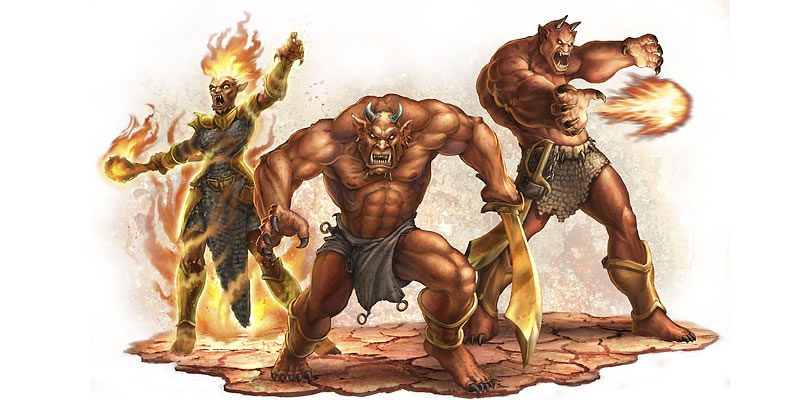 Welcome to a new series I’ll be putting out over the next few weeks showcasing monsters from each of the monster types that can create fun and interesting main villains, or monsters of the week for your Dungeons and Dragons campaign. This week we’ll be focusing on Elementals!

Elementals as Monsters of the Week

A monster of the week is a villain who is fought by the party and whose story is generally wrapped up in that session. They can come back seeking revenge, or as a later Big Bad villain, but they make great villains for sessions dealing with side-quests or with more character-centric storylines.

Elemental monsters are hugely varied, offering more than just a trundling pile of stone, a puddle of water, tornado, or bonfire (though those are an awesome option). Here are some of my favorite monsters of the week arranged by CR:

The Fire Snake is the baby form of a Salamander, the snakey-human natives of the elemental plane of fire. These are great monsters to set up a session with, especially if the characters don’t know what they’re dealing with.

A blacksmith may have woken to find their eggs in his forge and when they start to hatch burn down the village. The party can have multiple problems to deal with as they try to contain the fire and get rid of the Fire Snakes. And it leaves open the possibility of encountering the Salamander who laid their eggs there returning full of fiery wrath.

A Water Weird is a water elemental that has been bound to protect a specific water-filled location. They are not innately hostile, simply driven by their summoner’s command to protect the area, but can be good or evil if the waters are fouled or blessed. That alignment can influence whether they try to scare off or kill intruders.

Water Weirds can be used as a complication in what should be a simple fetch quest. They can be a murder weapon, placed in a nobleman’s bathtub by a wizard-assassin. While not capable of scheming or brilliant tactics, their presence indicates someone purposefully placed them there. You can leave clues about a bigger threat in what the Water Weird is guarding for your party to follow.

Xorn are weird-looking natives to the plane of Earth. They hunt down gems, precious metals, and other treasures in order to consume them. They also leave no evidence of their burrowing through the earth, meaning you could do something like that one episode of Star Trek where some miners are being killed by a mysterious stone creature.

They can also be great monsters to throw at your party before a big villain confrontation, forcing them to spend resources in order to defeat it. However, Xorn are not evil and will try to bargain with those who have treasure, resorting only to blind rage and violence if starved or angered.

Big Bads are recurring villains and is from Buffy the Vampire Slayer, where it was used to describe the villain of the season. The Elemental monster type offers many awesome monsters that can be used as this kind of recurring villain, but the ones I love the most are the Genies.

Each element has its own kind of genie; Dao for Earth, Djinni for Air, Efreeti for Fire, Marid for Water. All genies have some basic characteristics:

So you have all the elements (hehe) of a classic narcissistic villain to throw at your party.

I like to start with finding the motivation for a Big Bad to care about the party, and for Genies, the obvious one is that the party is an obstacle in their ability to get what they want: more power and worshippers.

The first encounter with the Genie’s forces could be in a village that has rejected the gods and instead worships something like a Water Weird left by the Genie to guard a portal to their realm. From there the party puts together clues that there is Marid at work behind the scenes.

The party may have some sort of object that the genie desires, but that the party would be hard-pressed to part from. If rejected, the Genie may send their slave army to retrieve the item. They could also want the party as their slaves, or the party might befriend some slaves and try to start a rebellion.

I hope today’s article left you with some ideas for your next session or campaign. Next week, we’ll look at the Construct monster type for potential monsters and villains.

Image credit to Wizards of the Coast