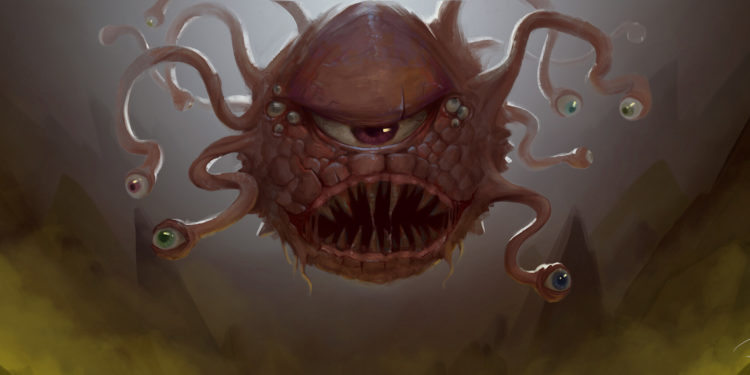 Aberrations are a monster class that does not lack for iconic and terrifying baddies to throw against your party. From the mind-bending Aboleth to the reality-warping Beholder, it was hard to narrow down the list. So, this week we’ll take a look at some of my favorite aberrations that don’t get the spotlight as often as Mindflayers, Aboleths, and Beholders that you can use in your next session of Dungeons and Dragons.

You can check out previous articles in this series where I cover: Elementals and Constructs

Aberrations as Monsters of the Week

Aberrations are some of my favorite monsters because they are the most alien beings in Dungeons and Dragons. A genie’s motivations resemble that of a human, albeit on a grander scale, and even a god possesses a mind that a human might not be able to fully encompass, but can parse out their motivations with some accuracy.

An aberration, however, is wholly alien. All that is clear is that they disregard humanoid life as being anything other than a food source or a useful source of labor. No aberration is the same as another and their motivations can differ, forcing the players into the middle of a conflict between two aberrations. As a monster of the week, they present a fantastic horrifying monster to send a chill down your player’s spine while also introducing an element of planar mystery to the campaign. After all, once the aberration is defeated the question remains of how did they get here?

These delightfully squishy mouthy bois, Gibbering Mouthers are a great low-level monster to send en mass against a party. With their Gibbering feature potentially putting melee characters out of the fight for a turn or more, and their Blinding Spittle attack blinding ranged characters, they make formidable foes for low-tier characters to contend with.

Nothic are spies and secret gatherers that you could use as untrustworthy allies needed to gain information from, or as tools by your big bad to gather information about the party. These creatures have an array of sight-based actions that you can use to augment another creature, perhaps having a Nothic command lesser aberrations or cultists against the party.

The garbage disposal of the D&D world, the Otyugh lies in wait for their prey to venture near their garbage heap before attacking. These guys can be great monsters of the week, whether it is because one has moved into the sewers of a city, or because the Municipal Otyugh has gotten loose and is ravaging the Merchant District. Otyugh are classic D&D monsters that hit hard and can take a lot of damage before being defeated.

Like an evil power ranger squad, Slaad comes in various colors including Red, Blue, Green, Grey, and Death (which I imagine as a kind of frisky mauve). These children of chaos can make excellent Big Bads, but they can also serve as a monster of the week, erupting from a stranger’s chest. The party must track down all the infected hosts and either kill them or cure them before the slaad tadpoles transform into their adult forms.

Neogi might be simple CR 3 aberrations, but they have the capacity to be formidable Big Bad Guys in any campaign. They are slavers and raid worlds in the material plane for their slaves. Capable of psionically enslaving creatures, they can wield an army of powerful monsters, or hide in plain sight using a town they’ve dominated as a honey trap for more victims.

Neogi are vicious and tyrannical, they can lead the party on a planar adventure as the party tries to recover loved ones that were stolen. Or they can be a sometimes-ally against a greater threat, offering their large slave armies and a contract that is as tricky as any devil’s bargain.

When using neogi, think about how their factions are divided. They do not have the same motivations or loyalties as humanoids, so if the party demonstrates themselves as dominant, perhaps a few defect to the player’s side. They are irredeemably evil, and should be played as such.

Next week, we’ll take a look at Beasts! Rawr!