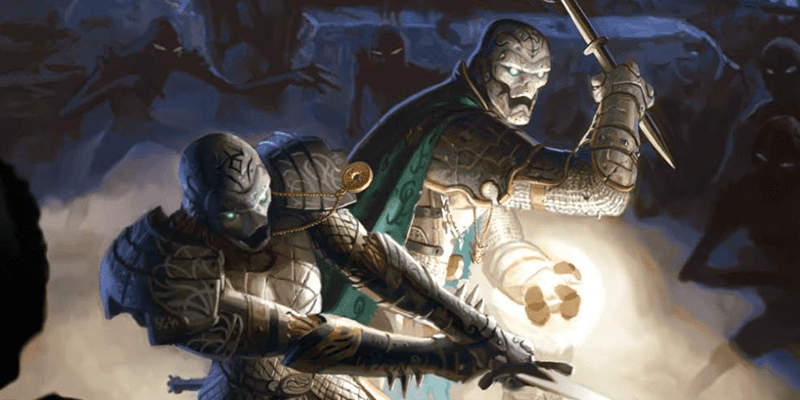 Welcome back to this series where I explore different monster types, showcasing monsters that can be used as monsters of the week or as the big bad of your campaign. This week, we’ll be focusing on Constructs.

If you missed last week’s article where we explored Elementals, check it out here.

Constructs as Monsters of the Week

Constructs make really good monsters of the week, capable of being retooled by a Dungeon Master to fit the details of their campaign. Most require some sort of master that issues orders to them, so their presence can alert the party to a larger (and powerful) threat.

The Homunculus may not seem like a creature you could easily feature in a session as the primary antagonist, but it has a combination of skills that can create a very interesting session. Homunculi are made by a ritual and are extensions of their creator. They share all the knowledge of their creator and everything the construct senses is known to its master as long as they are on the same plane.

Their use lies in acting as the orchestrator of the conflict in the session while keeping the identity of their master secret. What better way to up the stakes of a political intrigue-focused campaign than a homunculus poisoning a vat of wine, or issuing instructions to other constructs, or simply spying on the party as a horde of hired mercenaries attacks them.

If the homunculus is captured perhaps a high Arcana roll or a researched special ritual can unbind the homunculus and allow the party to find its master.

I love any monster that is an ordinary object made monstrous. The Rug of Smothering does just that. Indistinguishable from a normal rug when motionless, it can lie in wait for its victims before smothering them. It also only takes half damage when grappling a target, and the grappled target raking the remainder.

The Rug of Smothering can be a great monster for a murder mystery-type session. The party can find victims strangely asphyxiated but with not discernable marks on their throat. Eventually, the party could detect the presence of the rug either through detect magic or some other means. This could lead them to the true killer or to some other larger mystery in the campaign.

Golems are hugely varied and make excellent recurring monsters as the party tries to track down the conjuror making them. They also each present their own strategic hurdle for the party to overcome. They are incapable of thinking for themselves (though feel free to change that part up if it makes your session more interesting) and live for a long long time. Each has a special control amulet potentially transforming them into an asset for your party.

Whether you use them as the guardian of an ancient tomb or in a combat encounter that includes their caster master, golems can present a challenge to the party requiring them to adapt to the golem’s abilities.

The Steel Predator from Mordenkainen’s Tome of Foes is a great monster for a monster of the week games. It’s sent out to hunt down a specific target, which could be an NPC or a party member. But what intrigues me the most is the mention in the description that sometimes they go rogue and start hunting down all creatures that resemble their target.

This can be a great murder mystery session as all the elves with green hair are targeted in a city, perhaps a few weeks after the party damages – but doesn’t destroy – a steel predator. They can also be used as a primary way that the Big Bad harasses the party as they near his lair, sending waves of assassins at a high-level party to try to stop them.

Marut are fearsome CR 25 constructs built in the City of Sigil to enforce a contract. They are intelligent, relentless, and essentially cosmic D&D Judge Dredds. They rigidly enforce contracts relying on the letter of the law, and ignoring its spirit. They are capable of teleporting creatures to the Hall of Concordance in Sigil, stunning creatures within 45 feet, and are magically resistant.

These planar juggernauts can be great Big Bads for campaigns that either start with a signing of one of these contracts, or as the party attempts to minimize the damage the Marut causes as it goes about enforcing the contract. A king or powerful wizard could have signed a contract with a devil to gain great power in exchange for the whole kingdom after 200 years of power and now the contract has come due.

The Marut does have a high intelligence score and can serve as the primary antagonist, hounding the party with other construct minions. Or it can be treated as something more like a natural disaster and the party has to try to work around it to find a way to break the contract and end the destruction.

Next week we’ll explore the gross and slimy Aberrations!

G4 AND WIZARDS OF THE COAST PARTNER ...

2 Spooky Puzzle Encounters for your RPG ...