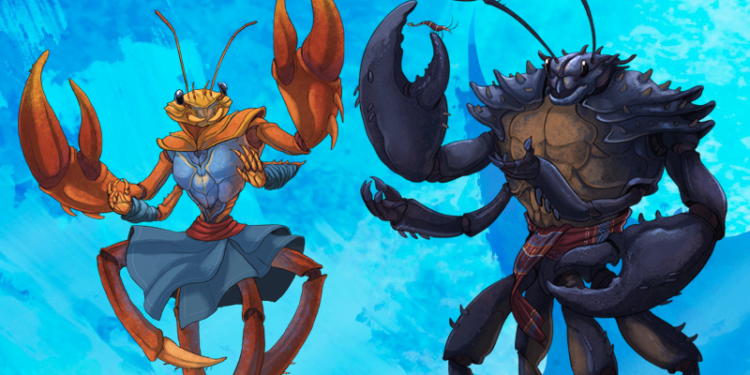 This week on the Campaign Trail, I thought I would share a new undersea racial option I am working on for the Under the Seas of Vodari. Some of our backers mentioned they wanted to see some kind of crustacean racial option. I already had crabfolk on the top of my list of options I hadn’t been able to fit into the book. I’m working on expanding out the lore, so this is mainly stat blocks for now. If people like this, I’ll expand out the lore and get it added to the book. Let us know in the comments below what you think of this racial option. 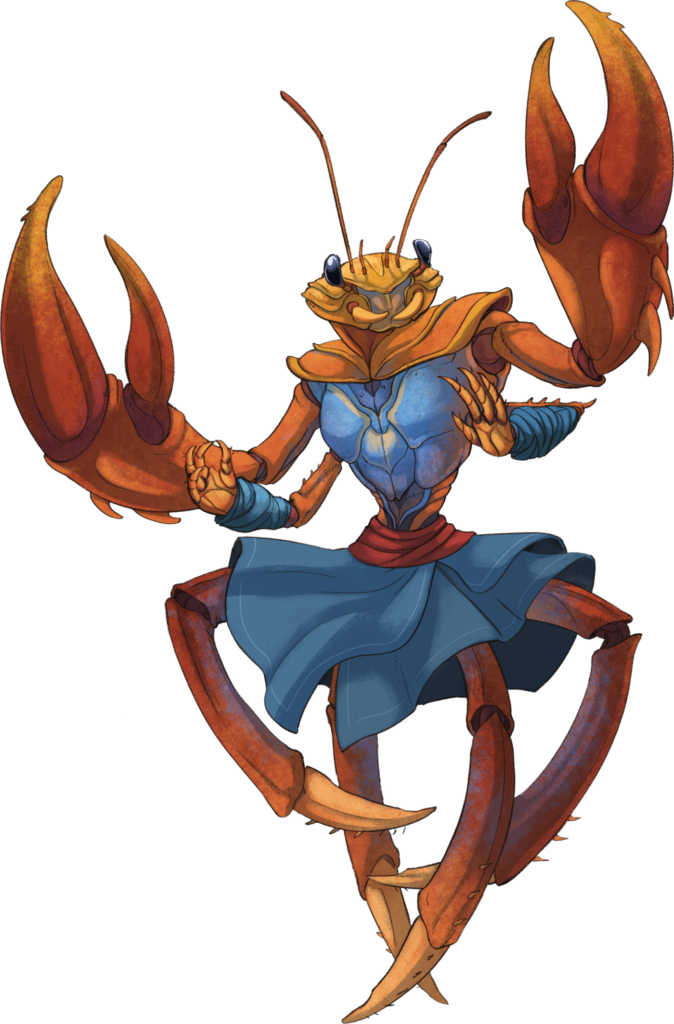 Karokans, called crabfolk by most, are amphibious crustacean humanoids most known as peaceful nomads who keep to themselves. Adapting to vastly different environments divided these undersea people into the Shallows and Deeps karokans. As nomads, they act as guardians of the sea, herd sea creatures, or simply hunt and gather. Most karokans keep far from the settlements of other undersea people but the more adventurous have proven to be excellent heroes. \

Traditionally, karokan names get longer as they age. When born, they are given a first name by their parents. Each time they molt their shell as a child, they will also be given a middle name, each for a revered ancestor. By the time they molt their final child shell, a karokan will usually have three or four middle names. Most karokans are addressed by only their first name. Full names are quite formal and used mainly to respectfully address pod elders or by parents scolding a youngster.

Your karokan character has the following racial traits.
Creature Type. You are a Humanoid.
Ability Score Increase. Your Wisdom score increases by 2.
Size. Your size is Medium.
Speed. Your base walking speed is 25 feet. You also have a swimming speed of 30 feet.
Amphibious. You can breathe both air and water.
Claws. The claws on your outer arms are natural weapons, which you can use to make unarmed strikes. If you hit with it, you deal bludgeoning damage equal to 1d6 + your Strength modifier, instead of the bludgeoning damage normal for an unarmed strike.
Natural Armor. A thick carapace covers your body. When you aren’t wearing armor, your AC is 13 + your Dexterity modifier. You can use your natural armor to determine your AC if the armor you wear would leave you with a lower AC. A shield’s benefits apply as normal while you use your natural armor.
Powerful Build. You count as one size larger when determining your carrying capacity and the weight you can push, drag, or lift.
Languages. You can speak, read, and write Common and Karokan.
Subrace. Over eons, karokans have evolved into two subraces: shallows karokans and deeps karokans. Choose one of these subraces. 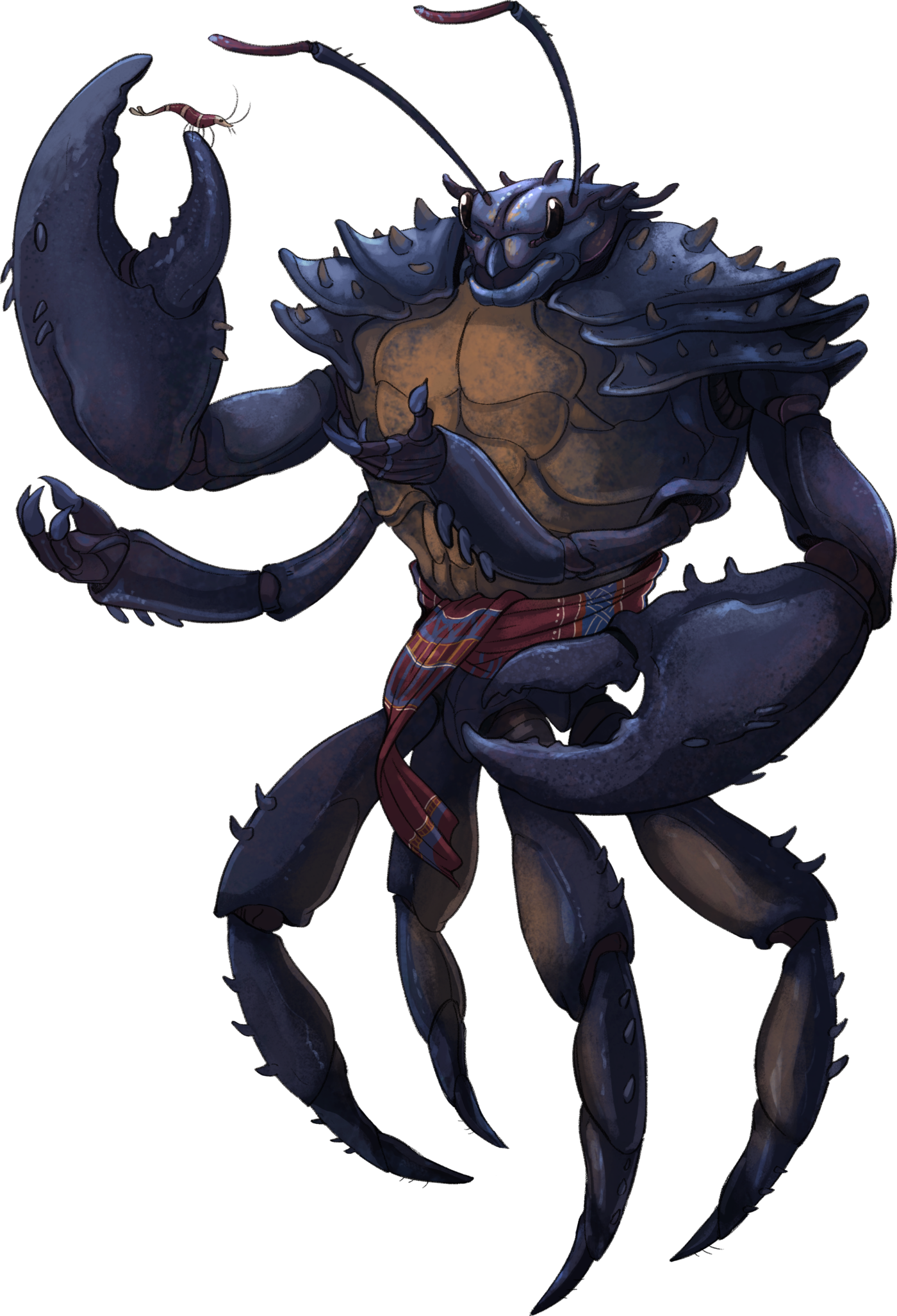 As a deeps karokan, the cold and dark sea bottom is your home. The nomadic ways of your ancestors have granted you physical gifts to survive this harsh environment.
Ability Score Increase. Your Constitution score increases by 1.
Darkvision. Accustomed to life deep underwater, you have superior vision in dark and dim conditions. You can see in dim light within 60 feet of you as if it were bright light, and in darkness as if it were dim light. You can’t discern color in darkness, only shades of gray.
Dweller of the Deeps. Accustomed to the deepest seas, you have resistance to cold damage and you ignore any of the drawbacks caused by a deep, underwater environment.

As a shallows karokan, you are naturally adapted to living in the Sunlit Seas. Your ancestors bestowed you with both knowledge and physical gifts to survive wandering these waters.
Ability Score Increase.  Your Dexterity score increases by 1.
Dweller of the Shallows. You gain proficiency with two of the following skills of your choice: Animal Handling, Nature, Perception, or Survival.
Strong Swimmer. Your base swimming speed increases to 35 feet.

Your large, outer arms end in a claw that can only be used as a natural weapon or to hold an item. Your large claws can not be used to interact with an object, cast a spell, or make an attack with a weapon. Your smaller, inner arms end in finger-like claws which should be considered hands that operate the same as those of any other humanoid.

You can not equip any more weapons or make more attacks than rules allow. In addition, you can benefit from only one shield at a time.