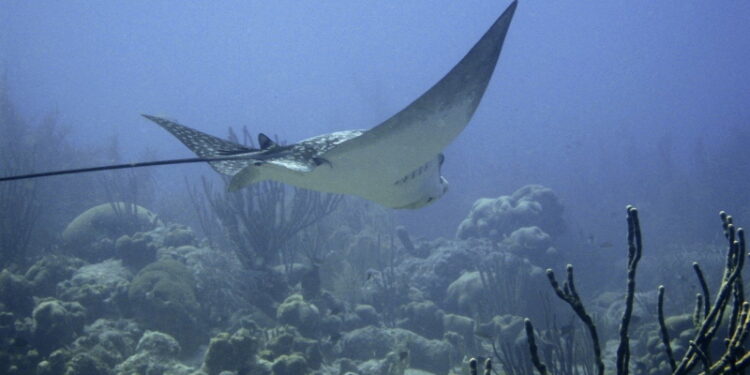 One of the exciting things about writing an aquatic setting is that there are whole creature types that don’t have a single aquatic or swimming creature in the Monster Manual, VGTM, or MTOF. Fiends, for instance. There have been aquatic fiends in D&D – the 3.5e Fiend Folio has four – but they’re rare. To get the obvious thing out of the way, you can just bolt a swimming speed, the amphibious quality, and some gills and fins onto existing fiends. In fact, I encourage you to do a bit of that. Those are still going to look like surface-dwellers that got a fresh coat of paint, though, so in this article I’m presenting a new demon and a new devil, purpose-built for undersea use.

A vitriseng is an aquatic demon that attacks unseen and leaves a strange transformation in its wake. They are naturally colorless and almost invisible; only while they are feeding and after they have recently fed do they gain color. The victims they leave behind are drained to transparency, with jellified flesh or chitin. Above all other prey, vitrisengs hunt the endlessly changing and colorful voda.

Vitrisengs prefer to hunt in vibrant places such as coral reefs, where everything they touch can feed them. The leaching of color and form can take years to recover, if there is anything left to recover at all. They are also often found in places where a battle has left corpses behind, as they can arrive even more swiftly than other aquatic scavengers. They are feared and hated by all aquatic peoples, and rumors of one can lead blood enemies to set aside differences to carry out a hunt.

The guuldrom, or distortion devil, is an inquisitor among devil-kind, revealing weakness and treason against the authority of archdevils and Nemesis herself. They are precise and ruthless in their search, finding fault worth punishing in almost everyone they encounter. Though a guuldrom’s body is approximately humanoid, it has a featureless, mirror-like face with only a maw of jagged teeth. Its limbs end in webbed hands and feet, and its forearms and lower legs have fins. Guuldroms usually wield sharktooth blades or rapiers.

Guuldroms are feared and loathed by other fiends, as they carry authority above their station, infiltrate even powerful strongholds almost at will, and reveal secrets great and small. Even pit fiends would rarely summon or associate with a guuldrom, though guuldroms have no similar compunction to deputize lesser devils into service.

The sharktooth blade is a new weapon found in Under the Seas of Vodari.

Sharktooth Blade. 25 gp, 1d8 slashing, 3 lb. Finesse, special
Special: While underwater and making a melee attack with a sharktooth blade, the attack roll does not have disadvantage, even if you don’t have a swimming speed.

It’s curiously difficult to make something feel fiendish, as distinct from “just another predator,” because – for OGL reasons – I can’t touch on the Nine Hells of Baator or the Infinite Layers of the Abyss. I’ve written new lore for devils and demons in Vodari, which will appear in Under the Seas of Vodari, which is where the Nemesis character is explained.

(If you’re one of the people reading this who also knows the Wildlands South campaign, I can neither confirm nor deny that I think Nemesis would wear silver eyeshadow.)

How to Use Side Quests to Deliver ...