FANDOM TO LAUNCH TALES OF XADIA: THE DRAGON PRINCEROLEPLAYING GAME ON MARCH 29

Official TTRPG for the Netflix Animated Series The Dragon Prince

Step into the Emmy Award-winning world of The Dragon Prince with Fandom’s official tabletop roleplaying game Tales of Xadia: The Dragon Prince Roleplaying Game available to gaming fans everywhere on March 29 at TalesOfXadia.com. The lands of Xadia are overflowing with adventure and promise! What role will you play? An elf innately connected to the primal magic of the world, or a hearty human who creates their own destiny? What legends and wonders will you witness, what triumphs will you achieve? Explore the vast possibilities, undertake epic challenges, and discover new, never-before-seen lore from The Dragon Prince. 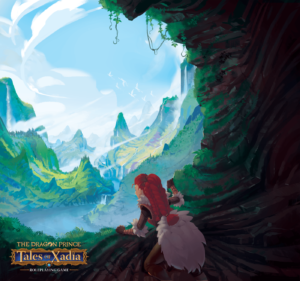 Already an ENNIE-winning game for its 2021 public playtest, Tales of Xadia: The Dragon Prince Roleplaying Game is built with Cortex Prime, a world-building tabletop RPG system from the creators of Fandom’s D&D Beyond and award-winning designer Cam Banks (Marvel Heroic Roleplaying, Smallville Roleplaying Game) where you and your players choose the genre, build the game, and forge the story from a set of modular rule mechanics.

Created by Aaron Ehasz (head writer & Co-Executive Producer of Avatar: The Last Airbender and former League of Legends creative director) and Justin Richmond (game director of Uncharted 3), The Dragon Prince is one of the fastest-growing franchises in family entertainment. Tales of Xadia will feature official storyline content that bridges the gap between Season 3 and the upcoming Season 4 of The Dragon Prince. Players can explore the ruins of Lux Aurea, try to restore the corrupted Sunforge, and fight to stop the spread of the monstrous influence it radiates. This off-screen story will come alive in the game prior to Season 4’s release.

In The Dragon Prince, an extraordinary discovery inspires two human princes and an elven assassin to team up on an epic quest to bring peace to their warring lands. In Tales of Xadia: The Dragon Prince Roleplaying Game, players will take on the role of characters they create to tell stories of Discovery, Intrigue, and Adventure to bring their own unique stories to life with friends. Cortex Prime’s game mechanics are a perfect match for the vibrant storytelling of the Netflix show, aided by Narrative Lead Dan Telfer (longtime Dungeon Master of the Nerd Poker Dungeons & Dragons podcast, former Senior Editor of MAD Magazine) offering guidance, lore, and entirely new Xadian stories throughout the book’s 300 pages.

“Tales of Xadia will give fans a way to participate in a new chapter of The Dragon Prince story,” said Cam Banks, Creative Director of Cortex and Game Designer for Tales of Xadia. “The launch of this new game simultaneously with a bespoke digital toolset – tools made by the same company designing the game itself – is the first time tabletop gamers have been digitally equipped for a game launch, bringing the world of Xadia to life for fans at all touchpoints.”

“We can’t wait for The Dragon Prince fans to dive into this game and share new adventures in Xadia with their friends” said Aaron Ehasz and Justin Richmond, co-creators of The Dragon Prince. “Tales of Xadia is a rich experience with new lore and lots of opportunities to engage with the characters, places and magic that make up The Dragon Prince world.”

Based on the award-winning Cortex rules system, Tales of Xadia offers 300 pages of visually stunning artwork, expansive lore, and easy-to-learn but fun-to-master game mechanics that allow players to explore Xadia as elves connected to the primal sources of magic or as a member of the Human Kingdoms. Players can customize their traits and special abilities, define values that motivate their characters, accomplish feats of might, mind, or magic, achieve goals, roll dice, and track everything—all with digital support. 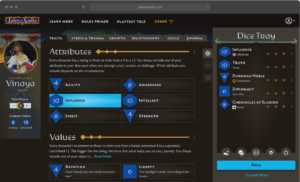 The word “play” isn’t just for the player characters: Narrators in Tales of Xadia take on the special role of inviting their friends into the world of The Dragon Prince and into the story of their game, and they’ll have the opportunity to bring life to humans, elves, creatures, and over forty new types of dragon as they do. The book includes a fun and expansive guide to help Narrators, both new or experienced, and young or old, easily bring their own Tales of Xadia to the table for friends and family.

Fandom is the world’s largest fan platform where fans immerse themselves in imagined worlds across entertainment and gaming. Reaching more than 300 million unique visitors per month and hosting more than 250,000 wikis, Fandom.com is the #1 source for in-depth information on pop culture, gaming, TV and film, where fans learn about and celebrate their favorite fandoms. Fandom’s Gaming division manages its direct-to-consumer subscription businesses including the leading tabletop role-playing-game platform Dungeons & Dragons Beyond, which has more than 9 million registered users, and the online video game retailer Fanatical. Fandom Productions, the content arm of Fandom, enhances the fan experience through curated editorial coverage and branded content, its Emmy-nominated Honest Trailers and the weekly video news program The Loop. For more information follow @getfandom or visit: www.fandom.com.

Wonderstorm is a double-threat multimedia startup dedicated to creating timeless entertainment franchises anchored by rich, character-driven stories and engaging video games that will delight audiences of all ages for generations. Wonderstorm’s first franchise, The Dragon Prince, began as an animated series on Netflix in 2018 and has since been renewed for its full seven-season arc. The first three seasons, streaming now, have each become a “Top 10 Digital Original,” and are rated 100% Fresh on Rotten Tomatoes. The series recently received an Emmy® Award for Outstanding Children’s Animated Series. A world-class video game for The Dragon Prince is currently in development by the same creative team. For more information, visit:  http://wonderstorm.net/.

Tales of Xadia is primed by Cortex, a rules system previously used in award-winning games in the universes of Marvel, Firefly, Battlestar Galactica, Supernatural, and more. Designed by Cam Banks, the ENNIE-award winning Cortex Prime is the latest iteration of the system. After you pre-order Tales of Xadia: The Dragon Prince Roleplaying Game Handbook on TalesOfXadia.com, explore the free Rules Primer, twelve free ready-made characters, and two free tales already available for you there. For more Cortex Prime experiences, you can try another Cortex game for free with the Hammerheads spotlight game, available now at CortexRPG.com.