Okay.  There are three role playing games that I liked back in the ’80s from TSR: Dungeons & Dragons, Star Frontiers and Top Secret. With the new release of D&D 5th edition, I am excited. I’ve been playing for months now.  And now I am reflecting on what else could I do with these awesome rules.  Hmmmm… oh yeah, remember I said I liked those three role playing games. Top Secret shouldn’t be too hard, just add guns.  Star Frontiers.  Yeah! That sounds crazy cool!

There will probably be rules in the DMG for something like this. Conversion and creating and what-not.  But that so far away, and as a bonus, when the DMG is released, I can see how bad I did. Plus, since these races will be D&D 5e compatible, you could place them into your existing D&D campaign.  Alien marooned on a world full of magic… 🙂

So I never really got very far when I played Star Frontiers.  I loved reading the backstory and the rules and everything, but it was difficult to switch back and forth between different rules sets, so I just stuck with AD&D.  But I think with the flexibility of the D&D 5th edition rules, I could easily put together a human, but a Dralasite.  Hmmm… weren’t there computers and robots. I also remember something about psionics and other stuff. I’m going to have to pull out all my books now and start reading.  First I’ll start with Character Creation, and weapons, and see how it progresses.

From what I remember there were 4 races to choose from Human, Dralasite, Vrusk or Yaziran.  But there were actually 12, and those were added later on.  The human will be easy because he’s already in the rules. If you choose a Human Variant, those Feats should work. Except for the magic or maybe go ahead and let them. Those four are where I’ll start and maybe I can add the other 8 later.  Each Race below I’ve linked to a cool Star Frontiers Wiki that has all the details on each race that you can use to describe your character.  Since a d100 system was used, I’m going to wing it. 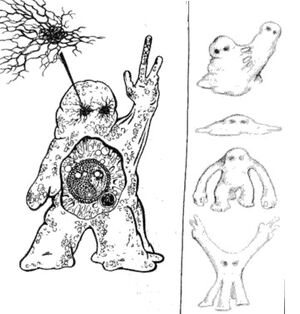 Dralasites are short, rubbery aliens that have no bones or hard body parts. Their skin is a flexible membrane that is very tough and scratchy. It generally is dull gray and lined with dark veins that meet at the Dralasite’s two eyespots.
Ability Modifiers: +2 Strength, +2 Constitution
Speed.  Base walking speed is 20 feet
Proficiencies. Insight
Elasticity: A Dralasite’s skin is stretchable and supported by a complex muscle structure. This allows them to change the shape of their bodies, within limits. They can “grow” arms and legs to use for walking and handling tools and weapons, and re-absorb limbs when they are not needed. A Dralasite can have a number of limbs equal to its Dexterity divided by 2, rounded down for a minimum of 4 total. The player must decide whether a limb is an arm or a leg when it is grown. Growth makes movement 0 feet during his turn. A dralasite needs at a minimum of 2 legs to be able to walk at base speed, for every additional leg (up to a maximum of 5), speed increases by 5ft.  This will give a dralasite a maximum movement of 35 feet. For additional arms above 2, the Dralasite gains one additional attack during an attack action, but must have 2 legs for melee attacks.
Lie Detection: All Dralasite characters have an increased chance to realize when someone is lying to them. They receive advantage on Wisdom(Insight) checks. 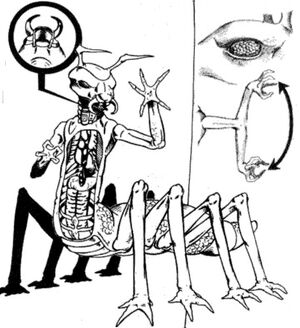 A vrusk look like large insects. Eight legs grow from their abdomen, four on each side. Their torso is upright in front of the abdomen. The torso is humanoid, with two arms connected at the shoulders.
Ability Score Modifiers. +2 Dexterity, +1 Charisma
Speed.  Base walking speed is 45 feet
Proficiencies. Deception
Ambidexterity. All Vrusk are ambidextrous and gain an ability to use weapons in both hands.  Any one handed weapon can be used in either hand. They can basically use two weapon fighting with anything without penalty.
Comprehension. Because Vrusk have such a complicated society, they are able to understand all sorts of social dealings. All Vrusk characters gain advantage on Charisma(Deception) skill checks. 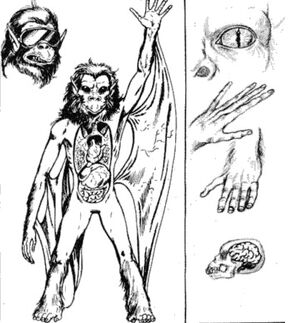 Yazirians are tall, thin humanoids. They have long arms and legs and slender torsos. Two large flaps of skin called a patagium grow on either side of their bodies, attached along their arms, torso and legs. When a Yazirian raises its arms, this membrane is stretched tight and forms a sort of wing.
Ability Score Modifiers. -1 Strength, +2 Dexterity, +1 Intelligence, +1 Wisdom
Speed.  Base walking speed is 30 feet. (Special gliding)
Proficiencies. Stealth
Battle Rage: Yazirians train themselves to go berserk in battle. A berserk Yazirian gets advantage during melee attacks.  To become berserk, during combat, if a critical melee hit is made, then he goes berserk and gains advantage for the remainder of the combat, and gains resistance to bludgeoning, piercing and slashing damage damage.  Berserk can be maintained with concentration between encounters, but is lost after a short rest. All Yazirian characters gain advantage on Dexterity(Acrobatics) skill checks.
Gliding: Falls from greater than 10 feet do not cause damage if conscious and you are able to glide.  With Gliding, you can travel a maximum of 30 feet for every 30 foot drop vertical descent.

There are three main backgrounds/PSA for Star Frontiers: Military, Technical, or BioSocial, and those were broken down into specialties. But I’ll make it simple with three categories.  I plan to make some additions and clarifications to this later.  So please bear with me as I flesh it all out.  I will be making updates as I move along to this blog post.

EQUIPMENT
You start with the following equipment, in addition to the equipment granted by your background:
Standard Equipment Pack and 10 credits.  Log book of travels.

I plan to detail and add the archetypes here.

You will need rules for multi-class if you are mixing in starting with DnD5e classes and moving off world into the Star Frontiers campaign.  So it would work both ways, and so treat this as a non-magic using class for multi-classing purposes for spells.

Skill Proficiency: Intelligence (Investigation); Charisma (Persuasion)
Tool Proficiency.
Languages.
Equipment. 100 Credits
Feature. You have a tiny robot companion to keep you company and monitor your vital statistics. It speaks to you through radio communication directly to your brain.

Critical Failure! We Ran Out of Bandwidth