A Guide to Roleplaying Lizardfolk 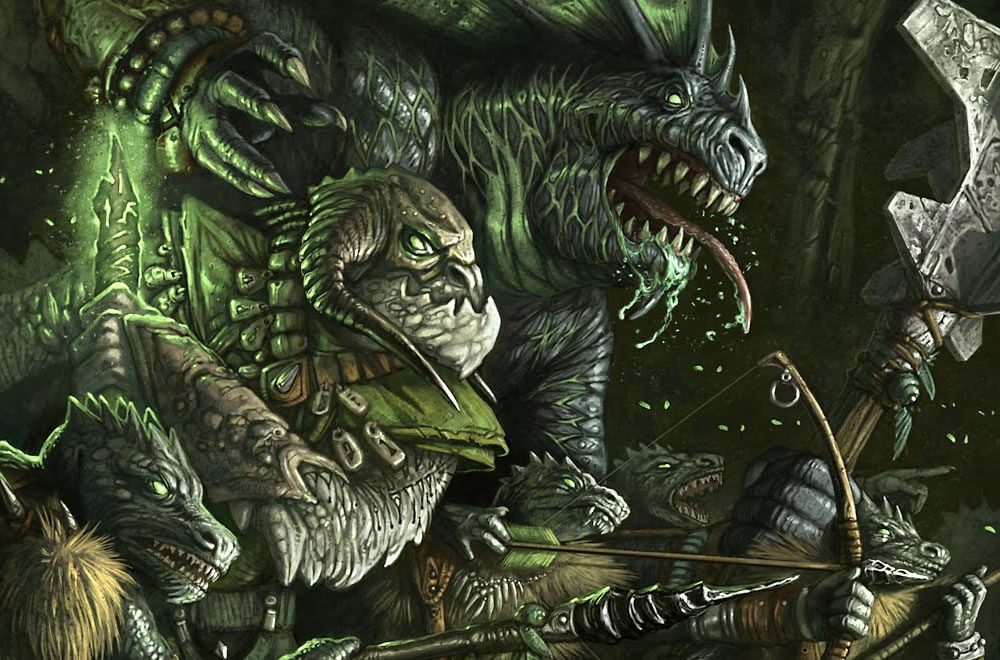 Lizardfolk are one of my favorite races in D&D. Who doesn’t love massive scaly swamp monsters? They are mechanically interesting and have a ton of interesting roleplaying hooks that present challenges and opportunities for even the most veteran roleplayer, all while presenting the question: Do lizards dream of electric eels?

For more guides to roleplay your favorite race in Dungeons & Dragons 5e check them out here: elf, half-elf, half-orc. A new guide published each week.

The core maxim of the lizardfolk is this: Survive above all. The world is divided into three simple categories for lizardfolk:

Lizardfolk can be found in Volo’s Guide to Monsters and they are described as having an alien and inscrutable mindset that is difficult for humans to understand. Instead of feeling emotions as personal experiences, lizardfolk experience them in a detached, non-personal way, almost like how we might treat a fact.

They experience fear, but the fear simply is, there’s not so much a subjective appreciation of the fear. That dragon is to be feared and avoided because it can cause harm. The visceral gut reaction of a mammal is absent.

This extends to the other two core base motivations, as Volo’s puts it, aggression and pleasure. A thing is to be attacked or acted aggressively toward because it can cause harm or can be eaten and the lizardfolk thinks that it can defeat the creature. A thing is to be protected, even nurtured, because it brings pleasure whether that is in the form of safety, physical pleasure, or something resembling what we might see as a social bond.

Volo’s also mentions that lizardfolk don’t plan much for the future, focused instead on the immediate needs of the present. They live in such harsh environments that simple survival is all they can really focus on. It’s not so much a lack of planning, but an attitude of why plan when tomorrow will be the same as today?

Volo’s also implies that lizardfolk have very little in the way of culture, however, this to me is rather boring and a little reductionist as to what culture is. The methods that your tribe uses to make their tools, how you relate the hunting and survival knowledge that you are taught as a hatching, what creatures to avoid and which to eat — these all constitute culture.

When developing your lizardfolk consider what that culture looks like. They might not appreciate art like an elf, but do they write down cultural information, or preserve it in pictograms and drawing, or even recite it in a vast catalog of poems and aphorisms as part of an oral tradition?

What does your lizardfolk decorate themselves with or hold as important? Lizardfolk names represent a specific event that distinguished them from the others. What was that event? Why was it important enough to be named after?

How do you roleplay emotionlessness lizardfolk and keep it interesting?

Lizardfolk present the challenge of being a human trying to emulate a character whose mindset is explicitly non-human. There are a few different ways you can go about this.

The first is to embrace the utilitarian mind that lizardfolk exemplify. Keeping things in practical terms is one way to find an “in” into the character. Unsure of why an unfeeling lizard would join a bunch of mammals for an epic quest? Think about the practical reasons why, such as better food, preventing your home from being destroyed, or even wanting to protect them like your own brood.

Unlike other races, lizardfolk are not driven by wanderlust or even ambition. Keep it simple and stay literal. That, coincidentally, is the advice that is given in Volo’s as to how to speak like a lizardfolk. Be as literal as possible and even give names based on the practical reality of someone rather than these strange metaphoric names. Like Barndron the human rogue might be called Shadow, or Stabby, by a more practical-minded lizardfolk.

Develop reasons for why you work with each member of your party. The bard is good because his songs make my scales nice and shiny. The fighter is good because she prevents people from attacking me. The wizard is scary because they could blow me up, but they are good because they are soft and fleshy like a hatchling and I must protect them. Also, they blow trolls up.

Scaliness is next to Godliness

You can extend this sense of utility to other aspects of play. It opens up some fun possibilities to look at the world as described by the DM and ask “What can I make from all this?” Try to come up with clever ways to use your surroundings. Your racial traits support this.

After all, what use is it to be able to craft simple weapons from the defeated and have the skills offered by Hunter’s Lore if you don’t use them?

Remember that despite being cold and calculating, you are not mindless. Logic dictates many of your actions. Strange as it may seem, lizardfolk could be the most level headed of the party, capable of making decisions based on the facts at hand, evaluating them for what is the best course to achieve their goals. In this way, they are kind of like big, green, swamp-loving Vulcans.

Playing your lizardfolk against type

All of this considered you can also decide that your lizardfolk is not like other lizardfolk and actually does experience their emotions or does have ambitions of making a name for themselves. Maybe that is why they left, to find out why and what to do with these strange things called feelings.

Maybe your lizardfolk learned how to sing from a passing merchant barge and now wants to create songs for her tribe, but needs to seek out new songs to incorporate?

Maybe your lizardfolk found a wizard’s spellbook and learned magic, or even got accepted into a prestigious wizard academy?

Playing any monstrous race presents the question of “Why is this one different?” Even if you are the most cold-blooded, scaly, clawed, fanged lizardfolk this side of Chult, consider what sets your lizardfolk apart.

Questions for filling out your lizardfolk’s backstory