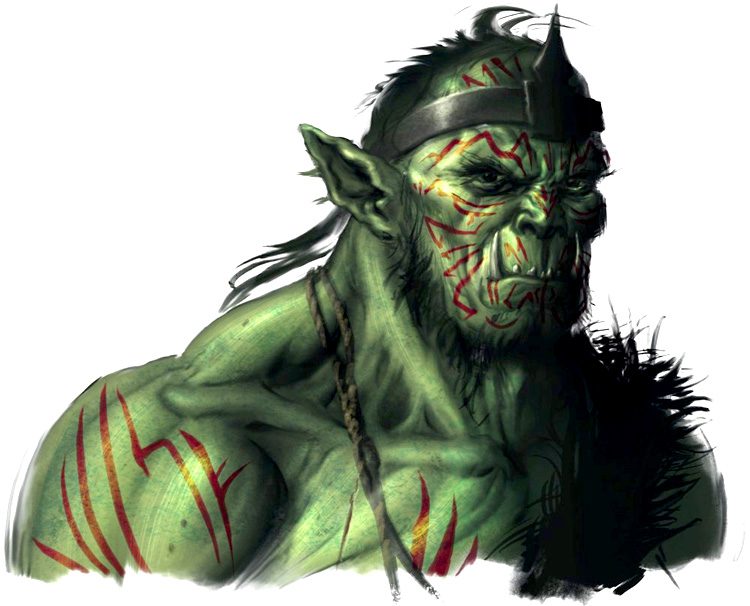 Over at the pathfinder_rpg subreddit, user ‘TheMightyBarbarian’ issued a challenge to create a world with nonstandard fantasy races. Specifically, the requirements were that ‘1 Core Race (Humans, Halflings, Elves, etc) 3 Featured (things like Half Elementals, Half Angels, Drow, Catfolk) and 2 Uncommon (assorted weirdos)’ would all be the most common movers and shakers in the setting. I decided to roll randomly and had to create a world focused on the following: Grippli (Frogmen), Irfit (half human, half fire elemental), Catfolk, Half-Orc, Strix (Black skinned winged humanoids), and Aasimar (Half celestials). I especially liked the challenge of working with 3 half human races but not humans themselves as a primary race.

What I came up with was Rescentia.

In Rescentia there are few who know the truth of the legendary ancients, races whose craft and architecture can still be seen standing proud despite the centuries of desecration. Wondrous artifacts, magic items, places of power, and forgotten lore all speak to the ancient peoples.

All gone now, only echoes remained.

It is important to understand that before Orc-Tide was a time where the races of Rescentia played at war each other, thinking that they knew the cost and horror involved. When the Orcs burst up from the underdark, they brought a new kind of war.

The war of numbers.

Orc-Tide is the name given to the series of wars, eradications, and campaigns that lasted for centuries wherein the orcs became the dominant race of Rescentia and very nearly almost succeeded in becoming the *only* race with a significant presence.

No one can argue against the valor and power of the ancients; bards still sing of their heroism and the land is still shaped by their magics. But for all that, they simply fell to the endless hordes. Orcs bore fifty children to every one born of all the other races and they matured in less than a decade; even with their mortality rate within a century of arrival orcs were one of the most populous races on the surface. And while the greatest warriors slew the orcs in their thousands and fell magics felled them in their hundreds of thousands the orcs marched on in their millions.

Perhaps; perhaps if the ancients had learned to work better with one another, perhaps if some of their heroes had succeeded at this or that quest for ancient power, or perhaps a critical war-chief would have lost a challenge from a less canny orc leader history might bear a different tale- Rescentia might be a different place. Or the Orc-tide might have succumbed to infighting and their inability to craft. But, as fate would have it, early orc raids of human settlements provided a ready stock of slaves, first humans primarily and then a caste of hardier half-orcs; able to fill so many of the roles the true-blood orcs themselves found incapable of filling. Whatever might have been can not change what was. In the course of several centuries, the orcs smashed more or less every ‘civilized’ power and were within a stone’s throw away of achieving complete domination of the whole of Rescentia.

The forest still echoes with anguish and madness around the final fortress tree where laughing orcs dropped the last eleven babes ever to be born from the highest boughs. Tiny, delicate shards of bones litter the leaf strewn forest floor for miles. Adventurers claim the dead walk and weep; guarding in death what they failed to protect in life.

Next fell the dwarves, defiant till the end.

When the orcs finally broke through the massive stone gates of Dalunfar and spread about the city to ravage and ruin; the last defenders unleashed their final counterstroke. Cracking open huge stone slabs, the dwarves diverted the underground river into the magma vents that powered their titanic forges. This final weapon filled the ancient citadel with great plumes of steam -boiling every dwarven man, woman, and child along with every orc attacker alive in their skin. Explorers claim that this steam intermingled with the rot of the mortifying flesh of the dead to create a deadly miasma the like Rescentia had never seen; one that persists to this day. Tales tells of twisted shapes that still stalk through the putrid haze.

With the loss of their two main allies, the human cities fell one by one. One small curiosity remained. Throughout countless cities where her worship was common Mierva -goddess of trade, the winds and protection- is said to have taken pity on her worshipers after hearing their innumerable prayers for mercy. Congregations gathered in temples and sealed the doors, and when the orcs finally pried them open they discovered no humans, no bodies, only the words ‘we will return, we will reclaim’ scrawled along the temple walls.

The orc-tide could not be stopped, though in places it was slowed. In the mangroves, militant grippli druidic zealots organized their kin for successful hit and run raids; fought hard enough to convince the orcs to turn their attention elsewhere. Amongst the dunes, men called forth and merged with creatures of flame to burn back the orc-tide, the nomads becoming the emberkin of today. Amongst the mountains and crag lands the Strix harried the Orcs endlessly -picking off all sorcerers, archers, and leaders until the Orcs turned back and away towards softer, less irritating targets. And everywhere and nowhere, the catfolk hid and ranged -staying one step away ahead of the horde and specializing in living where the Orc-Tide wasn’t.

But all would have fallen to Orc-Tide had not the conquerors turned on themselves.

When all the ‘easy’ gains of war were had, the Orcs looked out at those races and societies that still existed. They could and would be crushed under orcine heal; but each campaign seemed like so much long slogging war for puny gains compared to the rich plunder that had been readily available from Human, Elf, and Dwarven lands.

Plunder taken and now held by older warchiefs, ones that had perhaps grown fat and soft.

The infighting that had always plagued the Orc-Tide rose until it was the most important war the orcs engaged in. True-blood orcs fell in greater numbers while the number of slave ‘half-orcs’ (orcs with a noticeable trace of manblood in them) grew in number and importance in orc society; given ever greater leeway as the tribes reliance on them grew.

Eventually, under the direction of a war-bard known as Aytol, the half-orcs organized and rebelled in an insurrection that lasted one hundred and fifty years. The half-orcs were utterly brutal to their masters, having no illusions as to what it would take to win their freedom. In the course of liberating themselves the former slaves grew obsessed with purity, launched vicious pogroms wherein they slaughtered creature that was seemingly more than 50% orc. Customs grew where members of their own rebellion who were (or at least appeared) least ‘orcish’ gained status.

The emberkin, grippli, and catfolk saw the insurrection and each took the opportunity to push back the tide: centuries of slowly losing ground to the orcs were reversed and overcome as they met the remaining tribes with armies on the field and with assassins creeping through the shadows.

When the power of orcs had finally been broken, when the tribes had been killed or driven into hiding in caves and dark forest, a great prophet came amongst the half-orcs and preached that the time had come to abandon their orc nature of warriors and reclaim their human nature as builders. The half-orcs then set about the great work of reclaiming and rebuilding what ruins remain. With no single king to unify them, they cleaved to their hard-won freedom, each settlement and band of half-orc formed its own governance.

The half-orc city states have since skirmished with the grippli and the emberkin both, but it was the return of play-war – war for gains & politics and not war for eradication. And then the ‘Reclaimers’ arrived on Rescentia and true war threatens to bloom once more.

Be sure to check back later this month when we post part 2 of this series, where we discuss the cultures and races of Rescentia today. And while you’re at it be sure to click one of the share buttons. So what do you think of Rescentia so far? And do you have an experience making or playing in a fantasy world with non-standard races?

Note: this is part 1 of a two part series. If you like what you read, be sure to check out part 2 where I delve into more detail concerning the races of Rescentia and its modern politics.