The Three Musketeers & Swashbuckling Ideas for Your Next PC 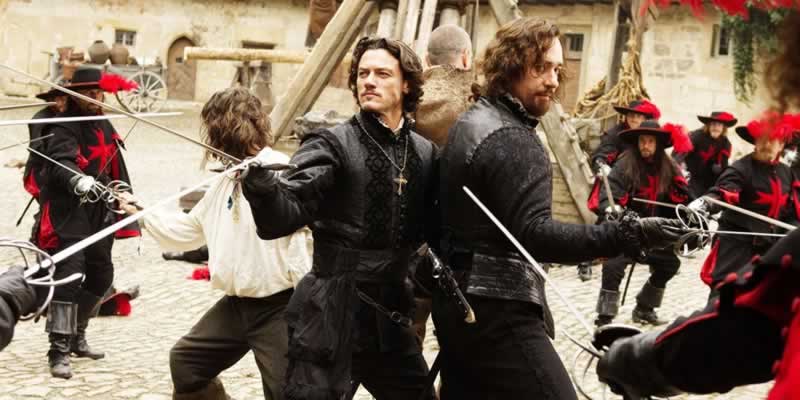 Are you looking to stop a plot against the King or sail the high seas in search of adventure?

I love the Three Musketeers book, the movie from 2010 (yep I do), and the current TV show. I also like building out characters inspired by my favorite characters onscreen such as the Fantastic Four, Avengers and Guardians of the Galaxy. This week on the Campaign Trail, I thought I would provide a collection of swashbuckling PCs inspired by these iconic characters that can be used in a swashbuckling adventure.

There are a ton of great systems out there to use to run a group of swashbuckling heroes saving the day such as Pathfinder, 7th Sea, FATE and even Swashbucklers of the 7 Skies. D&D is also an excellent system to create a variety of swashbuckling characters. Whether you are a player looking for a character idea, a DM who needs some pregenerated characters for a one-shot, or just some guy who likes reading stuff about things… grab your rapier and let’s get building.

swash·buck·le (verb)
engage in daring and romantic adventures with ostentatious bravado or flamboyance.

About these Swashbuckling Builds

Here are stats and more for the Musketeers!

Even more swashbuckling ideas will be provided next week with a bunch of NPCs, including Buckingham, Rochefort and Cardinal Richelieu.

D’Artagnan’s name has become synonymous with the fearless, swashbuckling swordsman adventurer. This foolhardy, brave and clever young man is the Three Musketeers’ main character. He leaves his home in Gascony and heads to Paris seeking his fortune, taking almost nothing with him other than his his good looks, integrity and his expert swordsmanship. Despite stumbles early on, d’Artagnan makes friends with the Three Musketeers, becoming a full member.

D’Artagnan and the swashbuckler rogue archetype are a great match, allowing him to focus on dueling his foes. The humble beginnings of a Folk Hero background best match the journey of this boy from Gascony to hero of Paris. D’Artagnan would work well as a battlemaster too. This build is a standard, but still lots of fun to play as you dart around the battlefield and challenge foes. As a swashbuckler, D’Artagnan can be effective with two weapons when using Fancy Footwork, but he would need the Dual-Wielder feat to be effective with two rapiers. With the Lucky feat D’Artagnan can act with reckless abandon too.

Athos (or Count de La Fere), has never recovered from his marriage to Milady and often seeks solace at the bottom of a bottle of wine. Athos is the oldest and most aristocratic of the Three Musketeers, even acting as a father figure to d’Artagnan.

The battlemaster archetype offers a ton of flexibility to create a dueling fighter that is the swashbuckling equal (or better) of the rogue swashbuckler archetype.

Aramis (or René d’Herblay), is a handsome young man who is pulled between his religious calling and his fondness for women and scheming. Aramis was brought up in a monastery and it was assumed that he would become a priest. His future took a drastic turn when met a young lady who he fell in love with. This circumstance unfortunately pushed Aramis into a rivalry with an officer, who he killed after mastering fencing for a year.

The Aramis in this build isn’t afraid of a head to head battle, but is just as happy to attack from the shadows. His Acolyte background represents his past and perhaps his future, when her returns to his calling. As a rogue, Aramis can be effective with two weapons, but I think he might choose to use Cunning Action in most cases.

Porthos (or Monsieur du Vallon), is a dandy who loves the finer things in life such as fashionable clothes and is always on the lookout for a way to make a fortune for himself. He compensates for being the least brainy of the quartet with his strength of body and character. Porthos takes pride in his good looks and his fine physique, always making sure he is dressing to impress the women of society. He is devoted to good food and comfortable surroundings. Porthos is so enamored with the finer things in life that while he wasn’t born a noble, he has demanded a position of privilege in society and a noble background works well for him.

This Porthos build uses his brawn to overpower his enemies, providing power and muscle to go along with the agility and panache of the rest of the musketeers. Porthos uses his strength to attack with a rapier or his bare hands. He is much too refined to be a barbarian, so I thought the champion archetype of the fighter would work best with a level of monk, giving him an unarmed attack as a bonus action and let him get more crits. I’d be tempted to take the Grappler or Dual Wielder feat eventually too. 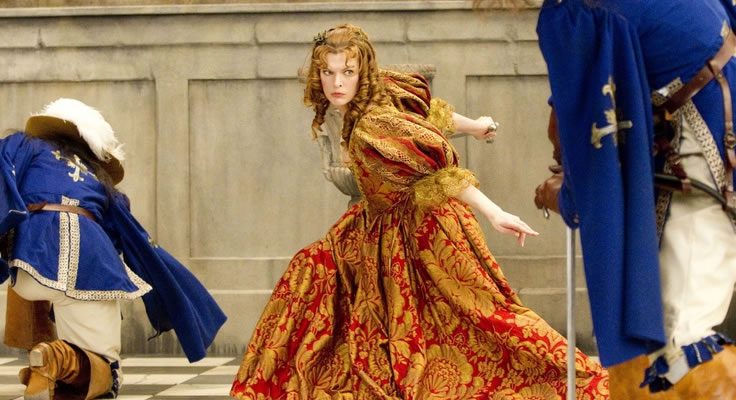 Milady de Winter, often referred to as simply Milady, is a beautiful and spy of the Cardinal Richelieu, she is also Athos’s ex-wife.

She is a spy for Cardinal and is one of the dominant antagonists of the story. Her role in the first part is to seduce the English minister, the Duke of Buckingham, who is also the secret lover of Queen Anne of France. Hoping to blackmail the Queen, Richelieu orders Milady to steal two diamonds from a set of matched studs given to Buckingham by the Queen, which were a gift to her from her husband, King Louis XIII. Thwarted by d’Artagnan and the other musketeers, Milady’s opposition of d’Artagnan carries much of the second half of the novel.

Jumping back and forth over the fine line between friend and foe, Milady provides interesting ideas for building a PC and a ton of roleplay hooks for the group, especially Athos. This Milady build provides a PC that is skilled at combat and deception. Milady should work just as well with the Assassin archetype, if you don’t like the thief below. As a spy she uses her thievery and acting skills to conduct espionage rather than petty crimes. As a rogue, Milady de Winter can be effective with two weapons, but I think she might choose to use Cunning Action in most cases.

Next week on the Campaign Trail…

Getting Started With Mobile Frame Zero