A Guide to Roleplaying Goliaths 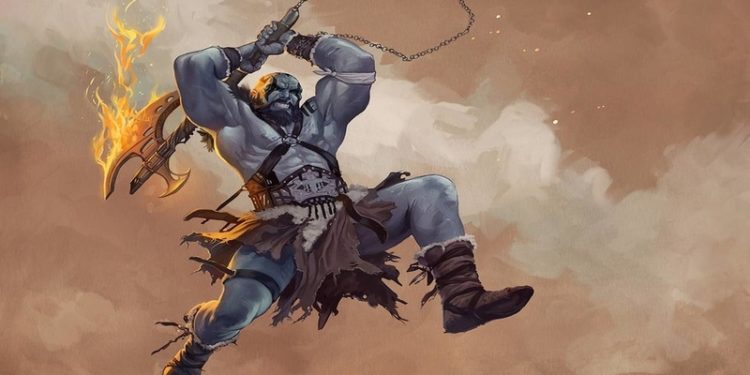 Goliaths are one of my favorite races. These strong bois are adapted to the harsh environment they inhabit. Descended from giants, goliath culture is one in the same vein of many warrior cultures, where fame and honor are paramount, but they have a unique spin in that their cultural predilection to compete with others is less about aggression and more about survival.

I absolutely love playing characters whose primary goal is to be Big and Break Things. Goliaths embody this, but their drive to compete can be made manifest in more subtle ways than just benching more than someone else.

Goliaths put stock in skill over talk, and when playing one, consider keeping track of what feats your party and NPCs have accomplished. You can use this as a kind of ranking, determining who you respect and whom you pity.

They are not ones to keep their opinions quiet, and when you spot incongruities between skill and power, point them out loudly. Encounter a noble who can barely swing a sword? Why feign respect to someone who has done nothing to earn it?

This sense of earning your right to survive is the core of goliath culture. Meeting the basic necessities of life is a constant struggle for goliaths who grew up in the mountains. There is so little to go around that you must prove you are worthy of the food, shelter, and clothing that the tribe provides.

Even those rare goliaths that live among more fertile lands may still carry a sense of needing to prove themselves. Perhaps even more so, as other goliaths may see their life among fields of plenty as a sign of weakness. A true goliath would learn to rely only on the skill of her hands and the strength of the tribe.

If you are playing a caster, take into consideration your relationship with magic. Goliath culture looks at magic much in the same way it might look at a tool, with simple pragmatism. You may even be wary to use it in every situation lest you become dependent on it.

If your goliath worships a god, it is likely that such a deity earned the goliath’s respect, or perhaps they proved themselves worthy of a god’s attention. In one campaign, I played a goliath cleric who worshiped the Mountain Father, a cold, distant thunder god who only grants his blessings on those goliaths who survive his trial and live. The trial involved holding a metal pole in a thunderstorm and surviving the lightning strike.

Competition for goliaths is not just a matter of pride, but one of survival. To compete with others and with your past self means to forge yourself into a useful and “good” member of the culture. This competition is not selfish, as adults who don’t contribute to the tribe are expelled. Perhaps that is why your goliath has adopted the life of an adventurer. This would connect with a desire to dungeon-dive for wealth and powerful items. This greedy goliath is motivated by a similar push to out-shine but at the cost of others.

The goliaths don’t see competition as happening on anything other than an even playing field. Fair play is core to their sense of ethics. Competition is a measure of “talent, dedication, and effort.” Anything that tips the contest in one direction or another can spell disaster if that advantage is too heavily relied on. Sometimes that advantage can become a crutch and many a goliath tale is filled with stories of those who grew too dependent on a favored item, spell, or trick and found themselves beaten when the advantage crumbled.

This acknowledgment of the transitory nature of life extends to a greater sense of their own momentary existence. They will die. Death is all around them, but it is the strong who survive through their deeds.

Proving the Self – Who Are We But Our Deeds?

Goliaths are waging a war against decay in many ways. Their drive to compete, to prove themselves as greater than all others is similar to the main motivation of Gilgamesh. He was an ancient Sumerian King who struggled against the inevitability of death, decay, and time. He dedicated himself to seeking out the source of immortality, only to have it snatched away.

In the end, Gilgamesh earned a different kind of immortality. Here we are thousands of years later still talking about him and his adventures. Your Goliath may be motivated by the same need: to prove themselves worthy of the only immortality available to mortals.

After all, what truly remains of us when we die if not our actions?

Questions to ask when creating a goliath backstory

For more guides to roleplay your favorite race, check them out here: elf, half-elf, half-orc, lizardfolk, human, dwarves, halflings, dragonborn, goblin, gnome, tiefling, aasimar. Next week is the final guide for this first series (we’ll be shifting focus with the help of Changelings 😉 ). If I haven’t covered your favorite race, comment below and I’ll add it to the list for the next series of roleplay guides.