The Schemes of the Archfey, Part Two 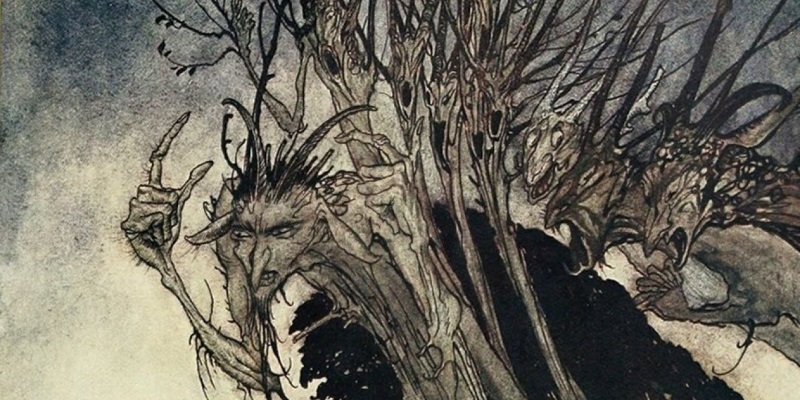 Last time in my series of articles on the fey, I presented story hooks for the first five Archfey. Now I’m going back to that topic, with story hooks and interactions for the Green Man, the Night Collector, the Sea Hag, and the Thornweaver. Though three of the four are Unseelie, I’m still avoiding things like “go beat this Archfey to death,” because I figure that anything that obvious, you can handle on your own.

The Green Man is generally benevolent toward mortals, and his approach to the world is (intentionally or incidentally, as you prefer) about making it more habitable for them. How do we tell stories that involve the Green Man and some conflict?

Because of her mercantile role, the Night Collector is nearly a free agent within the Courts. She often uses the possibility of switching Courts as a lure to one side or the other. To convince the ancient and subtle Archfey, of course, it is necessary that she believe she’s telling the truth at the time – that she really might abandon the Unseelie if she were given the proper motivation. She’s obliged, then, to keep the threshold of “sufficient motivation” nebulous, something of a moving target.

So about that Sea Hag. The thing that makes her so incredibly dangerous is that her power base isn’t in the Feywild (probably) – it’s in the 70% of the world that is covered in seawater. Oceanic storms are deadly even in a modern tech axiom; in a classical, medieval, or early modern setting, sea travel is one of the scariest things that someone might do for a living.

What the Thornweaver wants from the world is to sit on a throne in a forest, be marvelously decadent, and watch a lot of horrific torture and blood sacrifice take place. He wants to be a tyrant in a very specific color palette. He wants this because he knows he’s just as good as the Green Man, but he can’t seem to win the recognition and credibility necessary to be the royal consort to the Queen of Air and Darkness. (It doesn’t help that his goal is only attainable in the seasons of the year when his Court is weakest.)

In the next fey article, I’ll cover the last five Archfey. Thanks to one reader’s article prompts, I’ll also eventually write about enchanted weapons of the fey and alternate Courts and court alignments. Thanks for reading, and I hope these story hooks spark some ideas for you!

Get to Know the Giants

The Salt in Wounds Setting for 5th ...