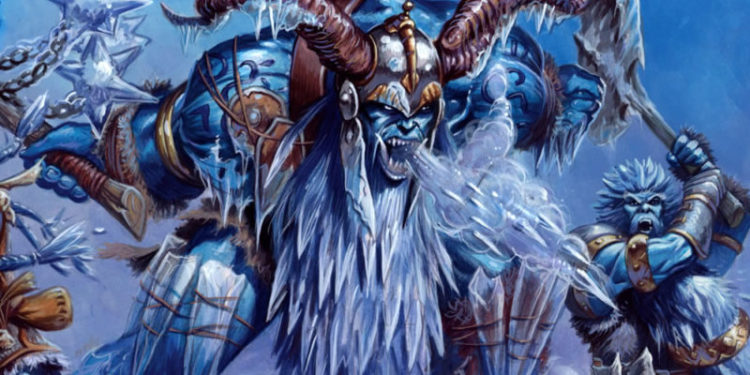 Are your adventurers freezing to death on their way to a frozen temple? Did your party just escape a prison to find out there is nothing but snow and ice in every direction? Let us do the work for you.

My players just entered the lair of a white dragon after exploring the frigid Winterbole forest surrounding her lair. I needed to throw some monsters and hazards at my players to demonstrate how harsh the environment created by the white dragon is. This article provides some ideas for using monsters and handling survival in an arctic environment. I thought I’d share some ideas on how to use stuff found in the official books and some of my own homebrew creations I have thrown at my players.

Challenge Rating: 2 to 7
I’m talking about draconic drakes here, not the high level bard from the northern wastelands of Toronto, Canada. I like how drakes fit into the world of D&D as simple, draconic guard dogs. When trained, chromatic drakes serve as effective guards for NPCs. When found in the wild, they can provide a tough encounter that matches up with the wilderness environment. I think drakes work especially well as thematic minions found in the region controlled by their dragon master. In my current campaign, an ancient white dragon has created many drakes to patrol and hide around her lair, ready for my PCs to stumble into.

Challenge Rating: 10
Golems are powerful automatons created by magic or elemental forces. To create a golem from the ice, simply take the Stone Golem (MM p.170) and tweak it to be ice themed. I think the changes below aren’t too major and it still works as a CR10 monster.

For my ice golem I used the stone golem stats and:

Challenge Rating: 2
The harsh arctic environment can kill a person in hours. Druids (NPC from Monster Manual page 346, not the Class from Player’s Handbook), that choose this freezing environment to protect and draw their power from, are not foes to be taken lightly. A druid, could just as easily be turned into an ally if your adventurers were able to help defeat a threat to the arctic (please not an evil wizard melting the ice caps).

Challenge Rating: 9
These awakened trees are most likely found in ancient and magical forests, but you could place them in a subarctic boreal forest, a thin evergreen forest found far to the north, or high on the side of a mountain. Adventurers should be careful not to cross these guardians who can call on the forest itself to ensnare and attack enemies. With some careful diplomacy from your party’s druid or ranger, the treants could become a powerful ally to battle against an enemy who is a threat to their forest.

In the Nentir Vale, the treants are in the midst of a civil war with each other, with the conifers in the north and the deciduous in the south. Your group could get involved in this conflict or just end up stuck in the middle of battle.

Challenge Rating: 8
These fierce and hardy warriors survive by raiding and pillaging the hard work of others. Instead of creating stuff, frost giants become really good at fighting and just take it from others who create. Visit a frost giant ice fortress or have the sound of a frost giant war horn announce their visit to a small northern village.

In my current campaign set in the Nentir Vale, the Frost Giants have been forced to serve an ancient white dragon named Bitterstrike. Facing a group of frost giants provides a decent battle to pull some resources out of your players on their way to fight a white dragon.

Challenge Rating: 1/2
These imp-like monsters are comprised of ice and air, they even look like an evil Jack Frost. An ice mephit can provide an interesting challenge for lower level groups with their frost breath and ability to blend into the icy background. Ice Mephits don’t usually speak Common, but you could tweak this monster to create a memorable Jack Frost like NPC bothering a village.

Challenge Rating: 3
While walking on sea ice have a hungry killer whale attack from below. In real life, orcas are majestic mammals that are abused by humans at theme parks to perform tricks. Let an orca get its revenge on animal trainers everywhere and bring the “killer” back to this whale’s name.

Challenge Rating: 6
A mammoth is an elephant like huge beast with thick fur, long tusks and the ability to trample, gore and stomp. These magnificent beasts are now extinct due to climate change, overhunting by early humans or another mystery. Give the mammoth another chance at life by encountering your group.

Challenge Rating: 2
This expert hunter can smell you miles and mile away. Polar bears would make a great random encounter in a snowy field and they are a tough enemy with a bite and claw multiattack. Have a momma bear face off against the party to defend her cubs for an aggressive bear and moral challenge.

Challenge Rating: 5 to 11
These huge arctic predators are best used as a surprise attack from under snow and ice in a cloud of steam. The ramorhaz will surprise even some experienced players with its ability to cause fire damage when touched and swallow them whole. Young Remoraz are smaller, but still a good fight with a challenge rating of 5. Try adding some icy hazards to create a tougher, more memorable encounter.

Challenge Rating: 3
Any wolf hunts in packs and has keen hearing and smell, but a winter wolf is both bigger and faster. Stealthy winter wolves have advantage when hiding in snowy terrain with snow camouflage and have immunity to cold. It should not be hard to surround your adventurers with winter wolves for a surprise encounter.

Challenge Rating: 2 to 20
The most animal like of the chromatic dragons are driven by hunger and greed. They are less tactical than the other more intelligent chromatic dragons, but they make up for it with their excellent hunting skills. Visit a freezing white dragon lair filled with frozen bodies, diamonds buried in the ice, shipwrecks, ivory and other trophies. A younger white dragon can be a nice entry dragon to fight for a lower level group, but the adult and ancient versions are tough enough to challenge most groups.

Challenge Rating: 3 to 9
High in the icy mountains, your adventurers are terrified by a horrible howl traveling on the wind. A huge abominable yeti is already hunting them and will not stop until its hunt is over and blood has spilled on the snow. Have hungry yeti escape to its lair after an attack against a mountain village, turning your heroes into the hunters.

Wilderness Survival in the Arctic

There are lots of great hazards to throw at players when they are exploring and traveling through an environment as harsh as the arctic. If used sparingly, you can create some memorable ways to remind your players just how deadly this environment can be.

The ability to gather food and water should be much harder in the arctic, than in a less harsh environment (DMG p. 111). Water is frozen solid and could even freeze in their water skins, requiring a fire or magic to even get a drink. Food of any type could be scarce or you could have large animals foraging for what little plant life exists under the snow and ice, and deadly predators who hunt them.

If you players are traveling in arctic conditions try rolling on a weather table (DMG p.109) to determine the temperature, wind and amount of snowfall they’ll have to face. If your heroes are traveling through arctic conditions created by magic (by a white dragon or wizard for example), just scale up the harshness of the conditions as the heroes get closer to the lair. If the heroes are going to be exposed to extreme cold for long periods of time, make sure to have everyone make Constitution saving throws (DMG p. 110). Combine strong winds and heavy snowfall to creare a blizzard, making it very tough to see and hear.

The D&D 5e DMG (p. 110-11) supports arctic hazards well with three examples. Check the book for ideas on how to handle Frigid Water, Slippery Ice and Thin Ice or use it to get ideas on how to handle your own hazards such as an avalanche or falling into a crevasse that appears while crossing a glacier. Try adding some hazards into your frozen battlefield to increase the difficulty of an encounter.

The arctic is a tough place to navigate and players can get lost even without being blinded by a blizzard. An endless patch of ice and snow with no landmarks combined with exhaustion can provide some some higher difficulty survival checks for your party.

Arctic conditions can be encountered as your players climb high into the mountains where they will have to deal with not just cold, but the difficulty of breathing at high altitude.

House of Horrors and How Not to ...